Being the church – a question of relevance in a secular society 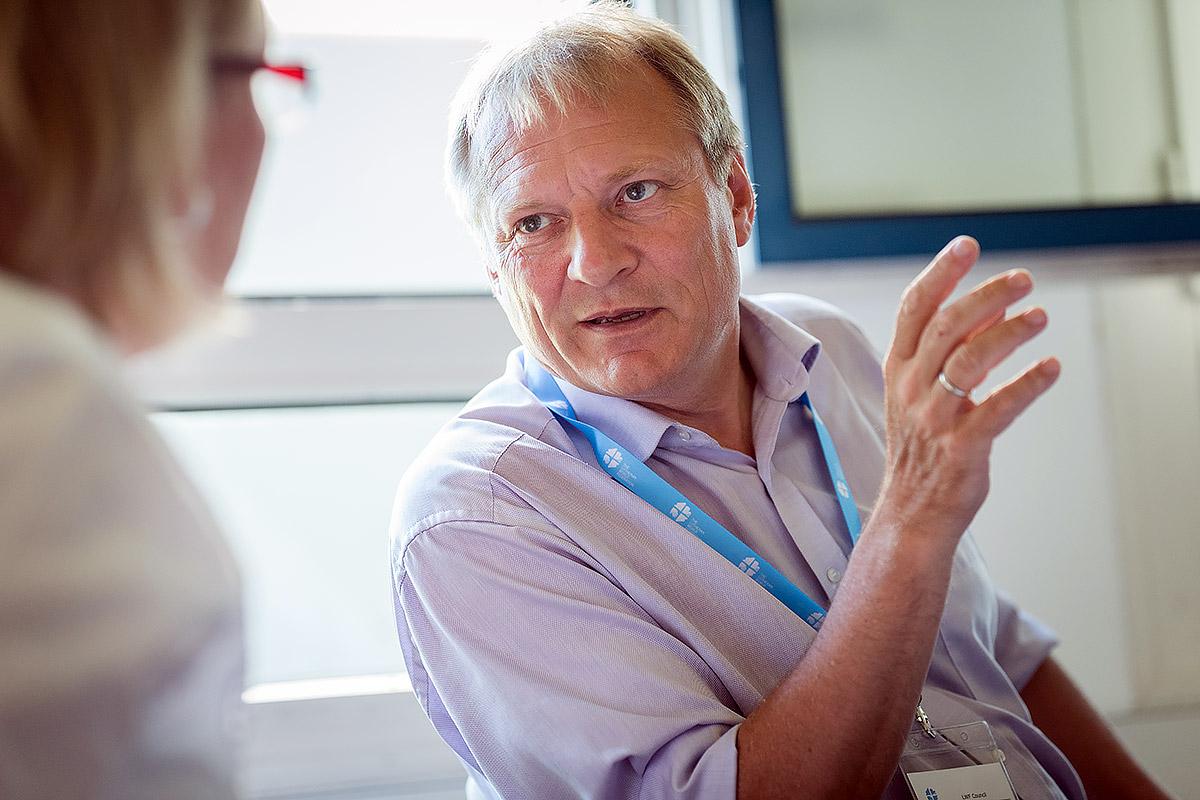 Henrik Stubkjaer is bishop of the Diocese of Viborg, Denmark. In the LWF Council he represents the Nordic Region. Photo: LWF/Albin Hillert

(LWI) – Henrik Stubkjaer (56) talks to the Lutheran World Information about the challenges of being the church in a secularized society and new platforms for the church’s diaconal work.

Since 2014 Stubkjaer has been bishop of the Diocese of Viborg (359,000 members), one of 11 dioceses of the Evangelical Lutheran Church in Denmark with 4.4 million members. Before that he served as secretary general in DanChurchAid from 2005 to 2014.

The Evangelical Lutheran Church in Denmark, sometimes called Church of Denmark, the People's Church or the National Church, is that country’s established church. The reigning monarch, Margrethe II of Denmark, is the supreme secular authority in the church. Each bishop is the theological authority in his or her diocese. There is no archbishop. As of 1 January 2017, 76 percent of the population of Denmark were members.

Bishop Stubkjaer, during the Twelfth LWF Assembly in Windhoek last year, delegates of the Evangelical Lutheran Church in Denmark – amongst others – raised topics which found expression in two resolutions: the Resolution on Strategic Priorities and Church Revival and the Resolution on Being Church in Context and its Role in Mission. What are your concerns behind these appeals?

In Denmark, the Nordic region and other European countries we experience considerable change due to secularization, post-secular trends and other societal and demographic factors. By raising these concerns in the LWF communion we are initiating a broader discussion of these topics.

We need well-founded theological research on this. We ask ourselves: what can we do to keep hope in the church? We probably need a new strategy on mission and on the diaconal aspect of being church.

I really hope that the LWF will take up these resolutions and create platforms to reflect on the developments we experience.

Could you elaborate on developments in the Danish church? What is the perception of the church in your society?

On the one hand, we can say that there is a strong connection between church and society. According to official statistics from January 2017, nearly 80 percent of Danes are members of the Church of Denmark. Membership rates vary from 58 percent in the Diocese of Copenhagen to 85 percent in the Diocese of Viborg. The numbers of members have been stable and are only slowly declining at a rate of less than 1 percent per year. Most youth go to confirmation preparation, and about two-thirds of couples get married in church.

On the other hand, one of our biggest challenges is to tell people that we are relevant as a church. Many people are church members, but the church is not really part of their life. Few attend the services on Sunday. Their attitude is: the church should be there when you need it.

One might even say that secularization has gone so far in Denmark that people don’t have any bad feelings about the church. They think it’s interesting. Twenty years ago, we had a lot more opposition against the church.

Where and how can the church be relevant then?

In our Danish society many people are really stressed and experience a lot of pressure: you must be better or faster all the time. Many end up on sick leave. The logic behind this is that you are what you do or what you produce – performance counts.

As a church we say something different: you are created, you are unique, you are loved by God, you are never alone. The most important part of your identity is given to you. I think that people in Denmark need to know: you are more than your performance. You are liberated by God’s grace.

Are you reaching out to people in new ways in the light of this?

In my diocese we have developed eight visions, one of them being “using opportunities”.

In the past, mission has not been a priority in Denmark itself. Now we need a different mindset. Our pastors have started reaching out to young parents who are church members, visiting them and inviting them to baptize their child and to answering any questions around that topic. Church members who don’t come for baptism say they want their child to decide that for itself when it is old enough. So, this form of mission is quite unusual.

For young people – to whom the church is largely invisible – we have started a new internet-based counselling project. They can call in or join a chat and talk to a pastor. The response is so overwhelming, we can’t keep up. Using the internet has meant that the church has become relevant for these young people.

Diaconia is a topic you are very familiar with. What developments and challenges do you see in Denmark?

Local politicians are seeing that there is a lot of pressure on the economy and the social systems. One example: our hospital system has changed. There has been a process of centralizing them to what we call “super hospitals” whilst the small hospitals have been closed. Parallel to this, the time patients spend in a hospital has decreased, amounting to an average of 18 hours.

This means that people are sent home from hospital at a very early stage. This is a parallel and massive decentralizing of the whole system. Instead of being nursed in hospital people are now lying in their bed at home, often with no one to take care of them, or to provide basic daily provisions.

Now politicians are looking towards the church to visit these people and to take up their needs. I regard this as an opening of a new platform for us to be church. Added to this there are issues such as increasing loneliness which doesn’t only affect people in the cities but also people in rural areas.

Diaconal work in Denmark has up until now been focused on big diaconal organizations. I think we are experiencing a shift now. Diaconal work will be focused on the congregations in the form of neighborhood work.

So, you see a new relevance of the gospel in the 21st century?

Twenty years ago, the intellectual elite pronounced that the time of religion and churches was ending. But they miscalculated the signs. Instead, people realized that spirituality is an important part of life.

We thought that society could manage all social challenges – but we realized, that the lack of economic resources left the most vulnerable behind, and there raised a new call for diaconal assistance.

For the churches in Europe, it is indeed a time of challenges. However, at the same time it is the time of opportunities.

For the churches in Europe, it is indeed a time of challenges. However, at the same time it is the time of opportunities. People living in a society often seen as very competitive really need to hear the liberating news of the gospel: You are loved by God, even before you achieve anything. Other human beings are not rivals, instead they are neighbors.

The gospel has an important message to the world against the growing social exclusion and the growing gap between the global north and south. And we, who believe in God’s creation of the world, must step up on the climate agenda.

The content of the gospel is as relevant as ever. We must just realize it and start acting on it.