Faith is a key resource for many women fleeing from conflicts, climate emergencies or gender-based violence. LWF and partners are exploring ways of strengthening the role of religious leaders and other faith actors in preventing violence against women and girls. 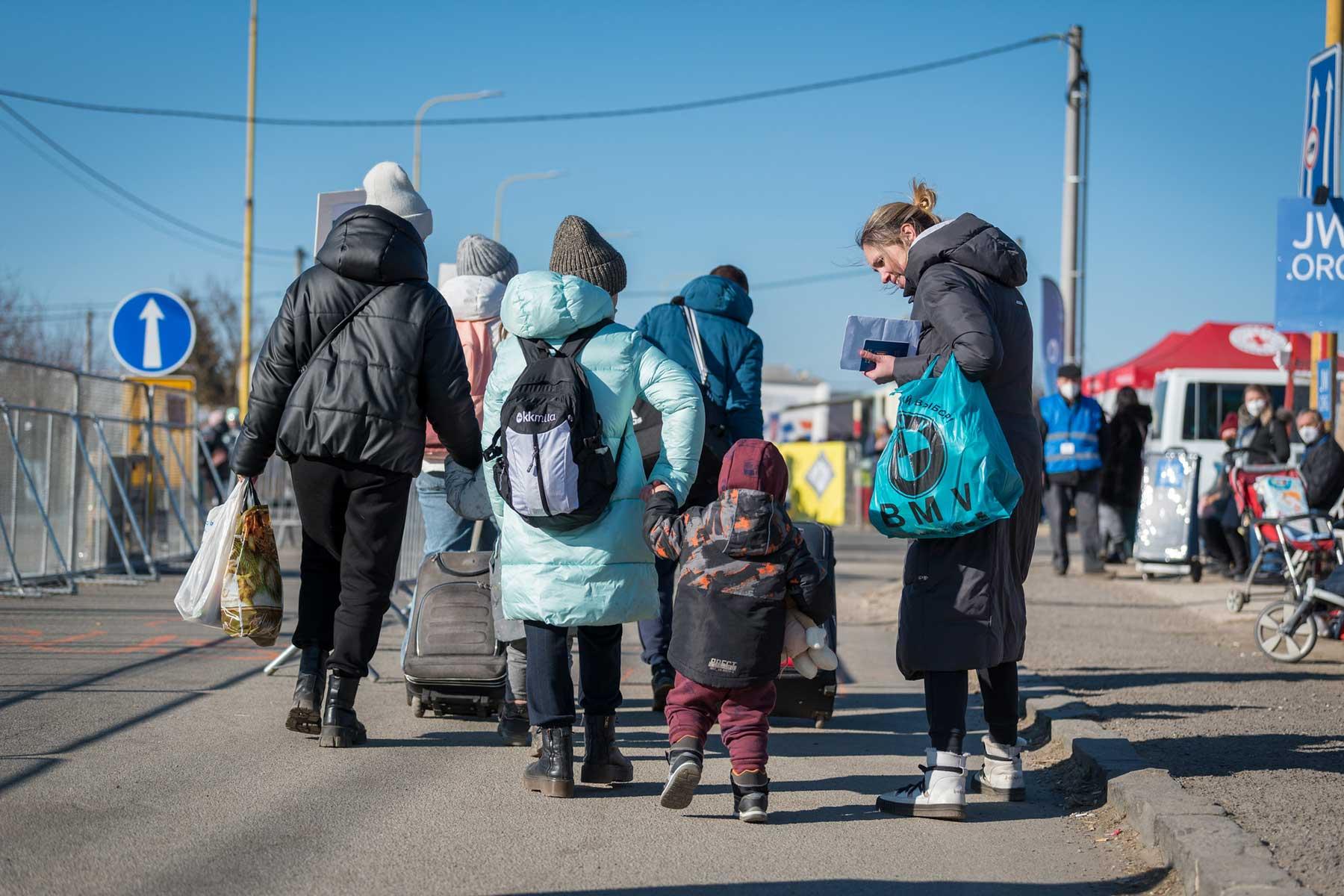 Women and children flee across the border between Slovakia and Ukraine following the Russian invasion in February 2022. Photo: LWF/A. Hillert

(LWI) - A new series of webinars entitled ‘Faith in Protection from Gender-Based Violence (GBV) in Forced Migration’ was launched on 7 December, exploring ways of stepping up the engagement of faith actors in the vital work of preventing violence against women and girls on the move.

The online event, which took place as part of the ongoing 16 Days campaign to end violence against women and girls, was organized by a number of partners including The Lutheran World Federation, ACT Alliance, Religions for Peace, Islamic World Relief, Faith to Action Network, Side by Side Movement, the University of Birmingham and the Joint Learning Initiative/Sexual Violence Research Initiative’s Religion and GBV Hub.

Dr Sandra Pertek, a specialist in gender and social development at the University of Birmingham in the UK, presented research showing how faith is a key coping mechanism for many victims of violence, but can also be a factor in what she termed “the gender-culture-religion nexus” that enables violence against women and girls.

Faith is a powerful resilience resource for many people who lose everything else when they flee.

– Dr Sandra Pertek, research fellow at the University of Birmingham.

“Faith is a powerful resilience resource for many people who lose everything else when they flee,” she affirmed, describing the way women use prayers, sacred texts and other traditional religious practices to help make sense of their traumatic experiences. Faith leaders “can be powerful actors in combating GBV,” she continued, transforming attitudes and beliefs, countering stigma, affirming the dignity and rights of survivors and denouncing violence in their communities.

Florence Nassanga, chair of Religions for Peace Uganda Women of Faith Network, spoke of the work that faith actors are doing, with funding by Finn Church Aid, to support GBV survivors in the Bidi Bidi refugee resettlement camp in north-western Uganda. Services include trauma healing and referral pathways, as well as humanitarian assistance and advocacy for fair resettlement conditions “Religious leaders are doing a lot,” she said, “and people listen to them, so they play a big role.”

Christian Wolff, Migration and Displacement Programme Manager for Act Alliance, shared experiences from Central America, in particular in Honduras and El Salvador where network members are working to strengthen the capacity of church leaders to respond to GBV. Among the requirements needed for a successful response, he noted, are the ability to speak the local language, to connect with national and local governments to make resources available and the creation of employment opportunities to provide economic empowerment for women.

Dr Anita Isakov, a sociology professor from the University of Belgrade spoke of her work for Save The Children to research the plight of unaccompanied minors on the Balkan migration routes. “Religion is an important resilience factor for these children who experience so much violence,” she noted. Girls “often use social mimicry to survive,” she continued, meaning that they may lie about their names, their faith and other personal data to be accepted into a new community. She stressed the need to work with different faith actors to provide trauma-informed support for children and their families.

Sana Basim, Mission East’s Head of Programmes in Iraq, shared her experience of working closely with Yazidi women who suffered during the ISIS reign of terror in the region. “Faith is still an untapped potential, a missed opportunity, not only to respond to the needs of survivors, but also to strengthen the response of the host communities,” she stressed. It was not only the victims themselves who were traumatized, she noted but also the communities that often rejected the women and their children, born of rape. Faith leaders played a key role in overcoming stigma, emphasizing the rights and dignity of these women and children, she said.

Commenting on the overall pertinence of the webinar, the LWF World Service Gender Justice Focal Point Caroline Tveoy noted that “LWF is continuously looking at how we can improve our work in the domain of GBV. Given the particular vulnerabilities and the high percentage of women and girls among today’s forced migrants, the topic is more pertinent than ever”.

She continued: “Following in the footsteps of the 2018 LWF and Islamic Relief Worldwide noted publication “A Faith-Sensitive Approach in Humanitarian Response: Guidance on Mental Health and Psychosocial Programming”, the link between forced migration, GBV, faith and religious resources represents an issue for further exploration.”