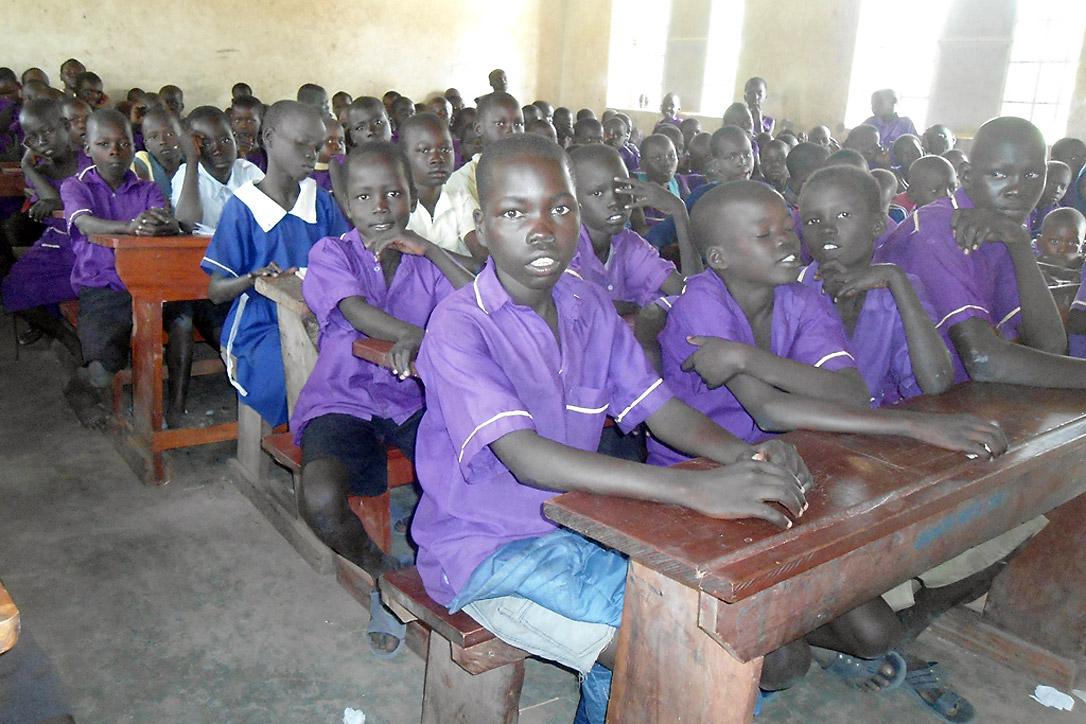 Emmanuel sits in class, supported by the LWF and safe from the violence he fled in South Sudan. Photo: LWF Uganda

In the course of their work, many African humanitarian workers are swathed in flashbacks of their own childhood, having themselves been victims of conflict. As they lament the plight of children affected by crisis, they continue to relive their own childhood pain. What was suffered as a child remains a permanent scar in the mind and heart.

One of these children is a South Sudanese refugee, Emmanuel, aged 11. He arrived in Uganda as an unaccompanied minor. He lost his parents in crossfire when the family attempted to flee their village in South Sudan. “There were gunshots everywhere and we tried to run. My father and mother were shot and I saw them lying in blood, dead. I tried following some adults but they hid away and I was left alone.”

Emmanuel was rescued by South Sudanese police who handed him to a woman with instructions to take him to police in Nimule, a South Sudanese town bordering Uganda. He spent two days at the police station, sleeping in a damaged car and with no food to sustain him.

“I decided to follow some of the people fleeing from Juba and later realised they were going to Uganda. Because I was too hungry and could not walk quickly, they chased me away. I lay down and cried out loudly, attracting the attention of more people. A good Samaritan gave me 5,000 Uganda shillings for motorbike transport to Dzaipi in Adjumani,” Emmanuel said.

At Adjumani, Lutheran World Federation staff placed Emmanuel in a protection house where he was later fostered by Loliha, aged 58. LWF has supported Emmanuel’s new family with food, clothing, money for basic needs and school materials. He was enrolled in Boroli primary school where he is now in primary two.

“I am happy with what LWF has done for me. I am not going back to South Sudan because I want to study and this country is peaceful. People are free and move around without fear. I will not go back to where there is a lot of conflict, where innocent people like my parents are killed.

“I want to study and work with a humanitarian organization like LWF. I want to help children who are orphans and all needy people. I lost my parents and I am now being fostered by an unknown person,” Emmanuel said.

Humanitarian organizations gave me a dream more than two decades ago, as a child engulfed in armed conflict in northern Uganda, and today, I am an aid worker.

Emmanuel's dream for the future

Emmanuel has been inspired by the LWF and has a dream to do the same thing that LWF staff did for him. We are all called to take action within our means to protect children’s rights. It can start with a dream like Emmanuel’s. In its work to respond to the humanitarian needs of refugees in Uganda, the LWF is committed to protect the rights of all children affected by conflict and crisis.

“Every time I am with refugee children at the camps, their yearnings, pain and disillusionment speak loud to my heart and the child in me would want to jump out and say, “I lived in that situation. I was there as well. I know what you feel. It is very painful and nothing will erase the invisible scars in the hearts, and so on. I hear and see them with my heart. The child in me screams to remind me that I was once in their shoes. That I belong to them.”

Betty Lamunu is a monitoring and evaluation officer in the LWF Uganda program.