“It will take years to recover” 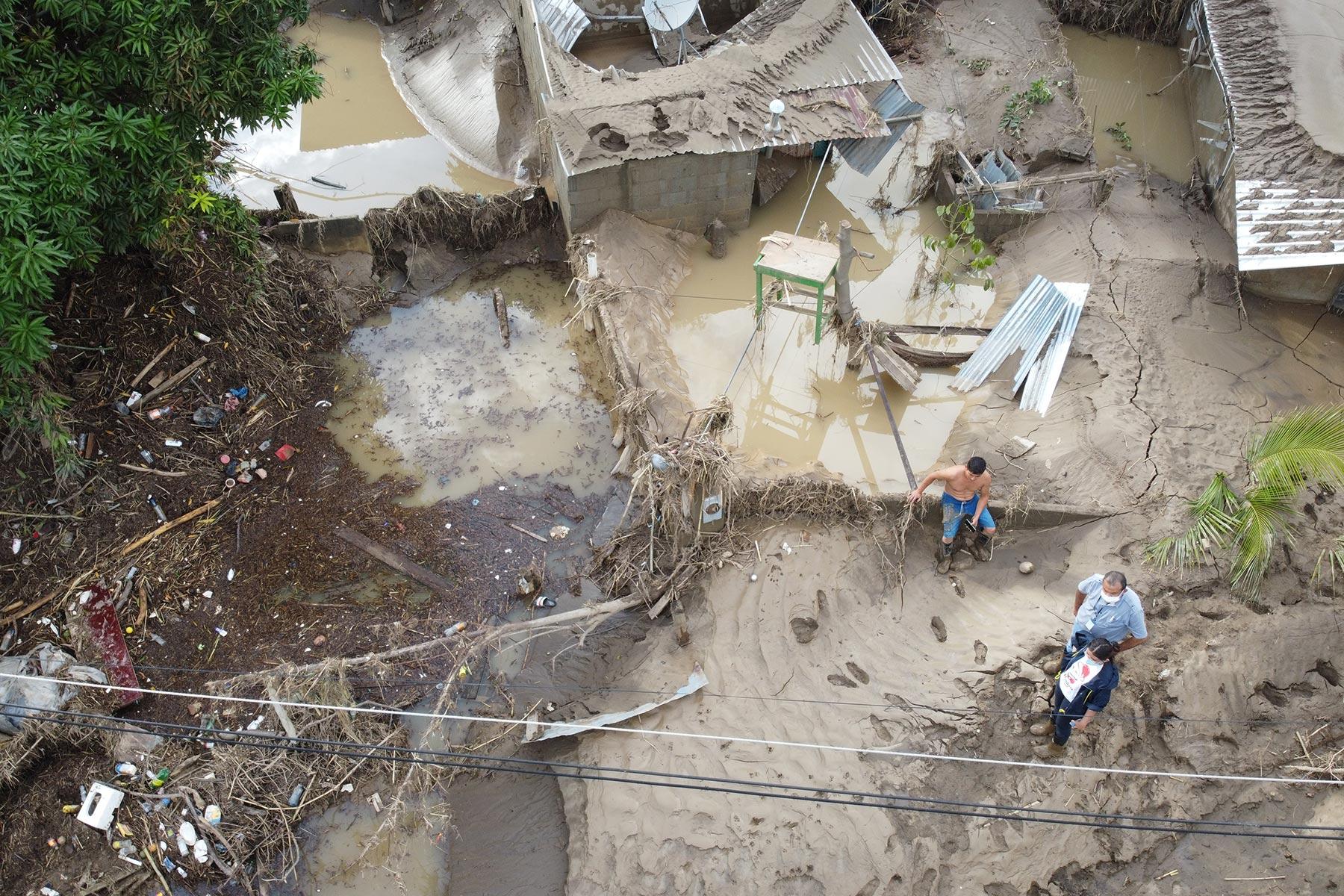 Honduras after the hurricanes

I’ve worked in Honduras over many years since the late 90s, working in emergency response and as a photojournalist. Recently I went to visit some of the areas that were worst hit by the double hurricanes in November 2020.

I spent a day with Rev. Julio Caballero, who is pastor in the Christian Lutheran Church of Honduras (ICLH), an LWF member church. With us was also Carlos Rivera, the representative of the LWF World Service program in Honduras. 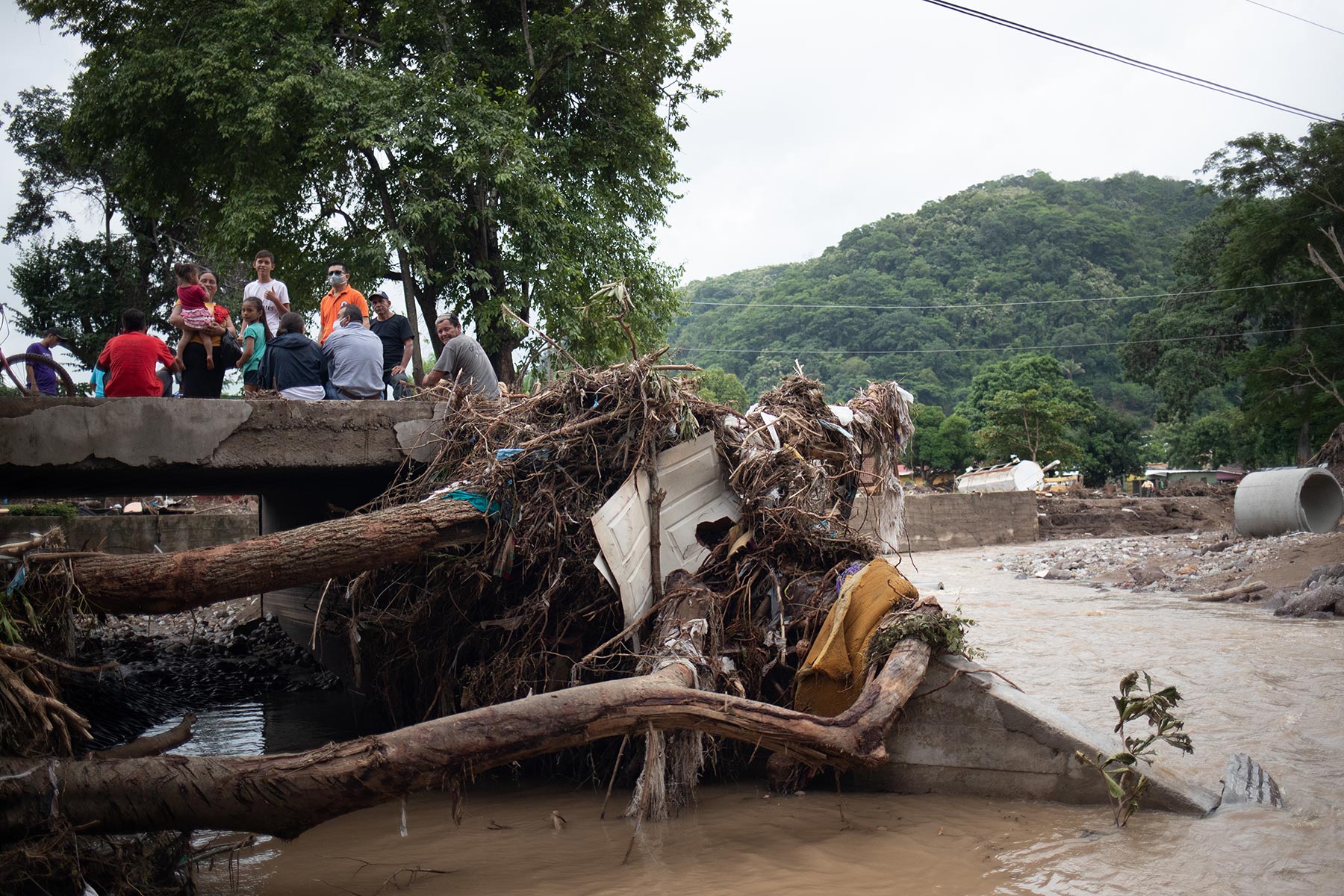 Pastor Julio Caballero (orange shirt) stands with local inhabitants on the broken bridge at El Calan, washed away and covered by debris with the flooding from hurricanes Eta and Iota.

They showed me through Chamelecón and El Calan in the north of Honduras. These are places that were known for poverty and extreme social problems before the hurricanes. Chamelecón, where Pastor Julio works, has been identified as the most dangerous neighborhood in the world. 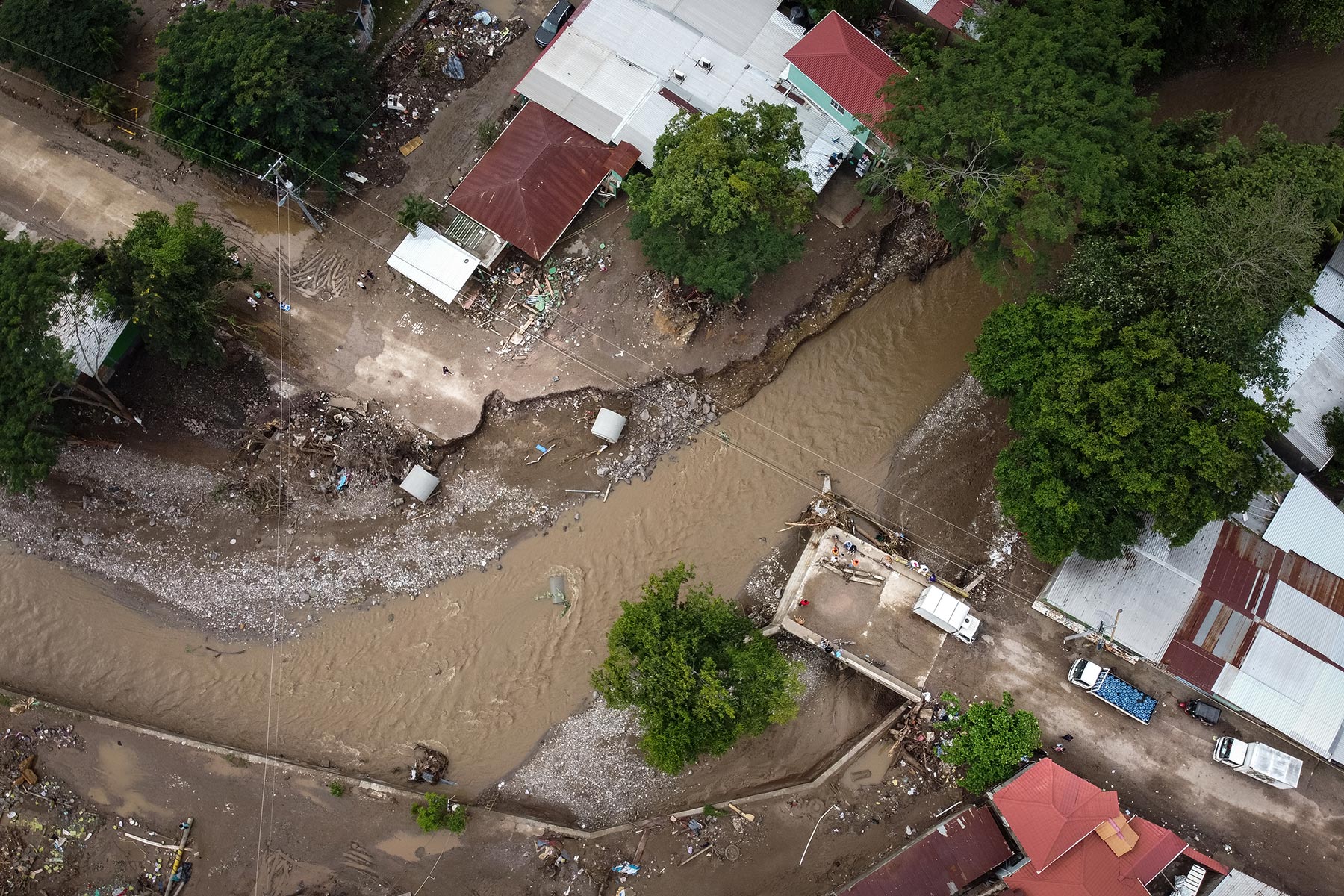 The main road through El Calan was destroyed when flood waters from hurricane Eta and Iota washed away the bridge over the waterway called Quebrada El Calan.

Climate change has brought an increase in the intensity and frequency of extreme weather events: droughts and wildfires on one hand; storms, hurricanes and floods on the other. Honduras took the full force of two hurricanes within two weeks, causing immense damage and suffering. The LWF is supporting urgent humanitarian efforts, through the Lutheran Church in Honduras. 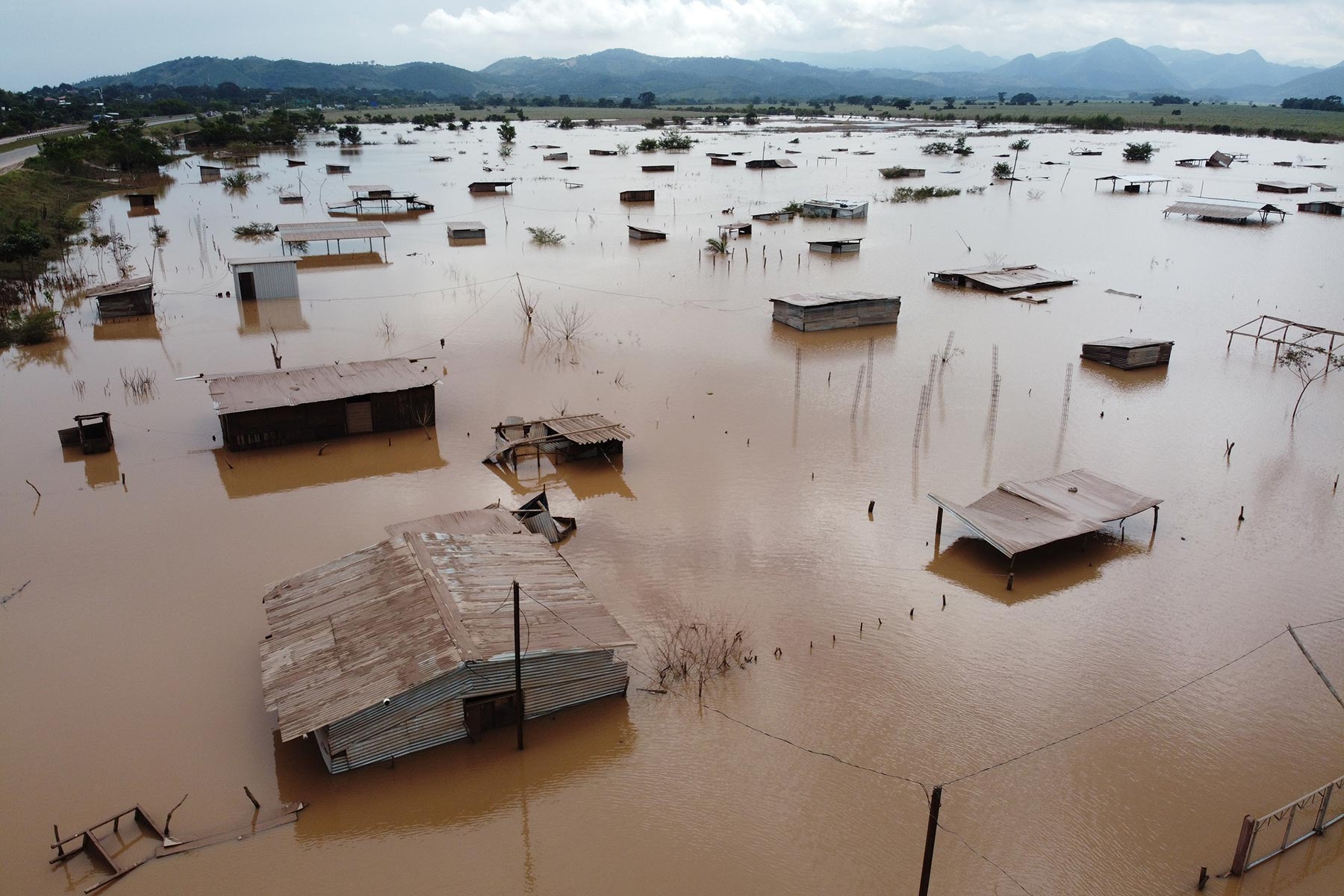 Flooded housing at Tres Reyes. Between San Pedro Sula and Tegucigalpa at Tres Reyes, Pimienta was flooded during hurricane Iota, the water came at 2am, a lot of people were prepared, but flash flooding caught many by surprise and they lost all their belongings.

Most of the damage caused by the hurricanes wasn’t from the 150 km/h winds but from the immense downpours of rain that lasted for days. Millions of tons of water came down, causing floods and landslides that destroyed housing and infrastructure such as roads, water supplies, sanitation. And perhaps most worrying of all in a country with many subsistence farmers, there is a huge loss of crops that will cause hunger and malnutrition over the coming months. 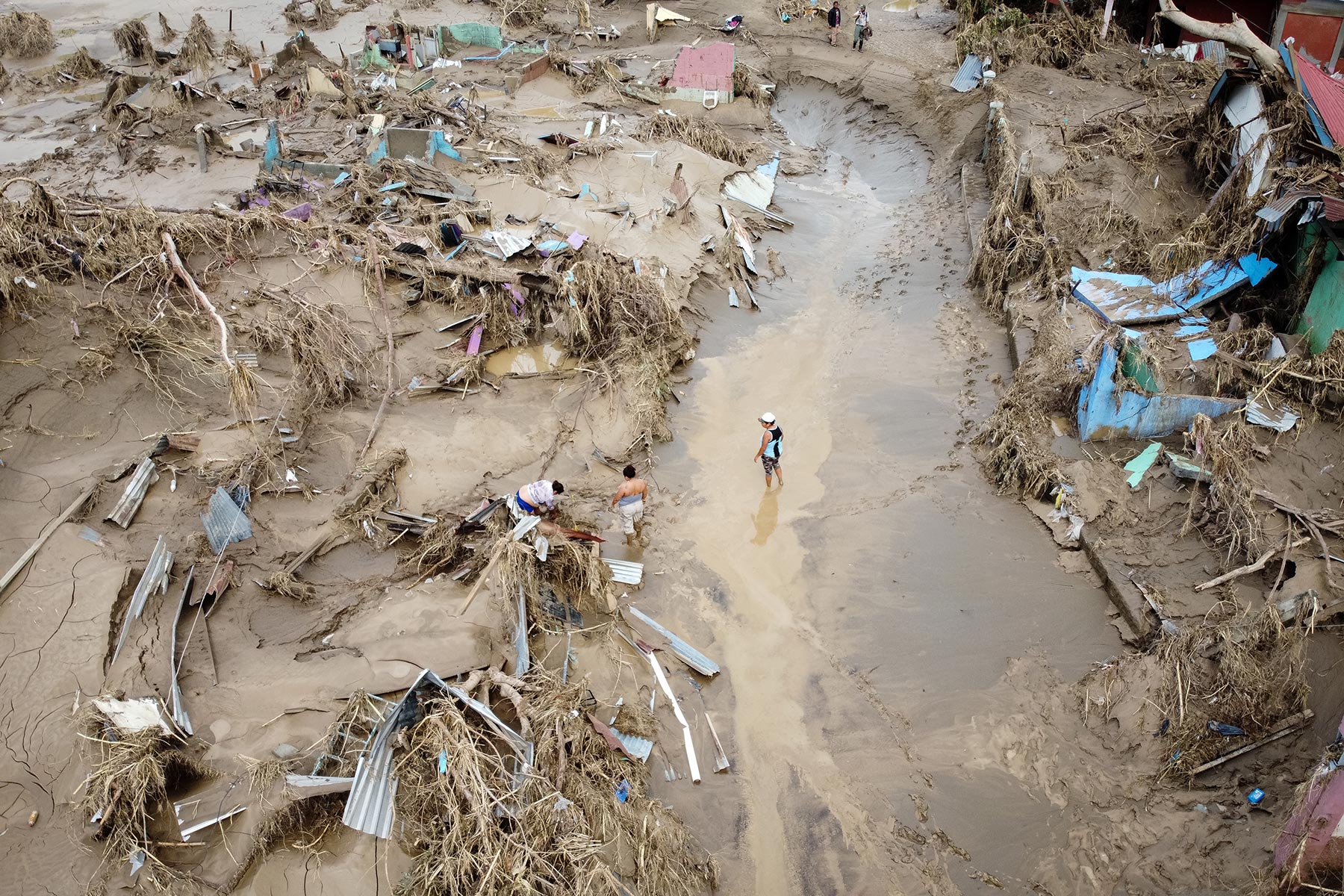 Chamelecón, San Pedro Sula, views of the destruction to housing and infrastructure after hurricanes Eta and Iota.

We waded through mud all day, and in various places there was an overwhelming stench, as the mud is hiding many drowned animals. The sewage and sanitation systems are destroyed over a large area and the drinking water is contaminated where it is functioning, in many places there are open pipelines where the ground has been washed away. Driving is precarious as people make their way around the damage. 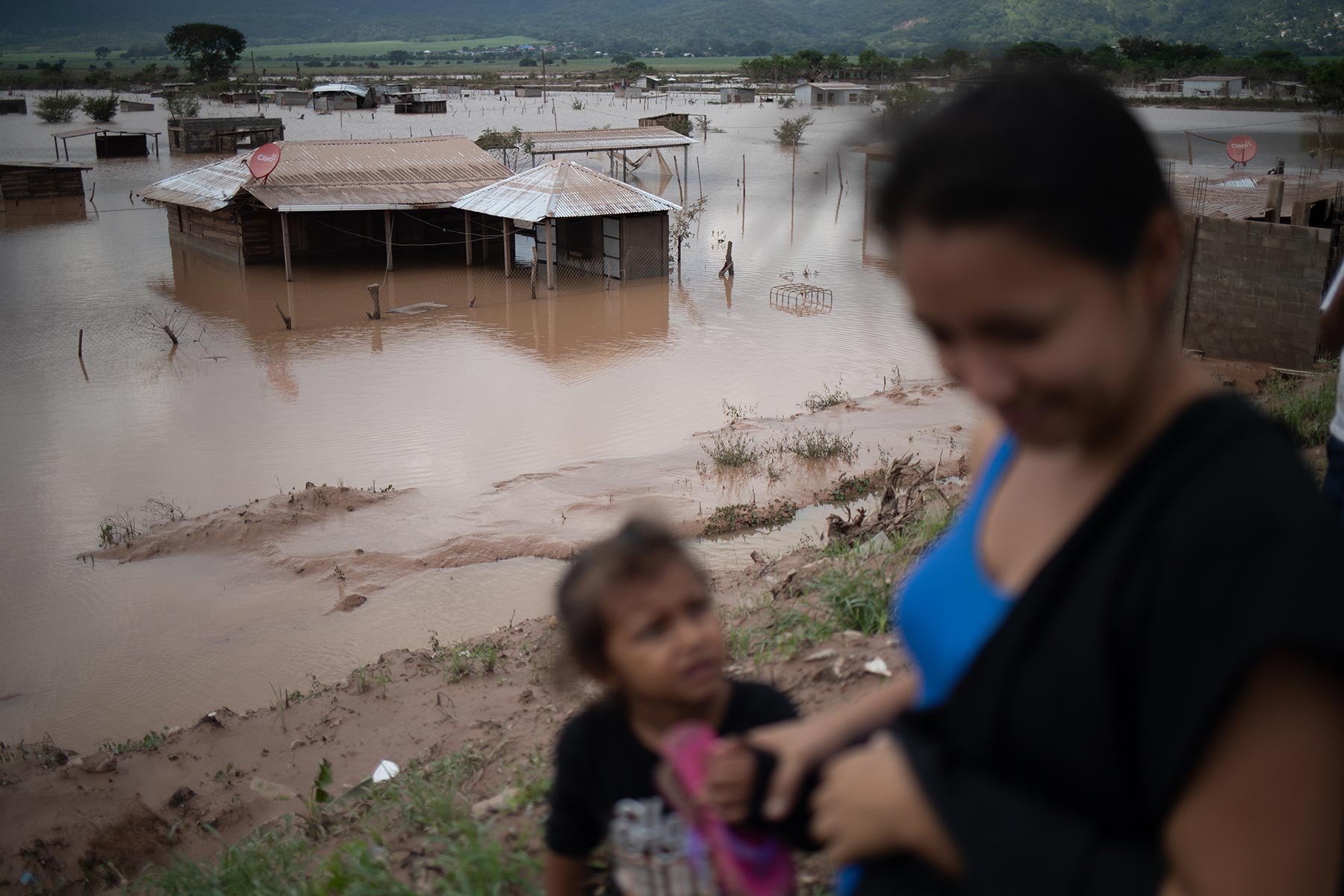 A woman and her daughter look at the damage to their house.

Pastor Julio explains why the poor are the most affected: "the most dangerous places to live, near rivers for example, are where the poorest people live, so it is the poorest who are the most affected by the flooding. The damage they have suffered is immense, and it compounds existing poverty and social problems.” For thousands of people there are no easy solutions, they’ve lost everything overnight and they have little or nothing to start rebuilding. “It will take years for people to recover" says Julio.

In many places water is brought in on trucks by private operators who charge high prices, the poorest cannot afford this and so they use muddy water for cooking, after leaving the sediment to settle. 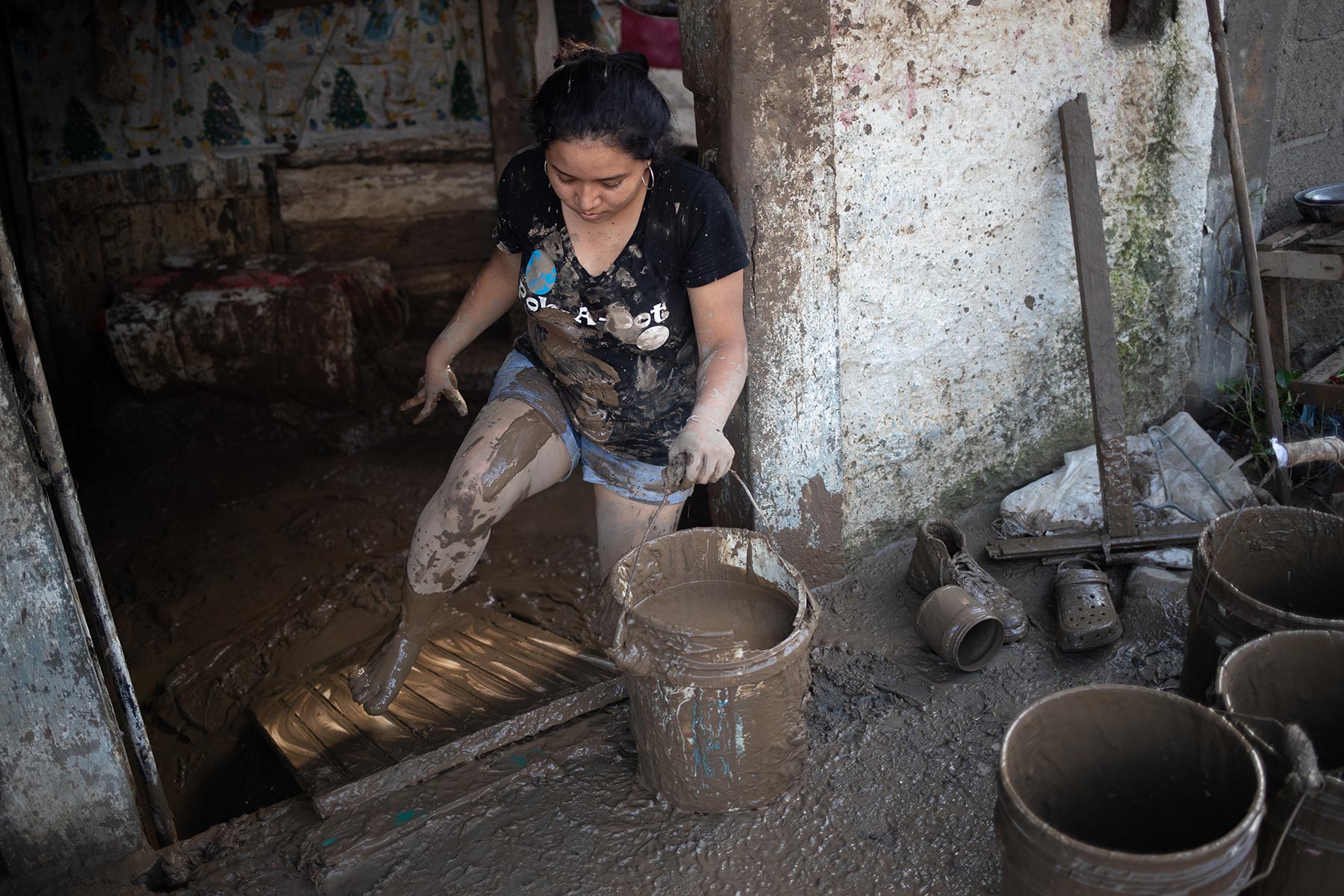 Angie Rodriguez, Colonia San Juan, Chamelecón, San Pedro Sula. Beginning to clean out her house after the double hurricanes of Eta and Iota.

As the flood waters subside, tens of thousands of residents return to their homes to see what damage has been done. For many, the destruction wipes out years or decades of work, all their accumulated belongings, all their furniture. Some have simply lost everything including their house. Starting the new year from scratch with no resources is an immense challenge.

For many, the destruction wipes out years or decades of work, all their accumulated belongings, all their furniture. 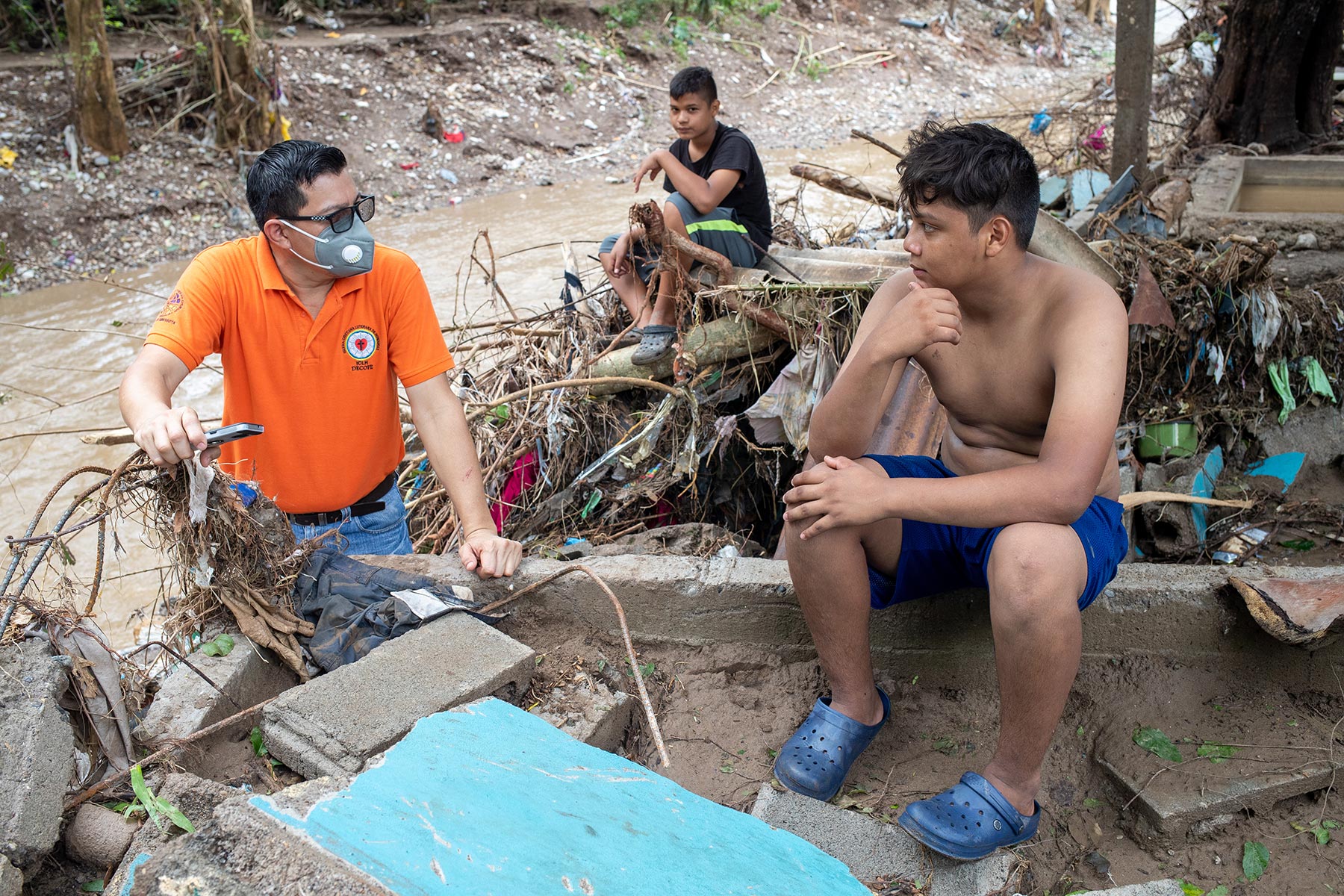 Pastor Julio Caballeros speaks with people in El Calan, Honduras, who have lost their houses in the hurricanes Eta and Iota.

As we move around, people stop to greet and talk to Pastor Julio, he’s a popular local figure, and he listens to every word of their stories of hardship and suffering with empathy and affection, and he has a special quality of helping people find meaning and hope as he listens to their stories. 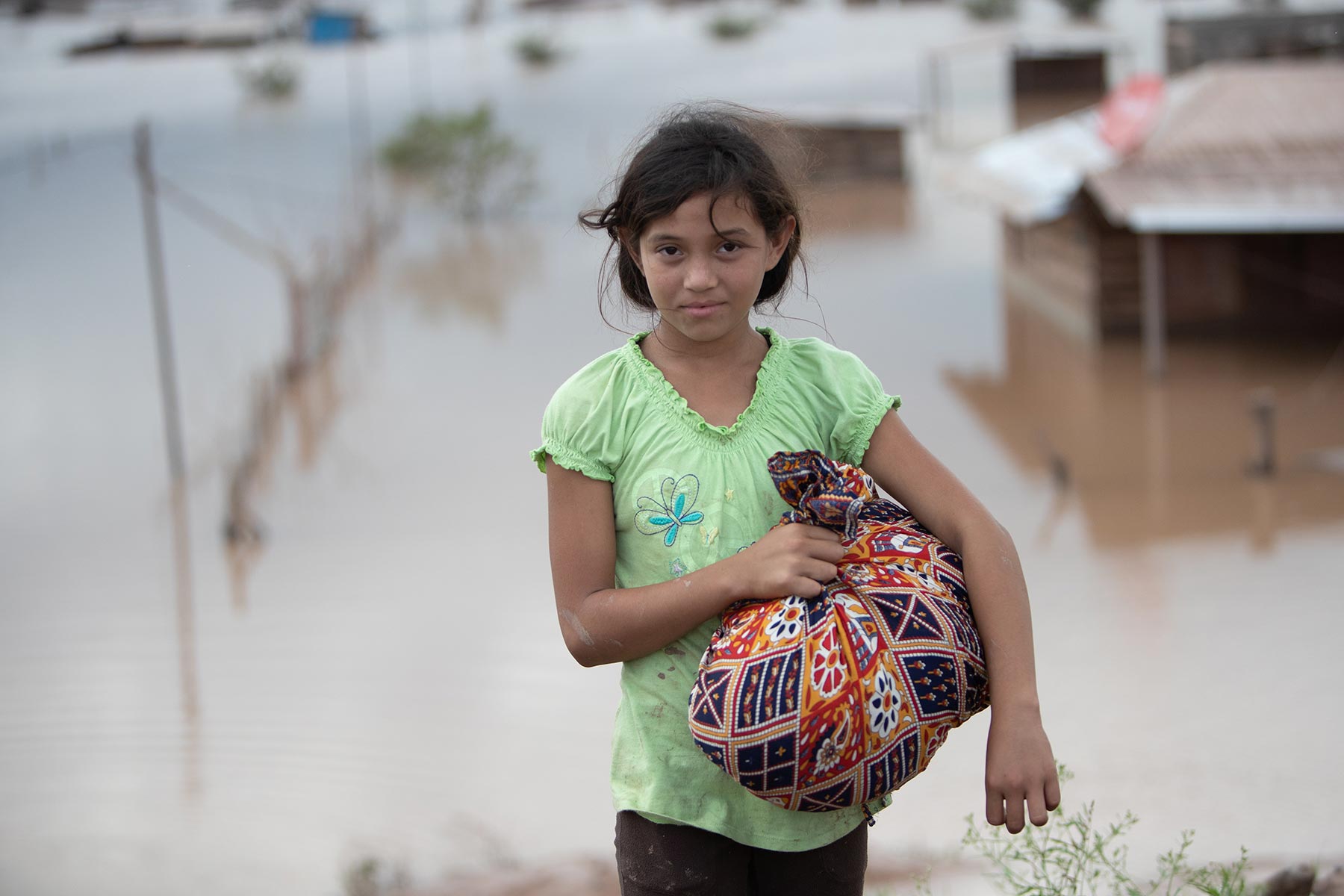 Daniela Orellana, carries a cloth with all her belongings and waits for the flood water to recede in Pimienta, Honduras.

At the end of the day, we went back to Julio’s house, in one of the most affected neighborhoods, people were waiting for him there. The Lutheran Church in Honduras has been providing shelter to people who lost their houses and belongings. While I sat recovering from a long day under the scorching sun Julio started work giving people mattresses and bedding, food and hygiene packs.