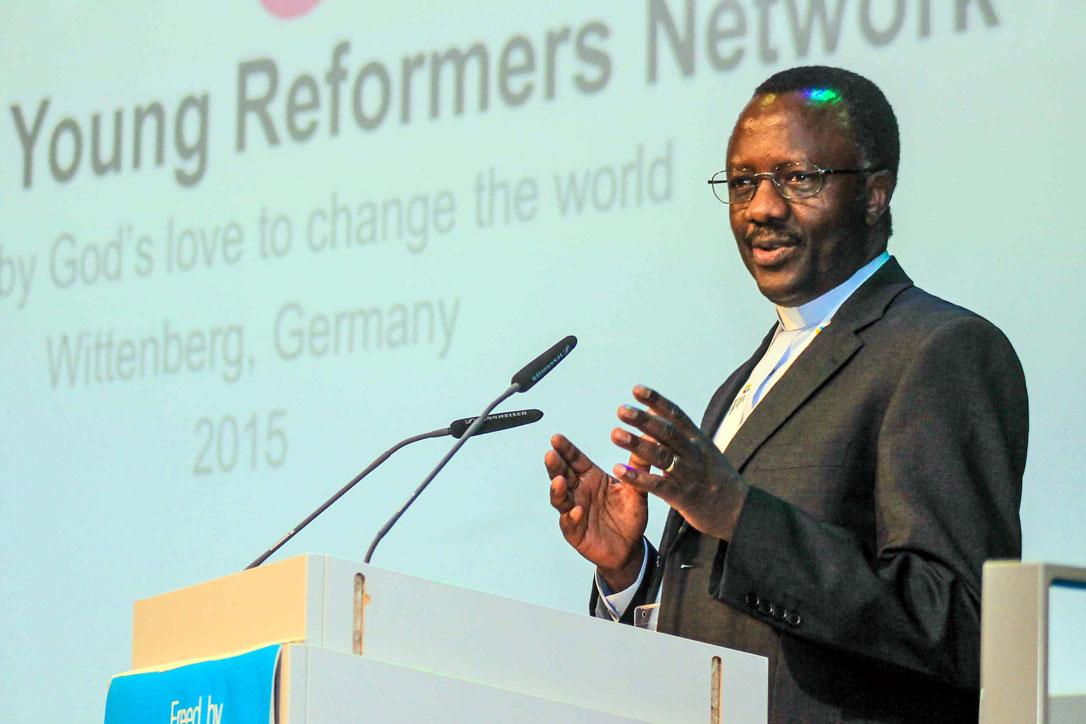 WITTENBERG, Germany/GENEVA, 27 August 2015 (LWI) - Rev. Dr Fidon Mwombeki, general secretary of the United Evangelical Mission, Germany, has called on young Lutherans to courageously and urgently take up the mission of the church today in the confidence that “God has already accomplished everything for our liberation.”

In his keynote address to delegates of the ongoing LWF Global Young Reformersworkshop in Wittenberg, Germany, Mwombeki reminded the youth of Martin Luther’s “radical thinking, daring energy and rebellious inclination” in his late 20s, which led to the 16th century reformation of the church.

He encouraged them to have a sense of urgent mission and vocation, and assume the task of pushing the elders to discover new challenges and opportunities for the church as Luther and other young reformers did some 500 years ago. “Do not neglect the responsibility to reform the church on a permanent basis, since reformation never ends,” emphasized Mwombeki, who is also incoming director of the LWF Department for Mission and Development.

“Freed by God’s love to change the world” is the theme of the 23 August to 4 September workshop, bringing together some 140 young reformers from 80 LWF member churches.

Citing examples from across the world, Mwombeki noted that proclamation of the Christian gospel today is increasingly inundated by false witnesses who spread fear and the message of damnation. Lutheranism, he emphasized, is based on the understanding of justification by faith alone: that God’s righteousness is not earned through what one does or fails to do. Rather, “it is like an open hand with which one receives what has been accomplished.”

Mwombeki elaborated on the four main tenets (solas) of Lutheranism—grace, faith, Christ and scripture—according to which the gospel should be proclaimed. Through the crucified Christ, “we as human beings are offered forgiveness of sin and justification. We have no other message,” he emphasized.

Mwombeki encouraged the young reformers to understand this unchangeable core of Lutheran identity, irrespective of the popularity of other theological interpretations. "We must stand firm and not allow anyone to deviate our convictions.”

In group discussions after his presentation on 26 August, workshop participants shared insights on the impact of rising religious fundamentalism, the relevance of God in the lives of young adults, and Christian witnessing against a background of many competing claims of religious equality. They also discussed why people are attracted to the prosperity gospel and what Lutheran churches could do to accommodate young people’s needs.

Under the day’s thematic focus “To be Lutheran means to be theological,” the young reformers participated in workshops on how to prepare liturgy and worship in a Lutheran church, which included preparation for the workshop’s closing worship service and composing a young reformers’ song. They also presented exhibitions on youth work in their respective churches.