Youth delegates observe negotiations on the road to COP26 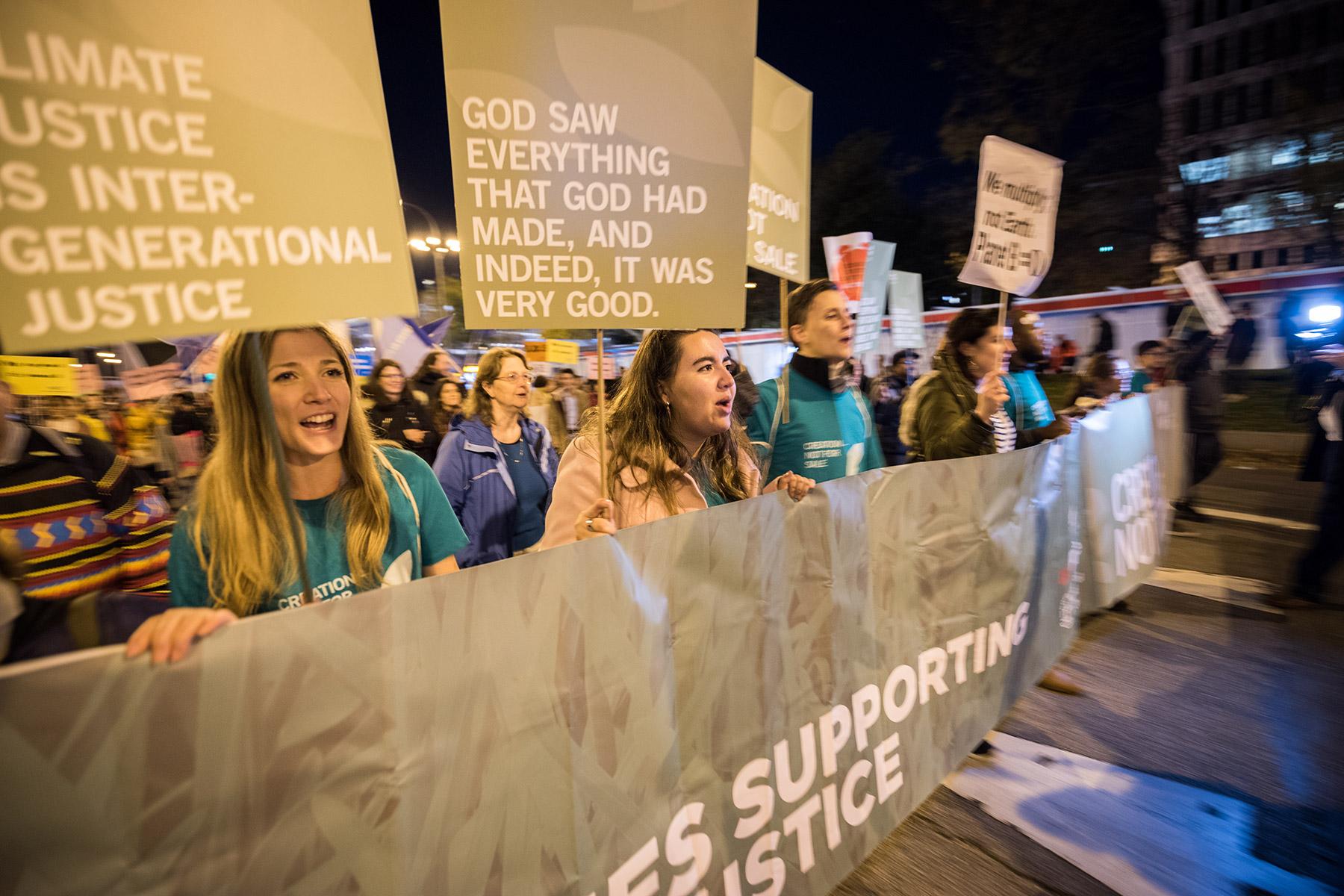 Erika Rodning from the Evangelical Lutheran Church in Canada (left) and Fernanda ZuÃ±iga from the Lutheran Church in Chile (center) during a march through the streets of central Madrid as part of a public contribution to the United Nations climate meeting COP25, urging decision-makers to act for climate justice. Photo: LWF/Albin Hillert

(LWI) – Four young delegates of the Lutheran World Federation (LWF) who had attended the 2019 UN Climate Change Conference COP25 in Madrid, Spain, had the opportunity to observe negotiations earlier this month. The LWF has observer status at these meetings, which took place online. The subsidiary bodies to the UNFCCC were in session from 31 May to 17 June.

“The last session of the subsidiary bodies to the UN Climate Change Conference (UNFCCC) was a valuable opportunity to advance work in preparation for COP26 in Glasgow in November,” said Elena Cedillo. She is the LWF’s Program Executive for Climate Justice and joined the observer group.

“These sessions have allowed me to observe and analyze how climate change negotiations take place outside of the COP,” said Zuñiga.

The delegates agreed that the online format was helpful because it enabled their participation. However, they emphasized the need to have COP as a face-to-face meeting to ensure full participation of civil society and access to the vital decision-making processes.

“The advantage of holding this conference online goes beyond controlling the spread of COVID-19 in this time of the pandemic,” said Abnasan. It contributed to reducing “waste from holding events onsite, adding to the carbon load that we aim to cut down in the first place.”

Rodning added: “Regardless of the delivery format used, it is important for observer organizations to be given the same access to COP26 as the Parties to ensure their voices are heard.”

Local to global to local

The four young adults will take insights gained during the UNFCCC session back to their home counties and churches. This will inform and shape their local advocacy for climate justice.

We want to “create a better future by advocating for intergenerational justice,” said Magwaza. But he is not sure that the meeting outcomes among the subsidiary bodies “will be critical for the COP26 agenda.”

“I see the need for a greater sense of urgency towards climate change in developed countries, such as Canada,” Rodning said. Canadians are, in many ways, shielded from the effects of climate change in comparison to many other countries around the world, she said. “An unfortunate consequence of this is that many do not realize how rapidly we are running out of time to address climate change and how desperately we need to act now.” The COVID-19 pandemic has made this even harder, as it has been “front-of-mind for many Canadians.”

Commenting on the situation in Chile, Zuñiga said that the country needed to “take a step forward in terms of climate change adaptation and mitigation.” Furthermore, considering the diversity of climates in the country, Chile should better protect its green areas.

Her church, Zuñiga said, has focused its climate efforts on mitigation. “We are active among vulnerable population groups who bear the brunt of climate change in their reduced quality of life day by day.”

“As a church and as a country, we must continue the engagement for adaptation and mitigation,” she is convinced.