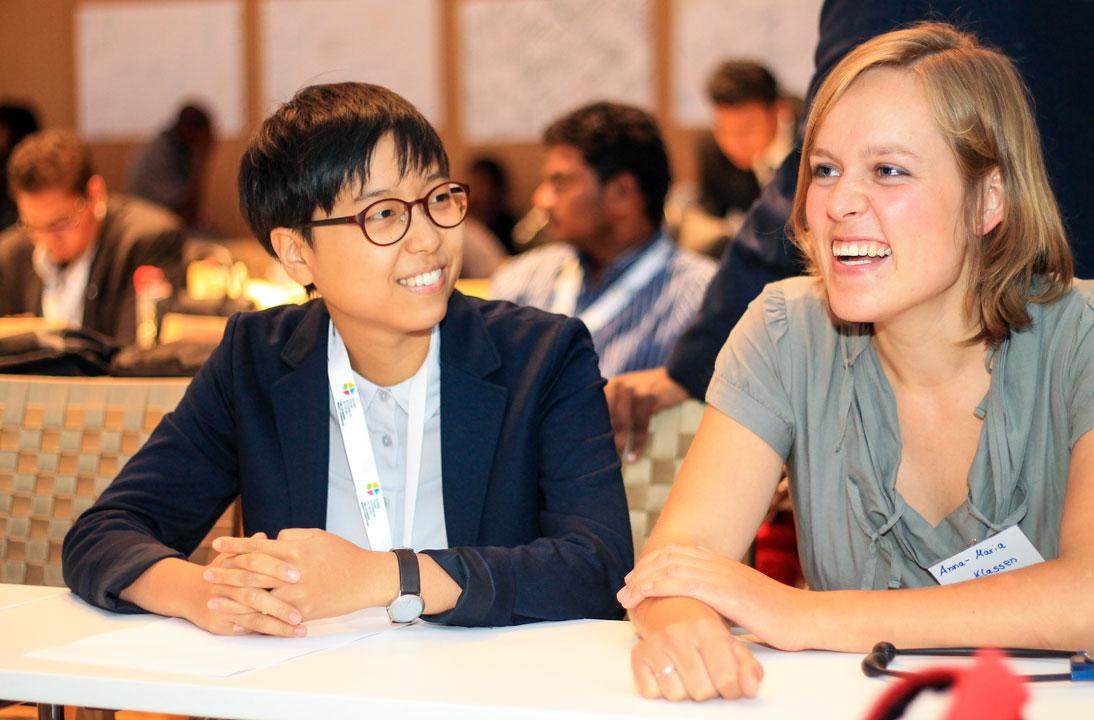 (LWI) – Young people at the Wittenberg gathering of youth from all parts of the world have revealed the Reformation projects they will undertake when they head home.

Among the projects are the use of creative arts to promote inter-generational dialogue and reconciliation in Guatemala, “football for the climate” youth clubs in Indonesia, and a virtual networking platform linking young reformers in Australia, the United States and Germany.

In all, some 76 “Living Reformation” projects were developed by young Lutherans meeting in the Reformation city of Wittenberg, Germany.

Three delegates representing the LWF Global Young Reformers’ Network group of 140 youth unveiled their “Living Reformation” project ideas at a press conference on 3 September. The initiatives conceived at the workshop will be developed until the 2017 Reformation anniversary, and will involve fellow youth in local churches.

LWF Vice-President for Asia, Eun-hae Kwon, commended the young reformers for taking up the initiatives aimed at bringing changes in their churches and communities, and for addressing challenges faced by Christians globally.

The projects are being developed under the LWF Twelfth Assembly sub-themes “Salvation not for sale,” “Creation not for sale” and “Human beings not for sale.” They are a major objective set by participants of the 24 August to 4 September workshop organized by the LWF Youth desk to prepare youth contribution to the 500th anniversary of the Reformation in 2017. They will complement ongoing work in the respective churches.

“We are a communion of churches in ongoing reformation and in our journey young generations are the integral part of our communion that gives new inspiration and creativity,” emphasized Kwon, a member of the Lutheran Church in Korea.

Explaining his initiative, “football for the climate,” Pimpinan B. Sijabat from the Indonesian Christian Church said he had opted for a popular youth sport in his country to engage young people to discuss and do something about the effects of climate change. He said the living reformation project would involve youth from the Lutheran and other churches, other religious communities and seek greater engagement across communities in activities such as tree planting, collecting litter and recycling waste.

Pablo Solórzano Gudiel, Guatemala Lutheran Church said creative arts - drawing, music and dance among others - can help reconcile Guatemalans across generations deal with the untold dark history of the 1967-1997 civil war in the Latin American country.

Sophie Louise Gerrie, Lutheran Church of Australia,wants to set up a networking platform using virtual post cards that will help participants share messages on the three Reformation anniversary sub-themes. She would invite friends across the world to join in. The modest fee to be requested for each card will go towards an LWF project to be decided.

Kwon emphasized LWF’s commitment to empower young people in all aspects of church and communion life ahead of the Reformation anniversary. “In this process, we are increasingly learning to receive and embrace the gifts young people bring into discussions, decisions and leadership throughout our communion.”

In her remarks, LWF Council member, Anna-Maria Klassen, reflected on the current discussion in Germany on refugees in Europe. She emphasized LWF’s commitment to support refugees in its work across the world. “There is no question: as Christians we have to welcome the stranger,” she added, referring to Welcoming the Stranger, the United Nations refugee agency document that the LWF helped draft and has endorsed.

Joining the young reformers via skype, LWF General Secretary Rev. Dr Martin Junge reassured them of continuing support, prayers and engagement with the respective churches to secure greater youth participation including at the 2017 Assembly in Namibia. “What I saw among you is a great love for the gospel, for the church, for the world, and for creation. You need the space to share what you learned and experienced locally and globally.”