"You cannot be Christian without working hard for church unity" 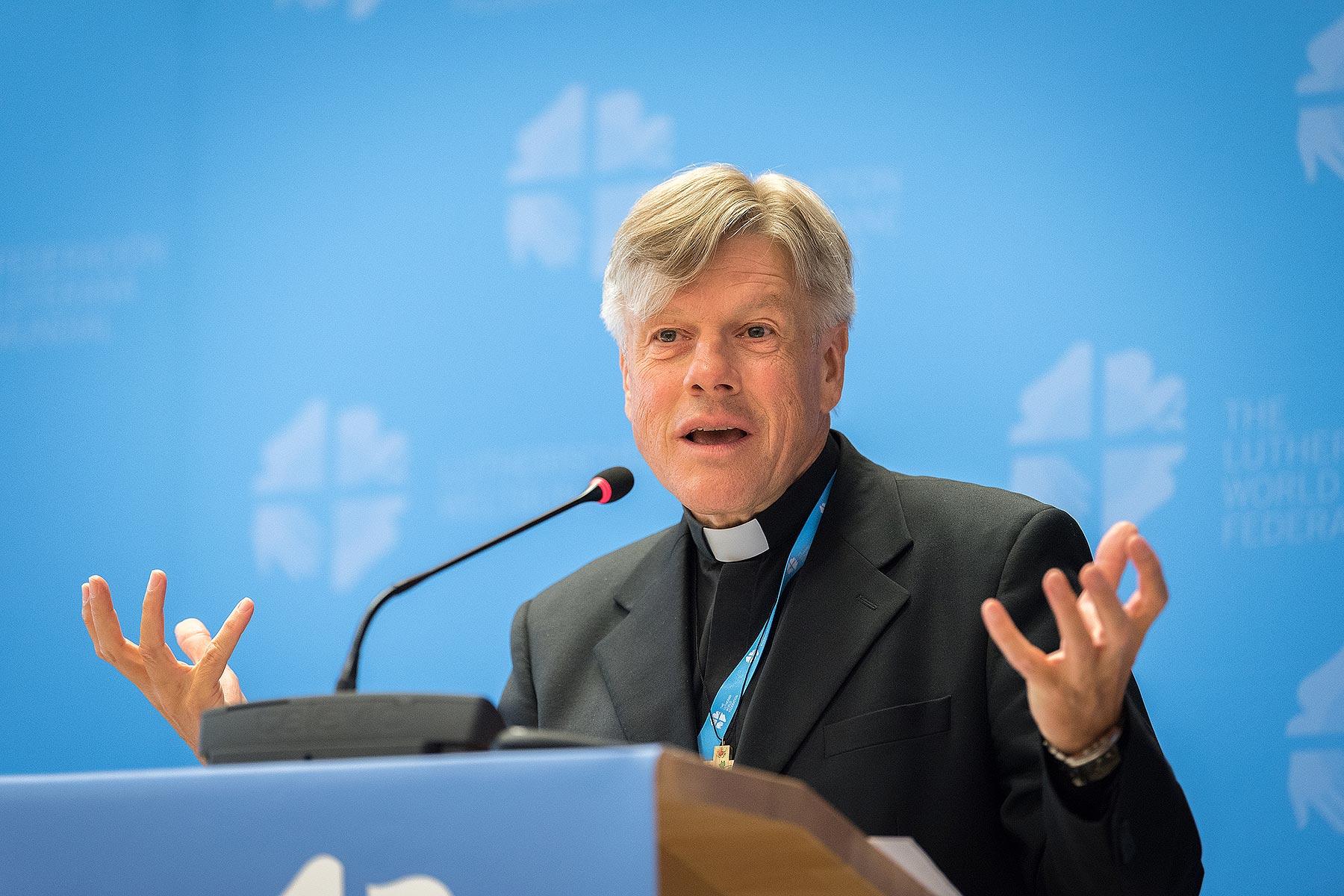 Msgr Matthias TÃ¼rk, outgoing head of the Lutheran Catholic desk at the Pontifical Council for the Promotion of Christian Unity, addresses participants at the LWF Council meeting in June 2018. Photo:Albin Hillert/LWF

(LWI) - One of the key figures in Lutheran-Catholic dialogue over the last two decades is leaving his desk at the Pontifical Council for Promoting Christian Unity (PCPCU) and returning to his native Germany.

Msgr Matthias Türk is a well-known and well-respected figure within The Lutheran World Federation (LWF), travelling frequently to the Communion Office in Geneva. Referring to his uninterrupted attendance at LWF Council meetings since 1999, his Lutheran colleagues affectionately call him “the longest serving member of the LWF Council!”

Born in 1962 and ordained to the priesthood in 1989 by Joseph Cardinal Ratzinger, the young monsignor was appointed to head the Lutheran-Catholic desk in the Vatican in January 1999. It was a pivotal moment in the history of the relationship that had been the source of wars and persecutions, excommunications and estrangement since the 16th century.

On 31 October of that year, celebrated across the Lutheran world as Reformation Day, the head of the PCPCU, Edward Cardinal Cassidy and the president of the LWF, Bishop Christian Krause, together with General Secretary Rev. Dr Ishmael Noko and the seven LWF Vice-Presidents, signed the Joint Declaration on the Doctrine of Justification (JDDJ) in Augsburg, the city at the heart of Lutheran-Catholic conflicts of the 17th century.

As Türk notes, not everyone welcomed the agreement, but he also remembers that moment as “a very intense and promising start to his job” and “a great chance to get to know the ecumenical world as a whole from the very beginning of my work.”

He recalls many positive moments in that preparatory phase, but “also irritations” caused by critics of the JDDJ. On the contrary, Türk says he already felt “it had so many implications and such positive effects on all sorts of levels of church life.”

He points as an example to Catholic parishes in Italy, where people knew little about the Lutheran church, but after news of the new document was published, parishioners became more interested and engaged. That led to the setting up of local ecumenical groups which were not always focused purely on the theological questions, he says, but “on a very practical level an interest started at that time which continues to today.”

Türk notes that this “great story of success has continued” as other ecumenical partners – Methodist, Reformed and Anglican world communions – have affirmed the agreement.

Reflecting on how this success story can be made better known among a wider audience, he says like the proclamation of the gospel itself, a broader engagement for ecumenism “depends so much on the person” at parish, diocesan and leadership level. He highlights the far reaching impact of Pope Francis “who has built on the legacy of his predecessors and really made ecumenism a very important element of his teaching and preaching at the worldwide level.”

Intensification of relationships on many levels

Citing the example of the joint commemoration of the 500th anniversary of the Reformation by the pope and LWF leaders in Lund, Sweden in 2016, Türk says that global event also had “so many effects at the grass roots, like the Catholic parish in Lund now was able to celebrate Holy Mass in the Lutheran cathedral for the first time since the Reformation.” There are many other examples, he says, where the normalization of relations between Lutherans and Catholics has led to an intensification of relationships on many levels.

Looking to the future of Lutheran-Catholic dialogue, Türk says the sacramental nature of the Church remains at the heart of the theologians’ discussions. Our understanding of the Church, the nature of the Eucharist and the issue of ecclesial ministry, he says, are the questions that “we need to deal with in order to arrive at a eucharistic sharing that is so dearly longed for.”

Asked about his advice to those who don’t see ecumenism as a central part of church ministry, the outgoing Vatican official is adamant: “You cannot be Christian without working hard for Christian unity,” because this would mean ignoring the prayer of Jesus at the Last Supper in Jerusalem, when he said, ‘Let them be one, as we are one’ (John 17:22). At a human level too, he continues, if Christians can be together, they are so much more convincing in their witness to others who are searching for ‘the way, the truth and the life.’

Common worship and discussions  together

Looking back at the most rewarding moments of the past two decades, Türk says that being together regularly in common worship and discussions “with our Lutheran friends and fellow Christians” forms “a strong communion, a feeling of belonging together [...] a sense of unity already given.” He points to this as the most rewarding part of his work, while he sees the challenge as that of convincing others about the priority of “walking together” towards the full, visible unity of the Church.

Reflecting on current heated discussions among Germany’s Catholic leaders about the possibility of eucharistic sharing,Türk notes that in Germany, the country of origin of the Reformation, these questions are more keenly felt than in other predominantly Catholic or Lutheran countries. He says Germany’s Catholic bishops are working in a “good and intense way” for Christian unity, exploring issues that were already posed in a key 1986 publication 'The Condemnations of the Reformation Era – Do They Still Divide?’ Canon law and the Ecumenical Directory of the Catholic Church state clearly that in special cases, non-Catholic Christians can receive Holy Communion at a Catholic Mass and it is essential to deepen that discussion for a better understanding now, he says.

It’s vital to make friends and walk together towards the full, visible unity of the church

As he heads back to his home diocese of Würzburg to take up a new post as personal councillor for Bishop Franz Jung, Msgr Türk has some suggestions for his successor: “To learn [...] and to pray together because prayer is a fundamental of Christian unity. Above all, he says, it’s vital “to make friends and walk together,” while intensifying both the theological dialogue and the pastoral engagement that will foster full visible unity of the Church.

Joint Ecumenical Commemoration of the Reformation