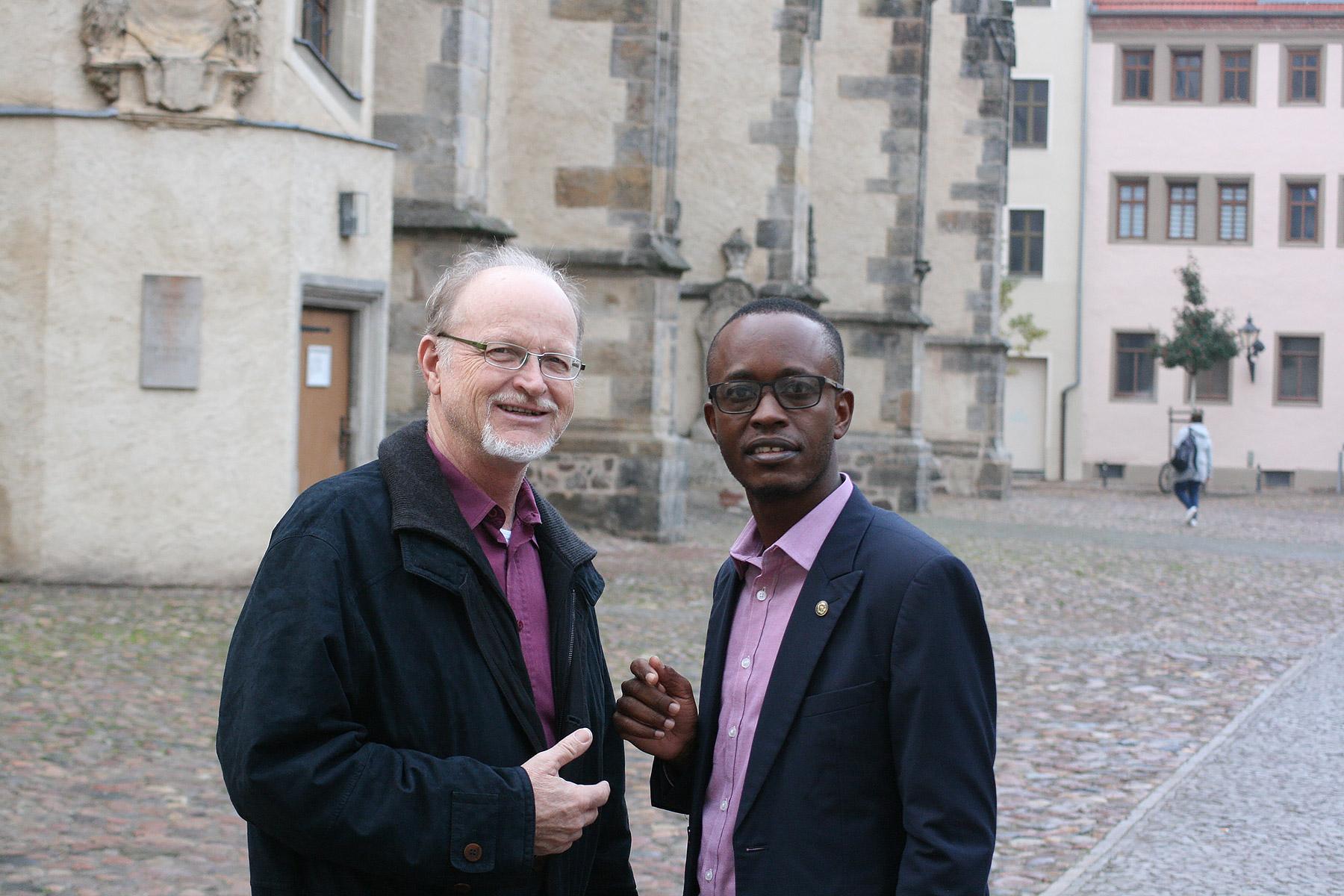 Interview with the Namibian pastors Isak Malua and Klaus-Peter Tietz

(LWI) – Isak Malua (40) and Klaus-Peter Tietz (59) are both pastors in Namibia, serving in two different Lutheran churches in the country. They met in Wittenberg, Germany,  while attending the 18th International Theological Seminar at the LWF Center Wittenberg, 3 - 17 November. Lutheran World Information spoke to them about the hopes and challenges they face in their congregations in Namibia, what the Twelfth Assembly of The Lutheran World Federation (LWF) and the Reformation commemoration in 2017 meant to them and what they take back home from the seminar which focused on “Learning Spirituality with Luther”.

When Namibia gained independence in 1990, which was a historical milestone not only for the Namibians themselves, you were 12 and 31 years old respectively. Please tell us something about your backgrounds.

Isak Malua: I grew up in a pastor’s household in the far North of Namibia. There was a military camp not far away from our home and South African soldiers were a common sight. I also noticed that my father received visitors who only came after dark and they always had serious talks. As a child, I didn’t think much of it. It was part of our daily life. During the transition to independence when many Namibians who had lived in exile returned, my late father was sent to Angola as a missionary. I was 11 years old then. Angola also was a war-torn country and in the middle of my high school I was conscripted to the army. That was the point that I decided to return to Namibia.

Klaus-Peter Tietz: My father was a mechanic and my mother a bookkeeper. As was common in our section of Apartheid society I went to an all-white school. It was in my teens that I started critically reflecting on the political situation we had in Namibia. My first experience of a community without racial segregation was while being a student of theology in South Africa. We as students stayed at a place called Mapumulo Theological College and within the boundaries of this compound where 80 people lived, there was no Apartheid. That experience left a deep impression on me. Nevertheless, I had to go to the army defending an unjust system once I had completed my studies. I had a placement as chaplain and lucky insofar as I never was involved in any battles.

Looking at the present: what is the situation you work in regarding your congregation, your church, your context?

Tietz: I am a pastor of the Evangelical Lutheran Church in Namibia (ELCIN-GELC). My constituency stretches along the Namibian coastline for about 700 kilometers. The size of the congregations is quite stable at around 800 members, mainly made up of German speaking Namibians. Most of my congregation members are materially well off and we are very grateful that we live in a peaceful country. Nevertheless, people feel uncertain about the future. I notice that the young generation in Namibia is getting impatient and angry and that the political language is growing more aggressive. That needs to be addressed and acted upon very speedily to maintain peace and stability in our country.

Malua: I agree with this observation. I work as a chaplain of The Evangelical Lutheran Church in Namibia (ELCIN) at the institutions for tertiary education in Namibia’s capital city Windhoek. So, I am in touch with a lot of young people striving for a good education and a successful career. Some students receive government study loans from the Namibia Student Financial Assistance Fund, others have bursaries from NGO’s and state-owned enterprises, while some others are supported by their families. Some students get accommodation in the universities’ hostels, some rent places to stay nearby or far from the universities, while some are accommodated by their relatives and friends. Poverty is an issue and the feeling of uncertainty about the future, particularly now that Namibia is experiencing a phase of economic recession. Another issue troubling many young people are relationship questions. Traditionally that is not really something you talk about. However, I find that students these days tend to be more open about this and request a lot of counselling, guidance and mentorship. It is a special sign of trust when they come to me and address me as “father.”

Last year, 2017, Namibia hosted the Twelfth Assembly of the LWF. In what ways were you involved and what did this mean for the churches?

Malua: I was a member of the mass choir comprised of about 400 people singing at the Reformation celebration in the Sam Nujoma stadium as well as the Assembly choir. While the Assembly choir was more international, it was the mass choir that brought us together as Namibian Lutherans. We got to know one another, we worked together, we celebrated together. What an amazing experience!

I am taking back home our global fellowship of faith. We Namibians are a small population in a large country. But we need not think that we are alone on this road.

Tietz: Preparing for the Assembly, a lot of work was done by the United Church Council – Namibia Evangelical Lutheran Churches (UCC-NELC). There were numerous committees put in place, each with representatives of all three Lutheran churches in Namibia. Through facing this big task and working together friendships have developed among these persons. I really hope that they have grown strong enough to carry us through on the way ahead.

Having come all the way to Wittenberg in Germany to attend a theological seminar together with Lutherans from across the globe – what are you taking back home after being here for two weeks?

Malua: My stay in Wittenberg was based on the concept of “learning, relearning, and unlearning.” I take home more insight about the history of the Reformation, and the history and spirituality of Martin Luther. Visiting places where Martin Luther and other reformers were physically, was a lifetime experience for me. Sharing experiences with colleagues from other contexts, has helped me to assess, affirm and reaffirm what I do in my church and in my congregation, having thus gained more understanding, especially on the subjects pertaining Lutheran doctrine and its practical theology.

Sharing experiences with colleagues from other contexts, has helped me to assess, affirm and reaffirm what I do in my church and in my congregation, having thus gained more understanding, especially on the subjects pertaining Lutheran doctrine and its practical theology.

Tietz: Indeed, I am taking back home our global fellowship of faith. We Namibians are a small population in a large country. But we need not think that we are alone on this road. Secondly, I am grateful for reading Luther’s writings again and seeing his words resonate with pastors from all continents. Thirdly, the time of theological deliberation gave back to us a sense for our core task.