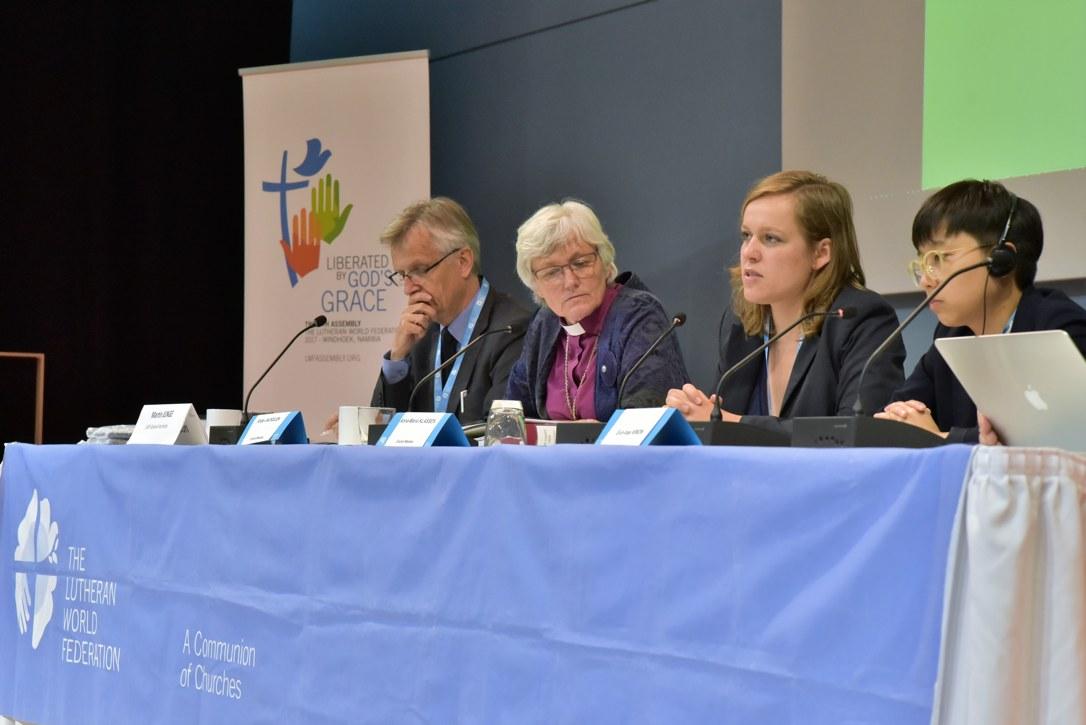 WITTENBERG, Germany/GENEVA 22 June 2016 – Leaders of The Lutheran World Federation (LWF) said this year’s governing body meeting in  Wittenberg offered delegates opportunities to connect to the historic roots of their churches, garner momentum for the 500th Reformation anniversary and learn about their shared witness in the world today.

Eun-hae Kwon, LWF Vice-President for Asia spoke about Sunday worship in the Bitterfeld congregation, in Saxony-Anhalt. “I experienced the warm hospitality of the congregation. I observed the multicultural landscape of Europe expressed in the church as it reaches out with love to welcome refugees and other displaced people into the community.” Refugees from Somalia and Syria, now living in Bitterfeld, attended the service. The delegate from the Lutheran Church in Korea said such experiences “give us hope and motivate others to join in this expression of love.”

Klassen, chairperson of the Council’s Standing Committee for Communications, said the common prayers and devotions that are part of the daily business of the Council meeting “strengthened me a lot and are important for expressing Lutherans’ fundamental roots.”

Referring to discussions and actions on the global refugee crisis, Klassen said many people in Germany wondered why the LWF and its churches reach out to displaced people who are not Christians. “For me, it has become more important to emphasize that we do not help others because they are Christians but because we are Christians,” added Klassen, a member of the Evangelical Lutheran Church of Hanover.

Jackelén said discussion about the refugee issue in Europe had become more polarized. In Sweden, the government has introduced new regulations limiting the number of asylum seekers who can be granted residency and made it difficult for families to stay together. “We as churches are strongly protesting that,” she said. Referring to an LWF Council statement, she emphasized that it was important for the church to be part of the public space  where such issues were discussed.

Junge said the LWF’s support to refugees was part of the organization’s foundational principles. Affirming the Council resolution, Standing with Refugees , he added, “People lose many things when they flee but never their human rights. LWF churches have a great responsibility to stand with refugees through proclamation, diakonia and advocacy.”

The Council’s resolutions included a call on LWF member churches to support the Christian presence in the Middle East, where the Evangelical Lutheran Church in Jordan and the Holy Land witnesses in difficult circumstances. Churches were asked to take part in implementing the sustainable development goals adopted by the United Nations last year. The Church of Sweden archbishop said public statements and other actions of the Council were significant “not only for the church but also for society.”

The LWF general secretary said this year’s Council meeting had enabled church delegates coming to Wittenberg for the first time to experience the way in which “we are rooted in the Reformation history.” The different nationalities and languages represented in the Council, and the participation of ecumenical guests in the Wittenberg Pilgrimage, reiterated the global and ecumenical nature of the movement to reform the church, which Luther started in the city nearly 500 years ago.

Junge underlined the “great energy” in this year’s meeting, in anticipation of October’s joint ecumenical commemoration with the Catholic Church in Lund, Sweden, and the Assembly and Reformation anniversary next year.

The Council also included difficult issues, such as the action expressing deep sadness over the decision by the Evangelical Lutheran Church of Latvia to restrict ordination to men. “We addressed it and did so in a respectful way. The Council reiterated positions of five consecutive Assemblies and affirmed therefore women’s ordination as a goal in the LWF. We encouraged member churches to continue journeying towards that goal and to do so jointly,” Junge said.