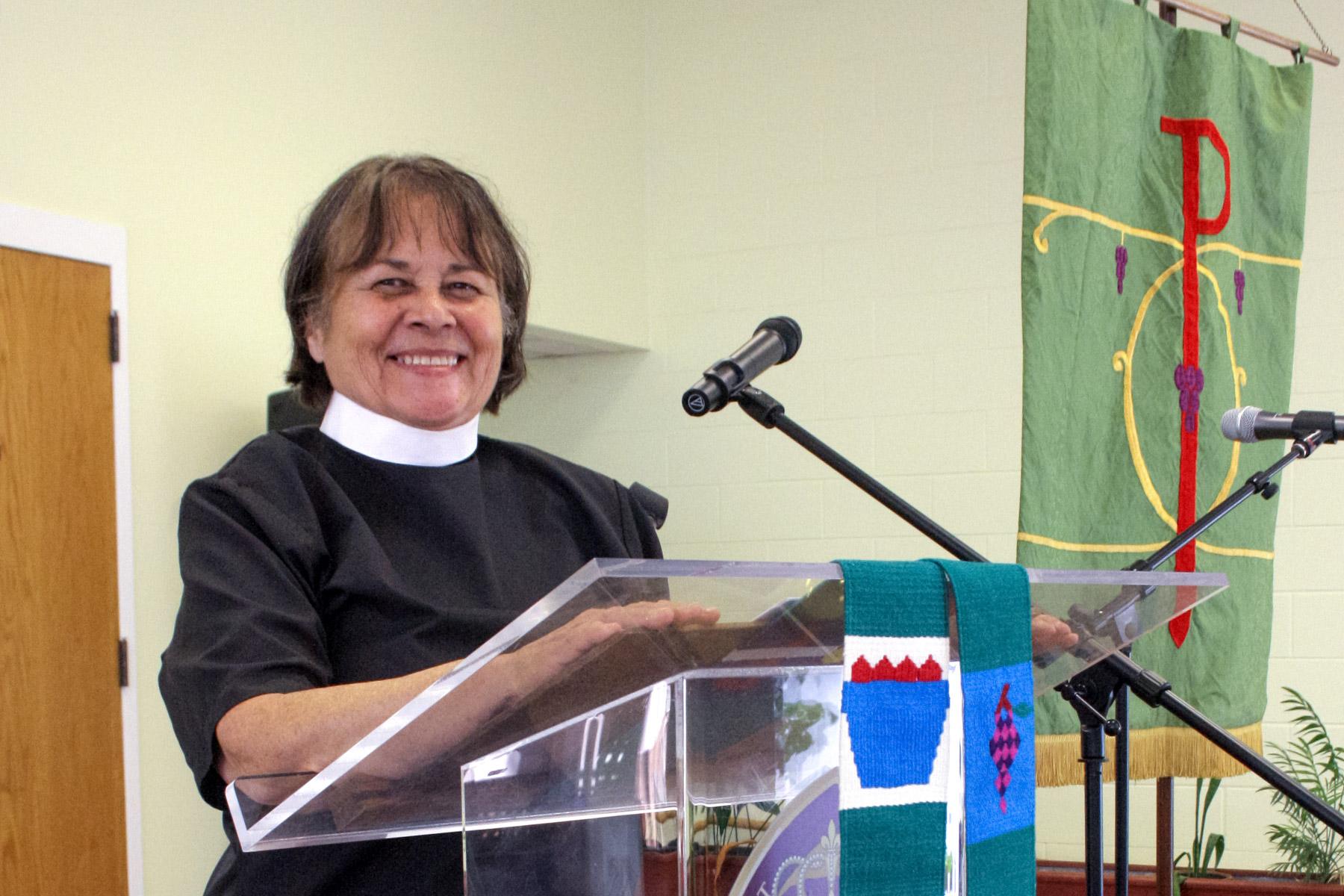 Rev. Joann Conroy, an Oglala Sioux woman, explains how the church might learn to care for creation from Indigenous people around the world. Photo: ELCA

Voices from the Communion: Native American, Rev. Joann Conroy says “those who live Creation” can teach the church

(LWI) - Her grandmother gave her a Sioux name, Winyan Wakan, in Sioux language meaning Holy Woman. Evangelical Lutheran Church in America (ELCA) Rev. Joann Conroy, an Oglala Sioux woman was 13 years old when she received her Sioux name, years before she accepted the call to enter the ministry.

Born and raised on the Pine Ridge Indian Reservation in South Dakota, USA during a time when families were still living off of the land, the Lutheran minister and leader recalls her Episcopal upbringing, her Native American traditions and how the church might learn sustainable environmental practices from her people. Conroy reflects on how her trust in Jesus was not destroyed in cruel boarding schools run by some Christians organizations and designed to erase the culture of Indigenous children.

Conroy is president of the ELCA American Indian and Alaska Native Lutheran Association and is a chaplain at Good Samaritan Society Sanford Health in Minnesota.

You have said that your people are spirit-led people, how do you practice that personally?

My family was very active in the Episcopal church. The South Dakota Episcopal Diocese has a long history with our Native people and has always honored who we are. I was taught by example our Sioux spirituality. During the 50s and 60s when it was against the US law for Native people to practice their cultural spirituality, many did so privately in their homes. Our church services were held in the Sioux language and in English. Everything I learned about worship was in the world of both of these languages. Many Native people grew up like this in the Christian church with both languages.

How does that affect how you do ministry?

When I was ordained over 20 years ago, I brought our language, our songs, our stories, our dance, our drum into the Lutheran church. I brought the rituals we do when we pray like smudging or burning sweet grass, sage and cedar during service. I reminded people of the sacredness of water. In Christian churches water is used but is never talked about as being sacred until Baptism. I have always been able to incorporate who I am as a Sioux woman with all of my Christian and Tribal beliefs into my ministry. But not all of our people are able to do that. There are many Native people raised in the Christian church who never incorporate Native spiritual practices, and there are those who only use Native spiritual practices, and then there are people like me, who do both. All these practices are gifts from God as a way to know God.

You grew up living from the land, hunting, fishing, being in nature, do you continue this way of life?

Living in St. Paul, Minnesota makes it really hard to do. I seldom get out of the cities. I take a month off in the summer to go back to South Dakota in the wilderness and in the forest. It is important for me to go completely off the grid for one month. It keeps me whole as a person. I have to be connected to where I came from.

How do you encourage others to be connected to where they come from?

I ask them their story. Normally when you ask a Native person where they came from, we will start with “Well, my grandfather was....” because that’s where we came from. Once you hear a person’s story, they take themselves back to the land in the telling. Sometimes we have to allow our spirits to remember that place.

Native people don’t ever lose the sacredness of the land or the environment. It is a part of who we are because we live it and we breathe it, it is a part of our daily being.

The Lutheran World Federation is committed to climate justice and creation care, how do you see churches engage with that?

I see the church really trying to address these issues by putting them on the table and at the forefront of everybody’s mind. Because of the diverse cultures and the structure of the LWF there is great opportunity to learn about the care of creation. Indigenous doesn’t just apply to Native people, but to those who are Indigenous to their countries and their climates, who know about living with and caring for the earth, so when the church is looking for advocacy for those things, it is important for the churches to hear those voices and not just create policy of “good will” without hearing those voices. It does no good to have policy coming from the churches if the Indigenous voices from around the world are not being heard in the making of those policies.

U.S. President Joe Biden nominated Congresswoman Deb Haaland, a Native American woman of the Laguna Pueblo Nation to serve as his Interior Secretary, leading the agency in governing public land. What does this appointment mean for the Native American community?

The Tribal governments and Tribal nations are really excited about her appointment for many reasons, it is historical.

As she comes into this position, and works to continue implementing protections for creation, globally her work will be embraced because other Indigenous people will not have to spend a lot of time trying to explain why creation is important. Voices of the Native people will be heard; her appointment brings hope.

You experienced the horrific boarding schools run by Christians growing up in South Dakota, USA. How do you reconcile this with your Christian faith?

I can because I know it wasn’t a God thing, because what happened to us was at the hands of human beings using the name of Christ. I can reconcile it because I know it was purely a human behavior. A couple of weeks ago, I tried to watch a Candian TV show about [Indian Residential Boarding school] history with my son, and I couldn’t watch it. Those things that happened [in the boarding schools] didn’t come from God. It may be why many of our Native people do not trust Christianity, even today, and they have good reason not to, but they can trust Jesus. This is why I start with Genesis 1 [recording below] when talking to other Native people, because what we [Native people] know for sure is that we were created by God.

Unfortunately, these contradictions still exist around the world. It is because of that boarding school experience that when something unjust happens, I put myself out in front. I can’t protect the people behind me but I can lift up their voices.

What does it mean for your church, your work, your people to be a part of the LWF communion of churches?