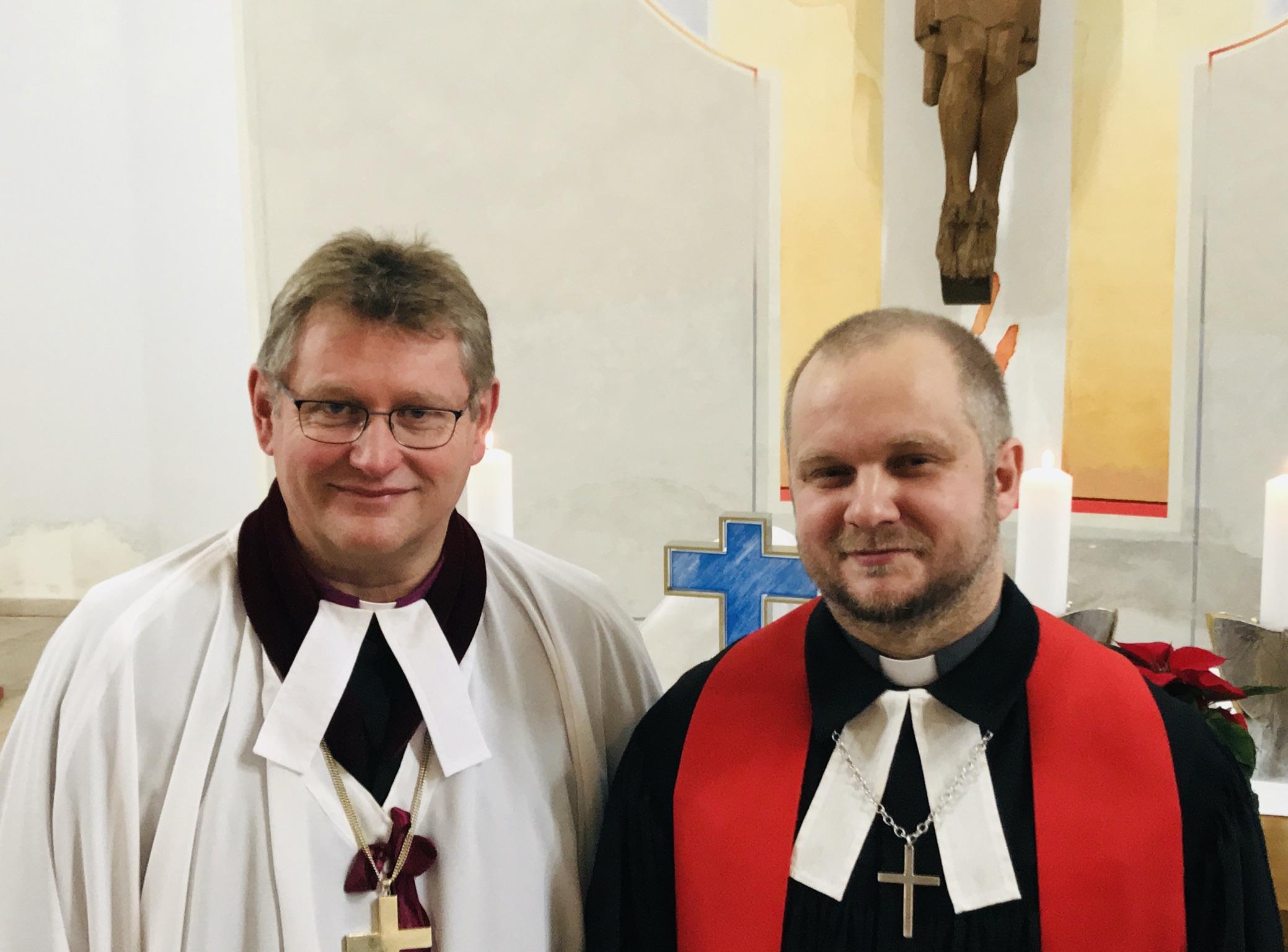 Bishop Jerzy Samiec, Evangelical Church of the Augsburg Confession in Poland, and Bishop Pavlo Shvarts, German Evangelical Lutheran Church in Ukraine. Bishop Samiec has called on the parishes of his church to open their doors to welcome refugees from Ukraine. Photo: Dariusz Bruncz

(LWI) - Lutherans in Ukraine are standing firm against the invasion of Russia and providing support for people in the country. They call on churches in Europe to shelter refugees from Ukraine, advocate against the war, and offer support for basic and medical necessities. Polish journalist and editor Dariusz Bruncz spoke to Bishop Pavlo Shvarts of the German Evangelical-Lutheran Church in Ukraine.

Bishop, where are you now?

I am staying not far from Kharkiv. I came back from the city after I secured my wife and children at my relatives’ place. I was not able to return to Kharkiv, because the city is under attack of Russian forces.

What is the situation of your Church?

Our congregations are in a different situation. In Kharkiv, where I am also a pastor of the local congregation, some people rescued themselves out of the city, but most of them stayed in the active war zone. Russian troops have flanked us from all sides and their tanks are going to Berdjansk. At some places it is still relatively quiet, but what concerns us most is the fact, that most of our congregations are in the eastern and southern part of the country, where heavy combat takes place. Most of our flock stayed in their cities and villages. Some cannot flee, because they have to care for members of their families, who are not able to take up a long journey. What we can do is to maintain our contacts, pray and coordinate humanitarian help.

Do you have any information about victims from your Church or destroyed Church property?

Luckily not yet but the day before yesterday, which was the first day of the invasion, there was a panic-outbreak here but now the situation has stabilized. In the meantime, most calmed down, if you can even speak of calmness in such a situation at all.

Kharkiv is situated not far from the Russian border and most people living there are Russian speaking. What is the atmosphere there now?

Well, there are some different opinions on the matter but this time Russia – to say it mildly – does not have as many friends here as before. Of course, many people have or had many contacts with each other, but it is difficult to speak about “friendship”, which is articulated with a trajectory of ballistic weapons, bombardments, and heavy gunfire. This torrent of abusive aggression made people change their perspective and at the same time it has strengthened solidarity in the Ukrainian society in its fight for their country.

What can Lutheran Churches in Europe do? How can we help?

Give shelter to refugees from war zones, deliver pastoral care, pray and speak out about the sin of the war and not about imaginary peace as if the responsibility for this invasion was on both sides. We need financial support for food, medical and hygiene products and for equipping emergency accommodation.

Did you receive any signals from Russian Lutherans?

Almost none, only private ones. These were mostly sympathy declarations and assurance that they pray for us. Russian Lutherans cannot say what they think publicly, otherwise they would be threatened with prosecution. Probably most of these being silent are under the influence of the regime’s propaganda.

What are you going to do in the next hours and days?

The usual things. I am going to talk with my people and try to comfort them, pray with them and if needed, to help with the transport of food for people in Kharkiv. There are plenty of home visits I must make. With most members of my congregation, we are in touch through the network of our elders. I will do my best to stay in contact with other congregations in the country and with our sister Churches abroad. To say it shortly: normal stuff. I simply want to help as much as I can.

Text and translation by Dariusz Bruncz. He is a Polish Lutheran journalist, academic teacher, and editor of the website ekumenizm.pl. First published in Polish.