Ukraine: “I don’t want to sit around until the war is over” 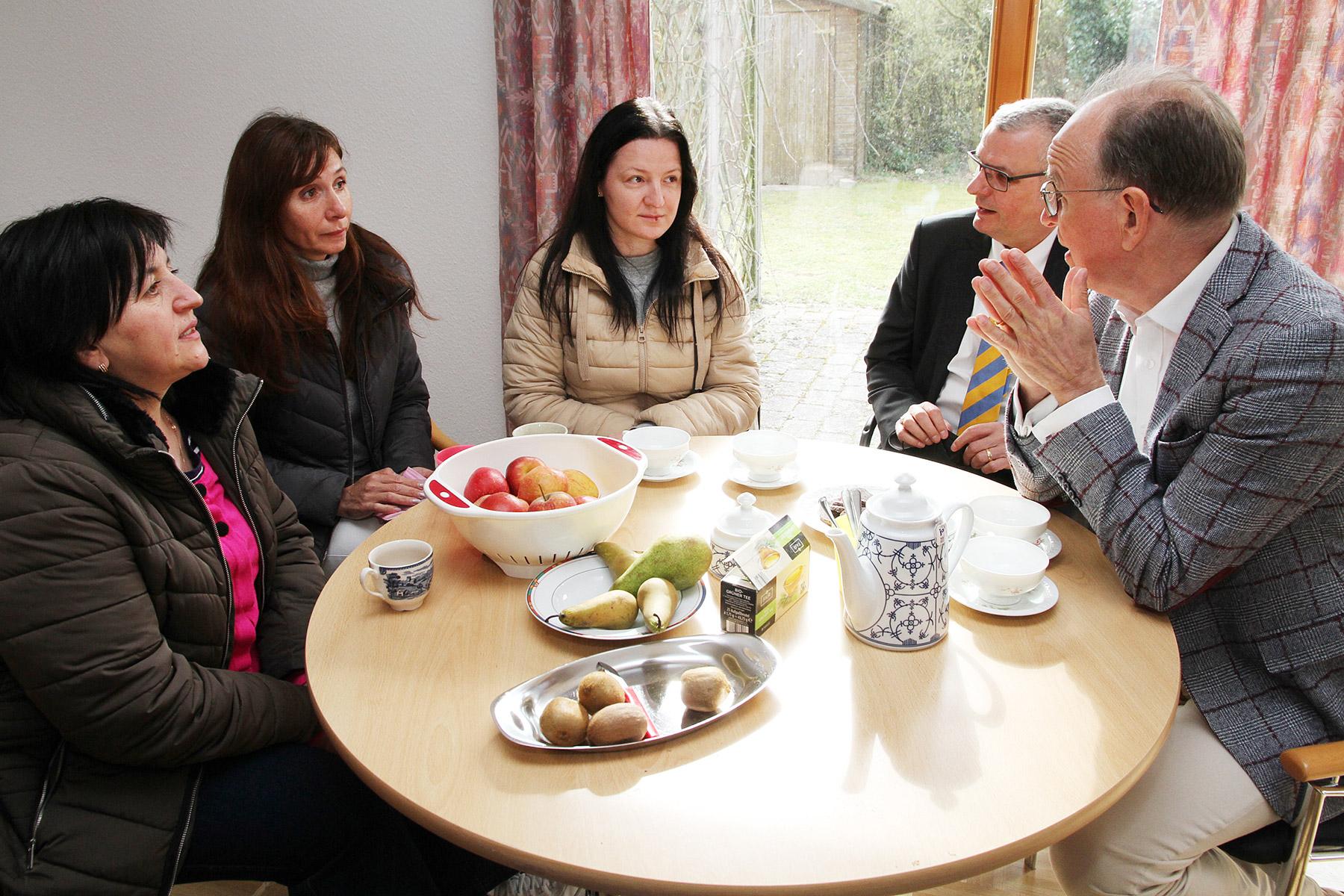 (LWI) – The Evangelical Lutheran Church of Hanover, Germany, has opened a “blue-and-yellow meeting place” in a quiet residential neighborhood near Hanover on 17 March.

“People from Ukraine come to us with terrible experiences,” said Leading Bishop Ralf Meister during a visit to the “blue-and-yellow meeting place” of the diaconia in Neustadt am Rübenberge. The meeting place bundles a variety of offers of help for refugees. Meister emphasized that the people receive concrete support and “need to feel accepted in our society with their needs and burdens.”

The church provides 2.5 million Euro for refugees from Ukraine. The funds are dedicated to church and diaconal projects in the current year.

Regaining a degree of normality

On the terrace of the parsonage that accommodates the meeting place, Svitlana Kryzhanivska (55) follows a conversation closely to interpret what is said. Next to her at the garden table sits a couple who fled Kherson before the Russian army captured the city.

Kryzhanivska also left her western Ukrainian hometown of Ivano-Frankivsk. On the first day of the war, bombs fell on a nearby military airport. As recently as February, Kryzhanivska had not dreamt that she would be needed as a mediator, thanks to the German language skills obtained in primary school. Nevertheless, she has come to the “blue-and-yellow meeting place” to translate between Russian, Ukrainian, and German.

The drop-in center in Neustadt is a meeting place set up by the diaconia in the Hanover region together with the church districts. The aim is to enable refugees to regain some normality, says Janet Breier, the social worker from the church district who heads the service.

The facilities in Neustadt include game corners, a kitchen, a washing machine, a retreat room, laptops, and a large garden. Those who wish can also benefit from the social counseling or pregnancy counseling diaconia employees offer. Ministers are also available for pastoral care. “The possibility for childcare is also important for the meetings with mothers,” Breier emphasizes. Language lessons are also planned. In addition, a large team of volunteers collects and distributes donations of clothing and other goods.

In their work, staff can build on the experience of the increased influx of refugees in 2015. “Unlike in 2015, most people want to go back home as soon as possible,” says Breier. In addition, she says, the willingness to help among Germans is even greater this time.

Kryzhanivska was lucky enough to stay with friends’ acquaintances in Neustadt. She is happy there, she says. However, not everyone is like that. “Carpets, furniture, shoes, such elementary things are often missing,” Kryzhanivska says. Breier and her team try to organize these for the visitors to the meeting place. “I heard about a family of eight where the mother always has to cook twice because the pot is too small,” Kryzhanivska says.

Despite the war, Kryzhanivska would have preferred to stay in Ivano-Frankivsk. When she left, her two sons, daughters-in-law, and young granddaughter lived in Kiev, as did her sister, who had cancer. Shortly after the war began, the family met and discussed how to proceed together. Since Kryzhanivska speaks German fluently, she was the first to go to Germany. “If the situation worsens, my relatives will join me. Fortunately, they are in Ivano-Frankivsk for now. It’s quieter there.”

Kryzhanivska is glad that she can help her fellow Ukrainians in Neustadt as an interpreter: “When I am busy, my life is easier. Our women are highly motivated, and all want to work. I don’t want to wait and sit around until the war is over.”