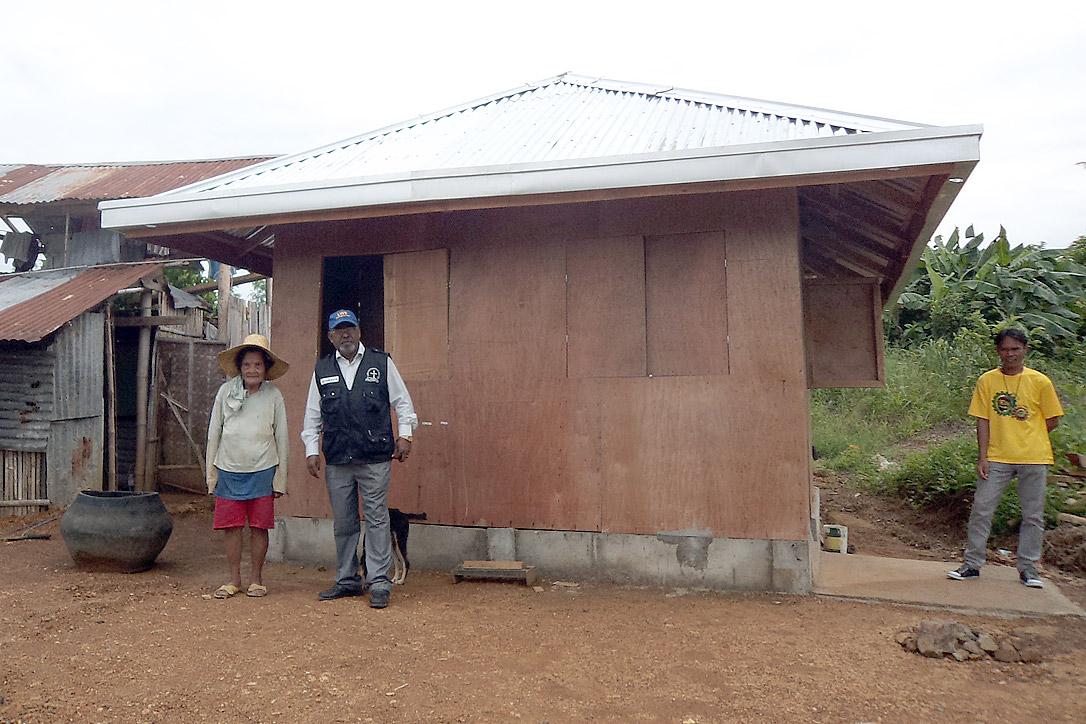 Following Typhoon Haiyan, Ms Nevita Romero Montermoso, 67, lived in the make-shift shelter on the left for nine months before moving to her new NCCP house in mid-July. Photo: LWF/NCCP

(LWI) – She describes it as her 67th birthday gift, and though it is categorized as transitional shelter, this is the only home for Nevita Romero Montermoso since she lost her house in Central Philippines nine months ago.

“I do not own any land, we live here as caretakers. But now the landlord allowed me to put up this shelter with flooring and attached comfort room [toilet], which is far better than my old shelter,” says Montermoso, who lives with her adult son in a new two-roomed house in Estancia municipality, Iloilo province.

Her family is among millions of people who lost loved ones, homes, property and livelihoods following the super typhoon Haiyan, which struck the Philippines’ central region in November 2013. Emergency support provided through the National Council of Churches in the Philippines (NCCP) has since enabled nearly 150,000 survivors in the worst hit regions of Tacloban and Iloilo to slowly rebuild their lives including the establishment of community-based disaster response mechanisms.

Montermoso says she and her son who works as a casual laborer in the nearby Estancia town are lucky to have survived, but their bamboo-mat house with iron sheet roofing was destroyed. “For 24 hours I had no food, until we received some food the next day from local individuals.” They managed to salvage some of the materials, which they later used to construct a makeshift shelter.

“And then in mid-July they [NCCP] gave us this new house. They told me that it is a transitional shelter, but I consider this as a permanent home for me. In my old house, some parts of the roof allowed in rainwater, and we had no proper floor,” Montermoso adds.

Through an initiative dubbed ‘building back better habitation’, the NCCP Typhoon Haiyan rehabilitation program is helping around 3,000 vulnerable families to clear habitable areas and rebuild more sturdy houses in the typhoon-prone regions of Tacloban and Iloilo. The assistance targets the poorest among the poor, female-headed households and families with disabilities. The new houses are built with reinforced coconut timber poles and marine plywood boards for walls, with firmly secured galvanized iron roofing and cemented floor.

The NCCP assistance is also about restoring livelihoods, some of which depended on the sea.

For 37-year-old Maricel Demapanes, a mother of seven children of who the eldest is aged 16, the typhoon obliterated the only source of family income—fishing. Her husband’s diagnosis with a terminal illness last December only complicated the situation, but things are looking up since she started her new job as an administrative assistant at the NCCP ACT Alliance office in Balasan.

Before typhoon Haiyan struck, the family of nine lived with Demapanes’ widowed mother in a rental house near the oil refinery in Botong town. The fierce storm not only damaged their house but also caused extensive oil spillage, which affected the fishing activities on which many families depended. “My little regular income of up to 300 pesos (USD 7) from fish sorting and filling was seriously affected,” she recalls.

She describes the NCCP emergency intervention with basic food items as “the best quality relief supplies we received from one source after the typhoon.”

Afterwards, the small income from the available petty jobs, the government’s cash support of 1,400 pesos (USD 32) per month for two months, and occasional assistance from her family barely sustained the family, including buying medicine for her sick husband and keeping the children in school.

Demapanes says they have come far since the typhoon’s devastation. When the oil spillage totally damaged their house, they moved to an evacuation center, where they first lived in tents and then moved to makeshift shelters constructed with material salvaged from their first home, until they received a temporary shelter kit from a non-governmental organization.

“With a new job since mid-July I feel that I am secured with a regular income, and I can plan my family expenditures,” Demapanes says. She is also happy to be part of a team that is helping the local communities acquire the necessary awareness and skills to manage the risk of disaster in a region with regular storms.

“We are grateful for the assistance received, and continue with our prayer to God to ‘Give us this day our daily bread,’” she adds.

Mr K. G. Mathaikutty, a member of the LWF emergency roster in Asia currently assessing LWF-NCCP intervention in Tacloban and Iloilo, says that while recovery for Typhoon Haiyan survivors will be slow, progress has been made in setting up a reliable community-based disaster response mechanism. “The goal is to ensure awareness raising that helps communities to prepare for emergencies such as typhoons, coordinate assistance effectively, and build back better and more resilient communities,” he adds.

(Mr K. G. Mathaikutty, a member of the LWF Department for World Service emergency roster in Asia contributed to this article.)