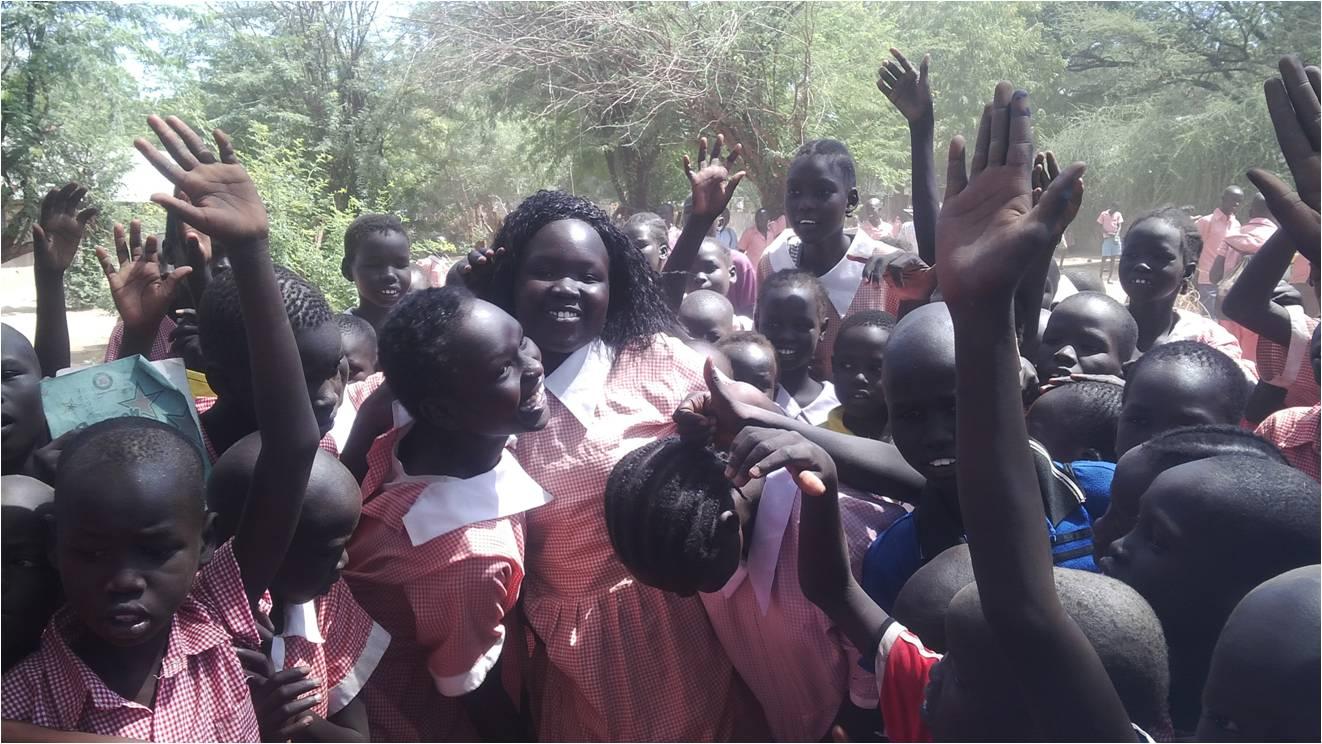 (LWI) - The dust has finally settled and top performing Kenya Certificate of Primary Education (KCPE) class of 2015 candidates have had a week celebrating their achievements. Some are even gracing national TV stations to tell the whole world what it took for them to excel in the examinations. Others had parties in their honour as parents, siblings, former teachers and schoolmates seek to share in the glory.

However in far away Kakuma Refugee Camp, Turkana County, 17 year old Margaret Awak Aguer is still coming to terms with her performance. Margaret defied all odds to score an amazing 400 out of a possible 500 Marks in the examinations and thus became the best student in the entire refugee camp where 2,939 (607 female) candidates from 19 primary schools managed by the Lutheran World Federation (LWF) sat the examinations.

Shambe Primary School in Kakuma Refugee camp, which Margaret attended is a nondescript school with a student population of 2,226 (838 female) but no aesthetic beauty to write home about. The classes are usually overcrowded and hold an average of 148 learners per classroom. That however, did not deter Margaret and her fellow learners from pursuing their dreams. In 2015, the school presented 219 (38 female) candidates for KCPE.

Margaret’s story is that of hard work, humility, discipline and desire to succeed in life, despite the obvious obstacles on her path. In 2010 at the age of 12, she arrived in Kakuma from Jonglei State, South Sudan accompanied by her aunt Sarah Abul, her younger brother and 3 other cousins, leaving her father, mother and two siblings behind as she pursued education at Kakuma Refugee camp. Her parents and the rest of the family eventually followed but she continued staying with her aunt Sarah because of the distance to the nearest school.

“I really wanted to go to school immediately but every time I went, some older children would bully me and so I stayed home to avoid being bullied,” says Margaret. She gathered courage and decided to confront her fears head-on and the following year she confidently enrolled in Class 4 at Shambe Primary School, about 2km from her home.

Like many other girls in similar settings, Margaret had to balance studies and domestic chores, like fetching water and firewood, washing and occasionally assisting her aunt with cooking for the family. “I enjoy cooking and can make very good mandazi,” she says, adding that her aunt has always been very supportive and even bought a solar lantern to enable her study at night.

“Whenever she came from school, she used to assist with the work, eat dinner and then study until around 11pm. In the morning she wakes up at 5am to fetch water, help prepare breakfast before leaving for school,” says her aunt Sarah.

Education outside the camp

On the day the results were released, Margaret was unwell and had gone to the camp clinic for treatment. “While at the clinic, a boy who had also sat KCPE told me he had checked his results via SMS. Not knowing what to expect, I left the clinic without collecting my drugs and ran back home, bought airtime for my aunt’s phone and checked my results. I could not believe what I saw on the screen until I went to school and confirmed that I had actually scored 400 marks,” says Margaret with a wide grin.

She also adds that it was a big miracle for her, having failed to finish a previous paper and having not done the county preparatory mocks due to sickness. “Kiswahili was the most challenging one for me,” she says, though she still scored an A with 80%. She is full of praise for her Kenyan class teacher who kept on encouraging and guiding the candidates as they prepared for the exams. “He brought us many books and revision materials and spared his time to help us understand questions better,” explains Margaret.

Margaret now expects to join a national school, giving her an opportunity to go outside Kakuma Refugee camp for the first time since 2010. “I want to study law and eventually become a judge,” she reveals excitedly.

Some of Margaret’s best memories of school include the mid-morning porridge that provides students with much-needed energy. “Some children go to school on empty stomachs and cannot even concentrate in class without that porridge,” she says, adding that growing up and attending school in a refugee camp has taught her to always work hard and stay focused. “You can achieve anything despite your surroundings if you do your part and leave the rest to God,” she says. “Success does not just come, you have to work hard for it.”

Out of the 2,865 students who sat the exam, 94 percent passed, an improvement from 87 percent in 2014. This means that, in accordance with government requirements for secondary schools admission, these 2,679 students from Kakuma Refugee Camp are eligible to pursue further education in government schools outside the camp. “The key issue now is to put in concerted efforts to see to it that all the meriting pupils get form 1 placement both in the camp and the government schools,” LWF country representative in Kenya-Djibouti, Lennart Hernander, says.

The schools are funded by United Nations High Commissioner for Refugees. The World Food Programme supports with a daily cup of porridge for every child attending school in the camp. Students are taught by teachers trained by the LWF, many of which are refugees themselves.