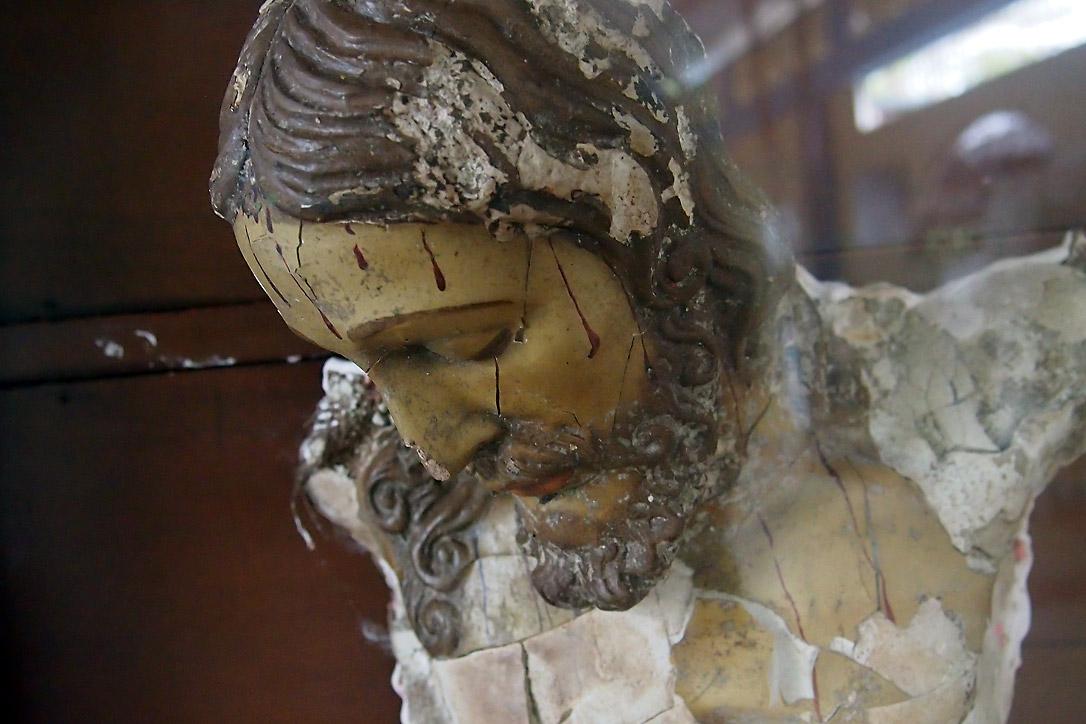 The torso of the crucifix in the church of BojayÃ¡, Colombia. The explosion which killed 119 people also blew away the arms of the statue, making it a symbol of the violence which took place. Photo: LWF/Kaisamari Hintikka

(LWI) – "Forced displacement is a terrible experience,” says Juana Francisca Mosquera, who was forced to flee to Quibdo from her native Bojayá, Colombia, after receiving death threats.

“Having to flee quickly from your home, alone, without anything, without work, to a place that you do not know and where there is nothing, is very hard. It’s especially difficult for women who are alone with young children. But I thank God, Caritas and the LWF because they have always accompanied the surviving victims of the massacre and have supported us in many ways."

Department of Chocó, located on the Colombian Pacific coast, is perhaps the most abandoned and suffering region in the entire country. Until the ceasefire, the area was contested territory between different armed groups, a favored route for drug and weapons trade. The region has a long history of land grabbing and human rights violations, which predominantly affect the indigenous and African population.

According to official data, four out of five people live below the poverty line, and the majority of the population suffers from lack of clean drinking water, sanitation, proper shelter, enough food, warm clothes and education.

Our joint work has led us to understand that the gospel’s values ​​go far beyond any religious denomination, and that ecumenical work for the well-being of people is very important.

In 2002, the town of Bojayá in Colombia’s Chocó district was the site of a massacre, committed by FARC-EP guerilla during the fight against government forces. Some 119 people, many of them children, died, and 89 were injured when a bomb exploded inside Bojayá church.

Last year, The Lutheran World Federation (LWF) Colombia program and one of its most important local partners, Caritas Colombia, through the Catholic diocese of Quibdo, accompanied the victims of the Bojayá massacre through the court case.

LWF and Caritas have been working together since 2009 initiating interethnic dialogue and the promotion of local peace initiatives. Local to global initiatives such as the Universal Periodic Review have the goal of making the problems these populations face visible on the international level. The UN Human Rights Council offers an opportunity to convince local and national authorities to commit to support these communities.

"Caritas has been a strategic ally for LWF in the country,” says Saara Vuorensola-Barnes, LWF Country Representative in Colombia. “We have made it possible for the voices of the most marginalized and vulnerable, Afro-Colombian and indigenous populations, to be heard, both in Colombia and in the rest of the world. We are united by the desire to continue working together to improve the living conditions of these people and we know we can do much more. "

"Our joint work has led us to understand that the gospel’s values ​​go far beyond any religious denomination, and that ecumenical work for the well-being of people is very important, “Sterling Londoño Palacios, a Catholic priest and vicar general of the Diocese of Quibdó- Pastoral Afro, says.

When the Bojayá massacre was tried in court more than ten years after it happened, LWF and Caritas joined hands to help the Bojayá community develop a position paper to represent the victims of the massacre and define the kind of compensation they wished to receive. The document included demands for guarantees of non-repetition of violence for victims and their families. This paper was presented at the trial, in December 2015. The trial eventually resulted in the FARC-EP asking the survivors for forgiveness.

On 31 October 2016, LWF World Service and Caritas Internationalis will sign a Declaration of Intent at Malmö arena. The Declaration outlines further cooperation in humanitarian and development work. The signing is part of the Joint Catholic-Lutheran Commemoration of the Reformation anniversary in Lund, Sweden.

The event in Malmö Arena will be a stage for activities focusing on the commitment to common witness and service of Catholics and Lutherans in a world, wounded and broken by conflict. Highlights of the joint work of LWF World Service and Caritas Internationalis will be featured, including care for refugees, peace building, and advocacy for climate justice.

Stop the spiral of violence in Colombia
news