‘There’s no commandment greater than loving your neighbor’ 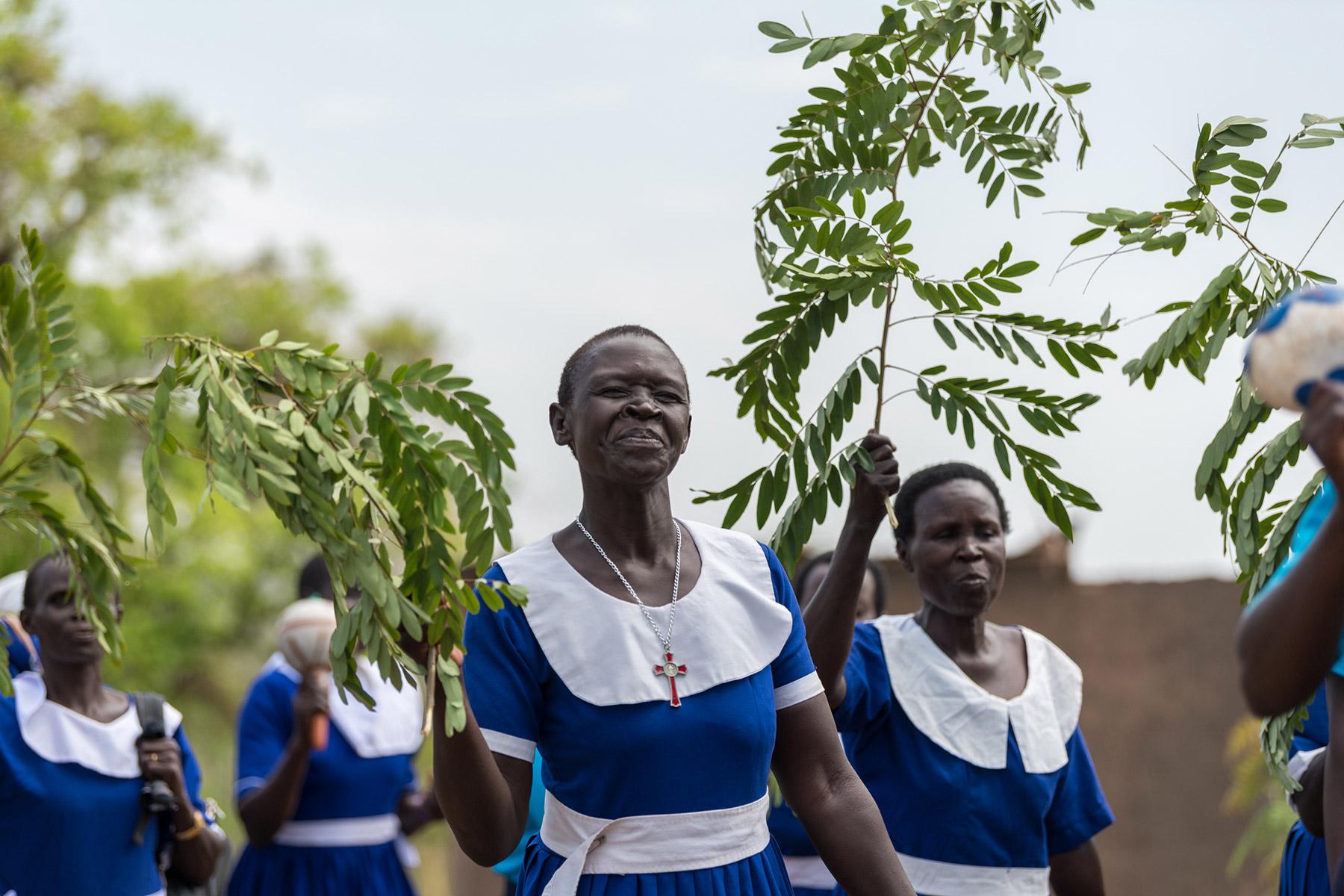 A group of women from the Kajo-Keji Diocese march to church in the refugee settlement of Palorinya in Obongi district, West Nile area of northern Uganda. All photos: LWF/Albin HillertÂ

(LWI) – “Love your neighbor as yourself, there is no commandment greater than this,” said Anglican Bishop Emmanuel Murye Modi of the Episcopal Diocese of Kajo-Keji, as his congregation was joined by the Lutheran World Federation General Secretary, Rev. Anne Burghardt, on 3 April at the Macedonia church in Palorinya refugee settlement, West Nile area of northern Uganda.

The significance of those words may not have been lost to anyone. The Bishop himself is a refugee from South Sudan, continuing ministry by serving his congregation in what has come to be Uganda’s second largest refugee settlement, with a population of more than 128,000 refugees. 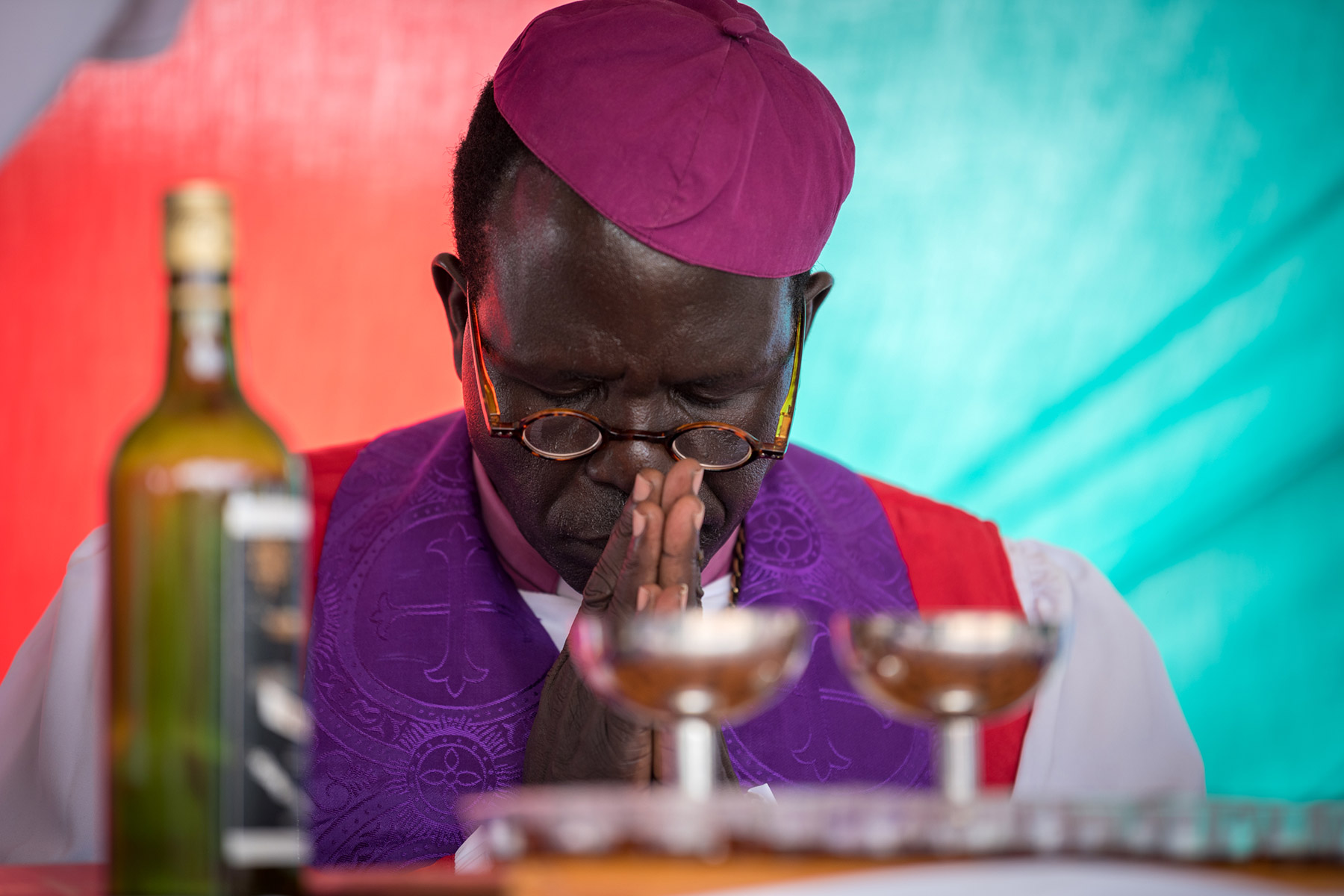 Anglican Bishop Emmanuel Murye Modi of the Episcopal Diocese of Kajo-Keji kneels down in prayer before Holy Communion.

Following the eruption of war in South Sudan, the Diocese of Kajo-Keji in the country’s Central Equatoria State, decided to move with some 350 congregants to seek refuge in neighboring Uganda.

Today, the diocese is hosted under the auspices of the Diocesan office of the Anglican Church in Moyo, Uganda, and since 2017 has been able to continue to gather and worship as a congregation in the Palorinya settlement.

The simple church structure raised in Palorinya recently had its roof blown off by strong winds and is awaiting repair, so on 3 April, worship took place under a group of tents – offering to congregants a spot of shade from an otherwise burning sun.

Congregants gathered for worship under a group of tents in the Palorinya settlement.

Being in northern Uganda on a week-long visit to the Lutheran World Federation World Service program in Uganda, LWF General Secretary Rev. Anne Burghardt had occasion to take part in the service celebrating the fifth Sunday of Lent. 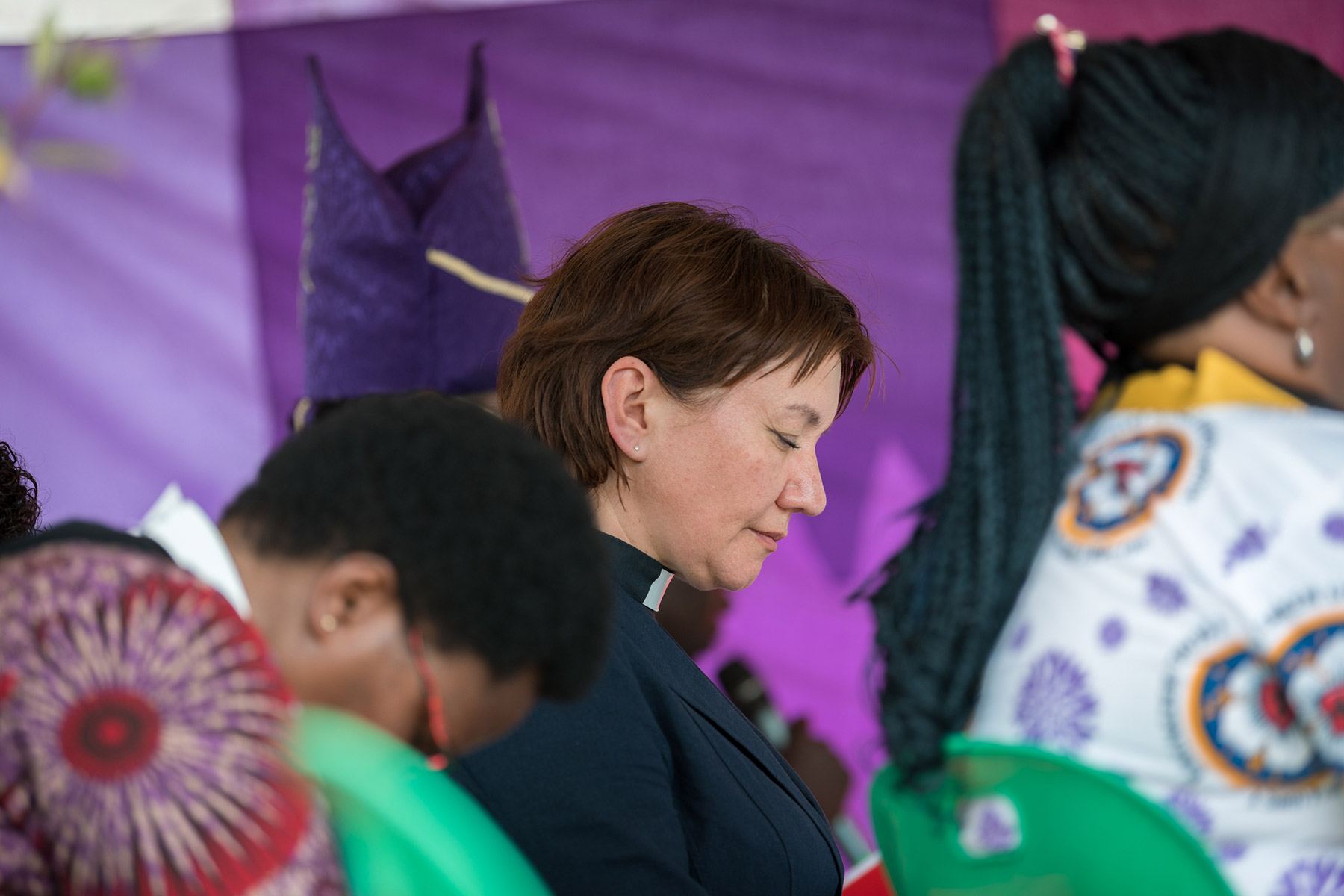 Rev. Anne Burghardt closes her eyes during a moment of prayer at the Macedonia church in Palorinya.

The LWF has a long-standing history supporting refugees in Uganda, and Palorinya is one of the settlements where the LWF World Service program continues to serve. For more than 40 years, World Service has operated under the auspices of the Anglican Church in Uganda.

For Burghardt, worshipping with the Anglican congregation held a particular significance, as Lutheran-Anglican relations used to be her responsibility in a previous tenure with the LWF Communion Office. 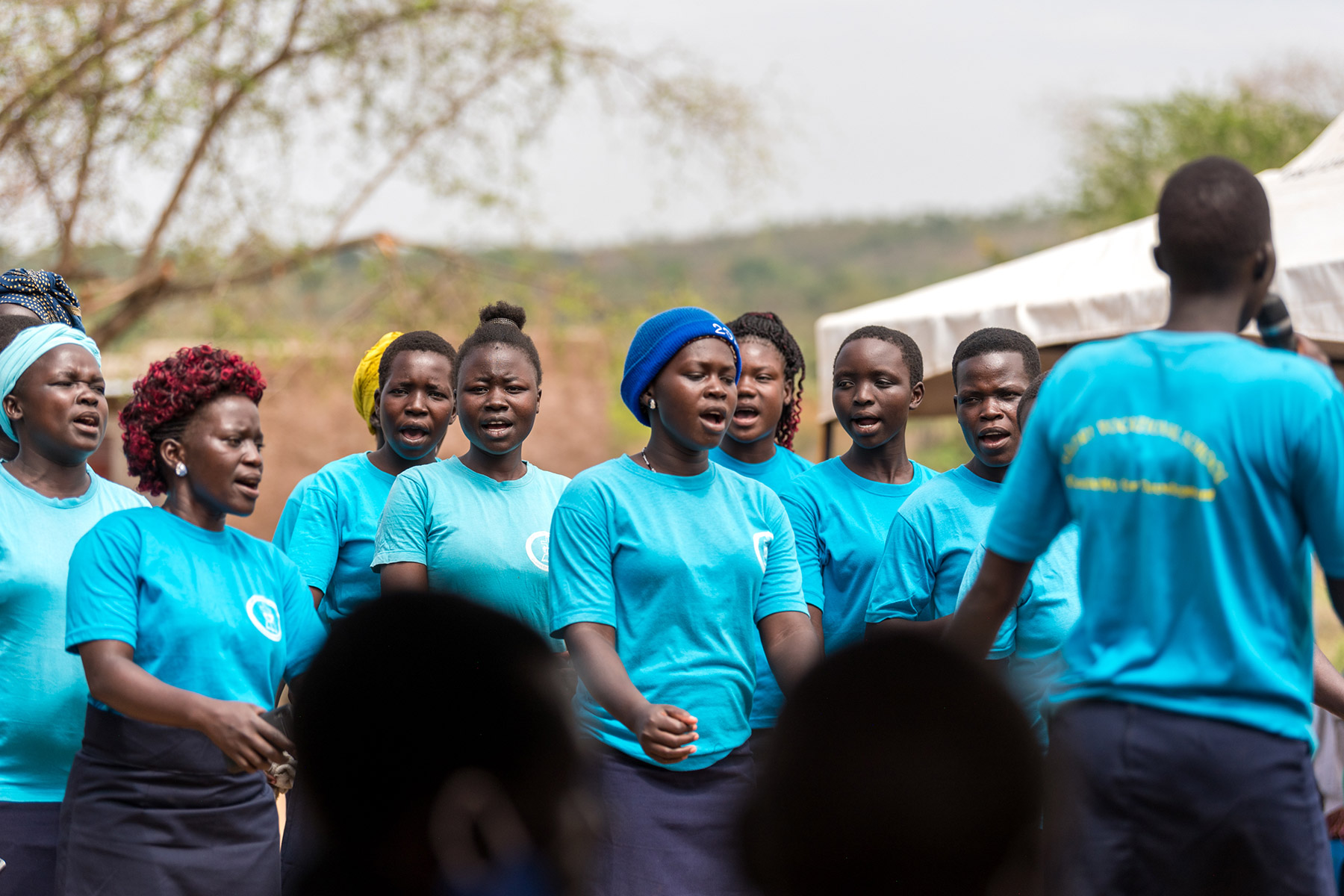 “We welcome you. Remember, remember, don’t forget us,” sings a group of women from the Glory Vocational School, as they participate in Sunday service in Palorinya.

“The brokenness of the world often expresses itself through divisions and separations, such as tensions between different ethnic groups, nations, but also oftentimes between Christians” reflected Burghardt. “It is good to worship here together with our Anglican sisters and brothers as a sign of Christian unity.” 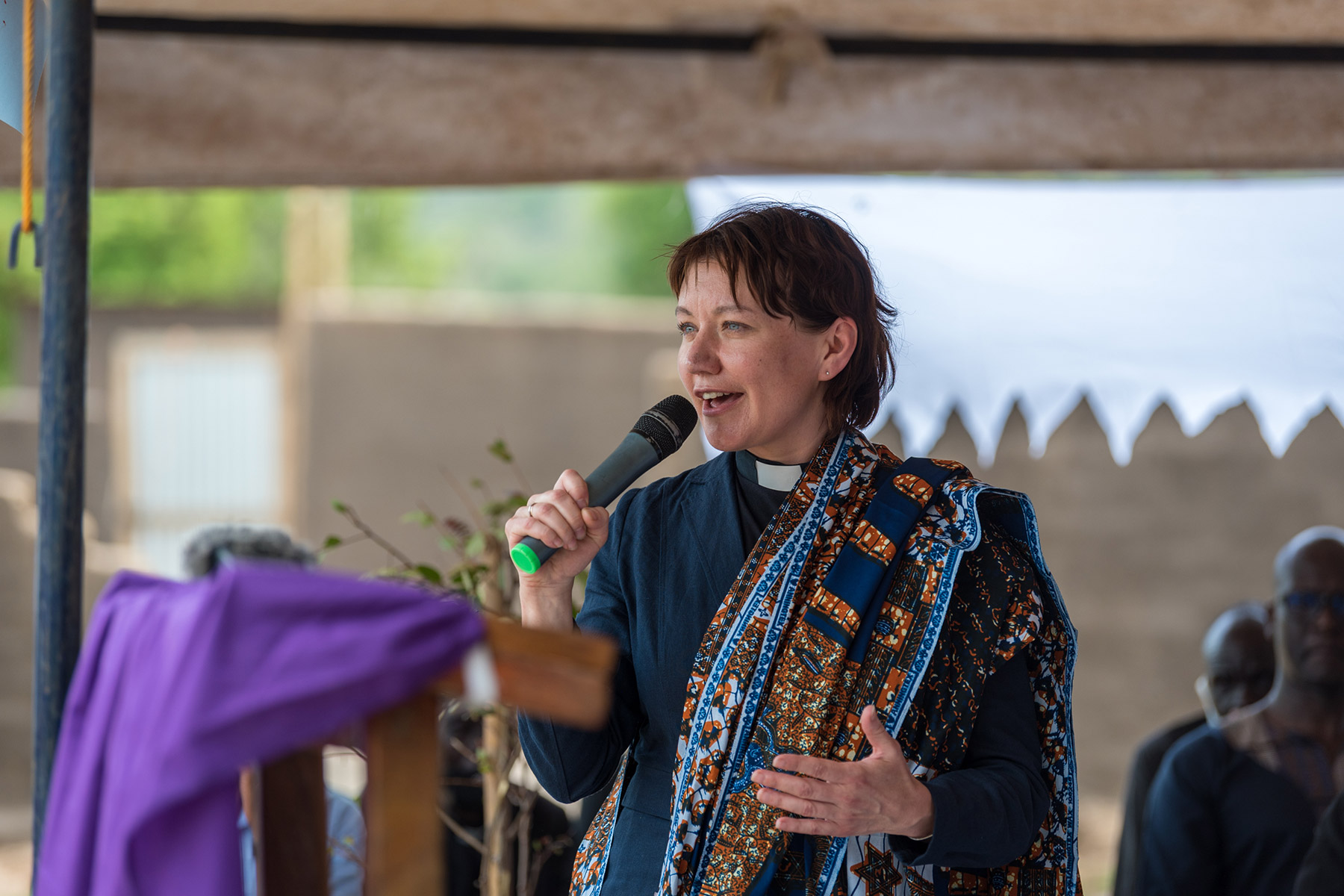 Rev. Burghardt speaks to the congregation in Palorinya, dressed in a robe offered to her as a sign of welcome by the Women’s Union of Kajo-Keji.

Preaching as a guest at the service Bishop Jones Ole Meliyio of the Kenya Evangelical Lutheran Church – a member of the LWF General Secretary’s delegation to Uganda – reflected on the importance of not losing sight of Jesus in face of hardship. 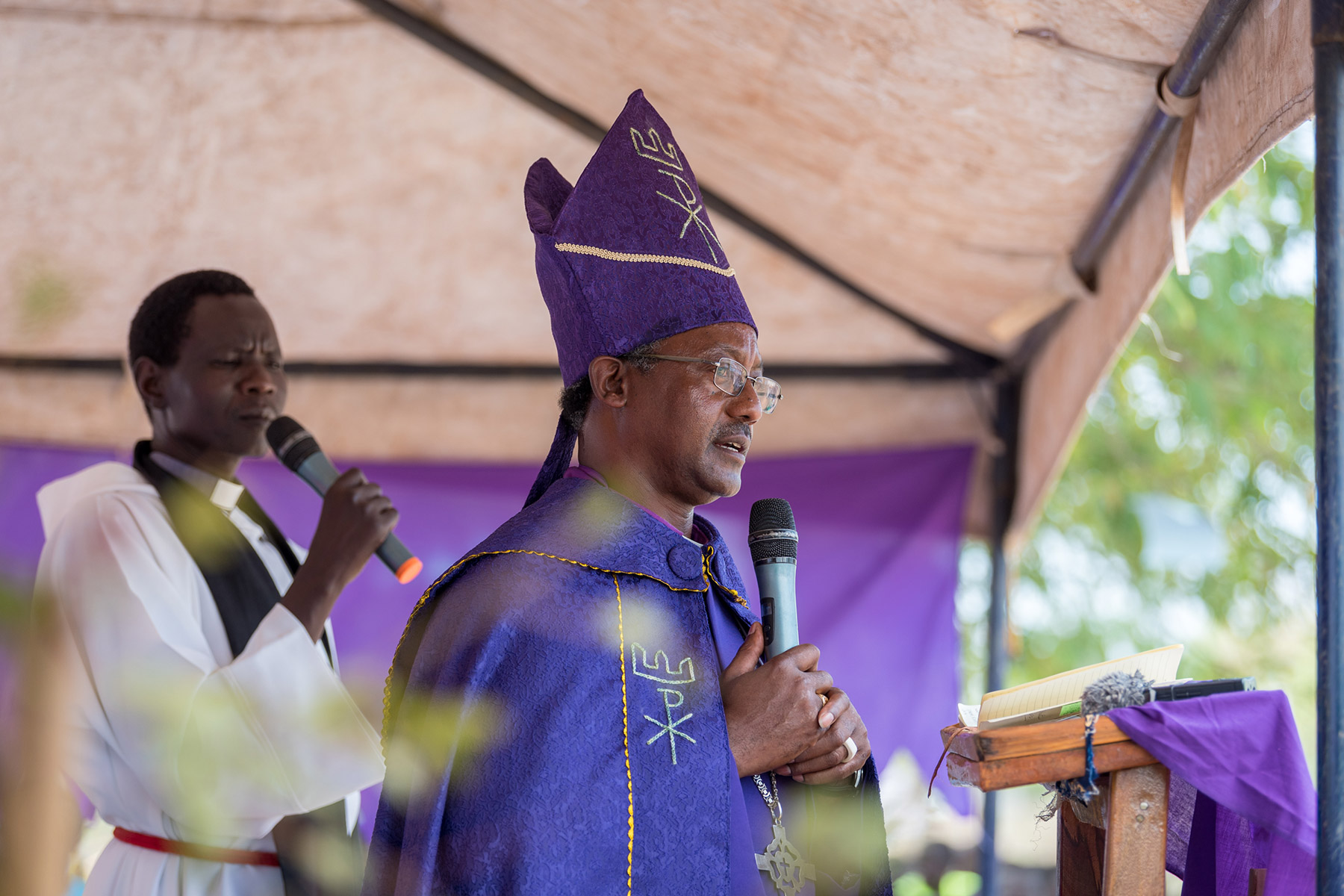 “The struggles we are going through are temporary. Even though he was God’s son, Jesus was a person just like us. When we suffer, we know are with Jesus,” he said. 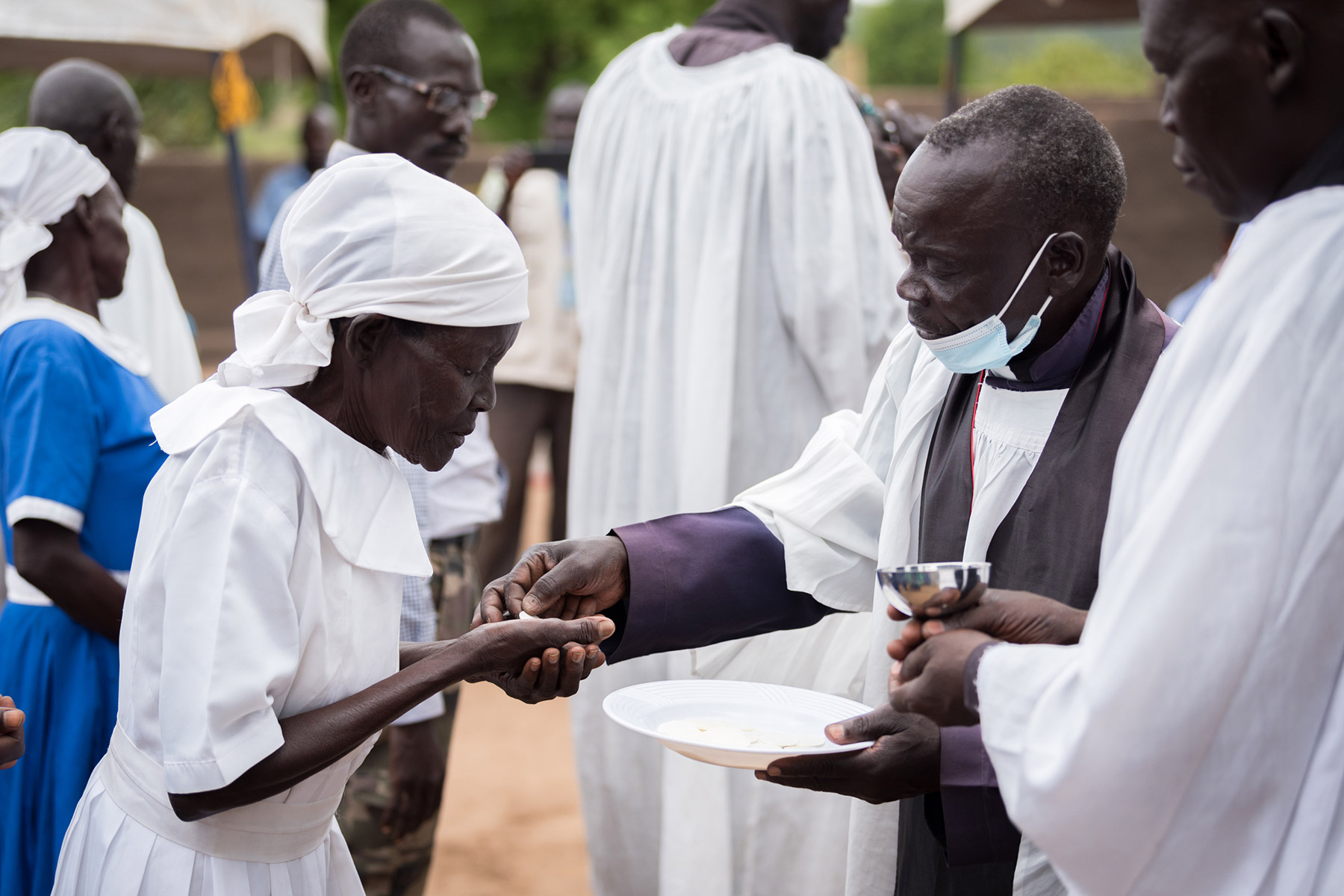 An elderly Kajo-Keji congregant receives bread and wine at Macedonia church on Sunday.

“May we pray that God will intervene in our lives. We need God to lift us up from the darkness that we are in,” Meliyio added.

Bishop Emmanuel Murye Modi concluded, “your visit to Palorinya refugee settlement is significant and historic. It shows a concern and creates hope to the refugees. May God bless you,” he said. 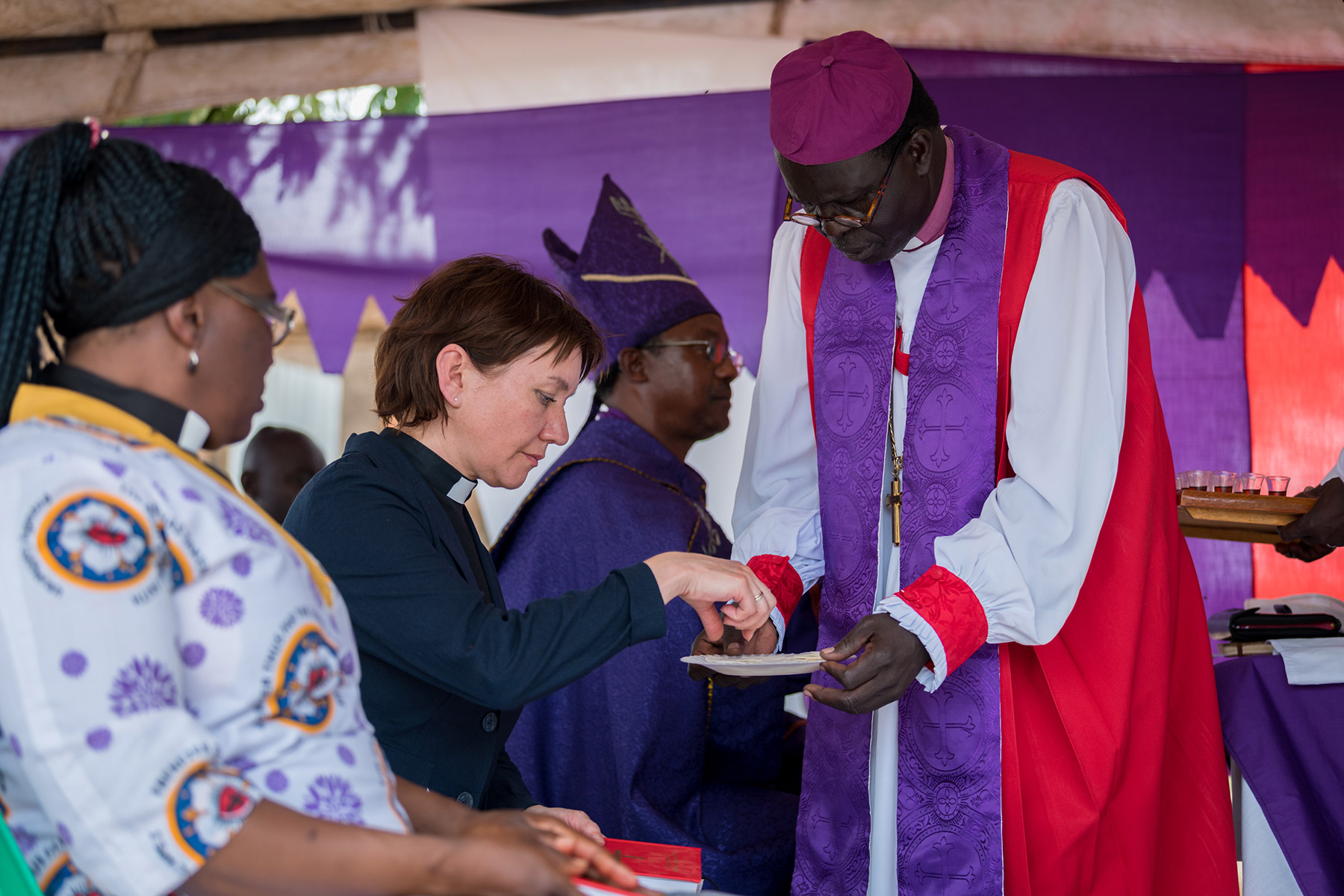