Voices from the Communion: Archbishop Antje Jackelén looks back at highlights and challenges of her leadership 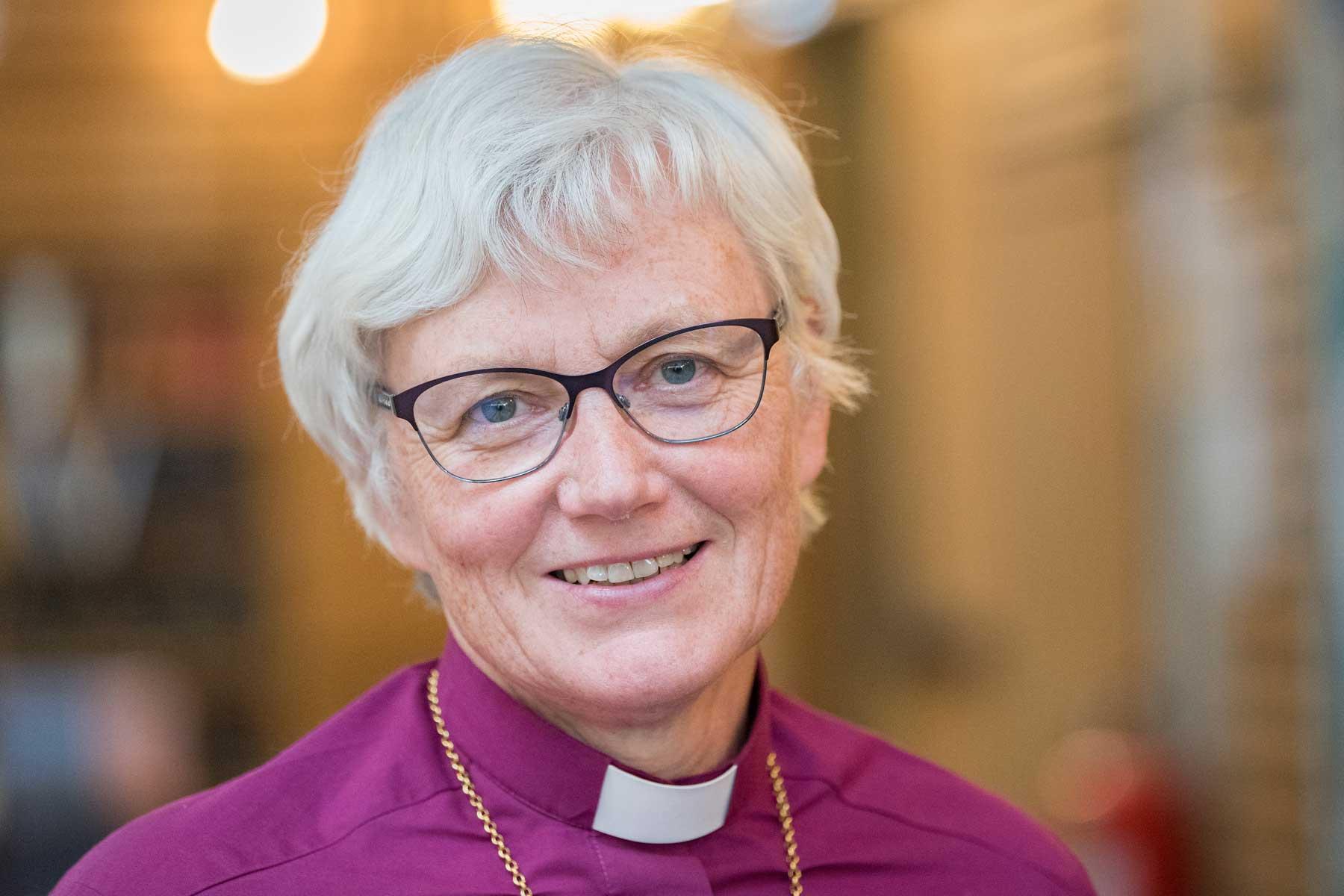 Archbishop Antje Jackelén ends her term as head of the Church of Sweden in October. Photo: LWF/A. Hillert

Voices from the Communion: Archbishop Antje Jackelén looks back at highlights and challenges of her leadership

(LWI) - There have been so many highlights since Archbishop Antje Jackelén took up her role in 2014 as head of the Church of Sweden that she is hard pushed to name her favorites. She has met with popes, patriarchs, presidents and prime ministers, but significantly, she also names the apology that she delivered to Sweden’s indigenous Sami people as among the most important moments of her past eight years in office.

Along the way there have been some difficult times for Jackelén, who also serves as the Lutheran World Federation (LWF) vice president for the Nordic region. In the spring of 2021, the social media-savvy archbishop announced she was taking a break from Twitter because of the “threats and hatred and lies” to which she was subjected by those who bitterly oppose her views on integrating migrants into Swedish society.

As she prepares for the end of her term in office this autumn, Jackelén looks back at some of those key moments and reflects on the challenges of serving as the first female leader of her church.

You will be stepping down as primate of the Church of Sweden on October 30th this year – what would you choose as the main highlights of your time in leadership?

I have to start with 2016 and the joint commemoration in Lund of the 500 years of Reformation. I learned a lot during the preparations and it was so significant that Lutherans and Catholics could celebrate together, lamenting the pain and suffering caused by our divisions, but also giving thanks for what we have in common and for the Gospel.

It meant that, in many places around the world, the Reformation was really celebrated as a Christ festival and not as a sign of division. Also, the prayer service in Lund Cathedral, followed by the ‘Together in Hope’ event in Malmö arena beautifully illustrated the way that word and deed, liturgy and diakonia, always belong together. 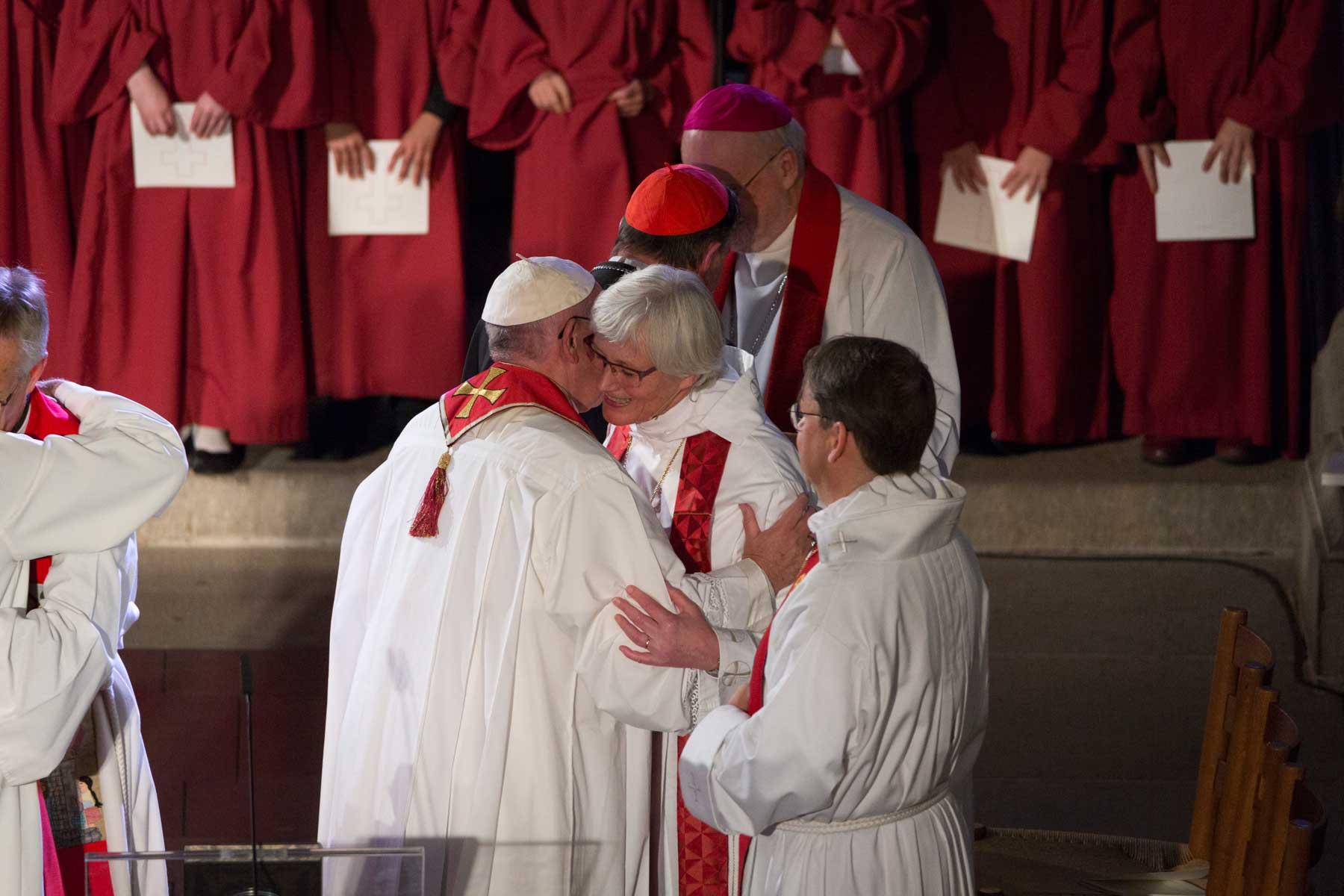 I have had so many important ecumenical encounters: apart from Pope Francis, we had [Coptic] Pope Tawadros, [Ecumenical] Patriarch Bartholomew and Patriarch Aphrem from the Syrian Orthodox Church. I had the privilege of travelling to so many countries, including places where the church is living with structural discrimination or worse, and I hope I have been able to communicate some of these learnings into my own church.

The ‘A World of Neighbours’ initiative that the Church of Sweden started has been very important for me too. It started with the idea that two people would travel around Europe meeting grassroots practitioners working with people on the move. This led, intentionally, to an interfaith dimension and created networks of practitioners who could help to train others.

Last February, we held a summit which culminated on 24th, the day that Russia invaded Ukraine, and it felt so meaningful to be with these practitioners who do such wonderful work, often with few resources. The Church of Sweden is ending its active role as driver of this initiative, but the network carries on and it is beautiful to see it continue with a life of its own. 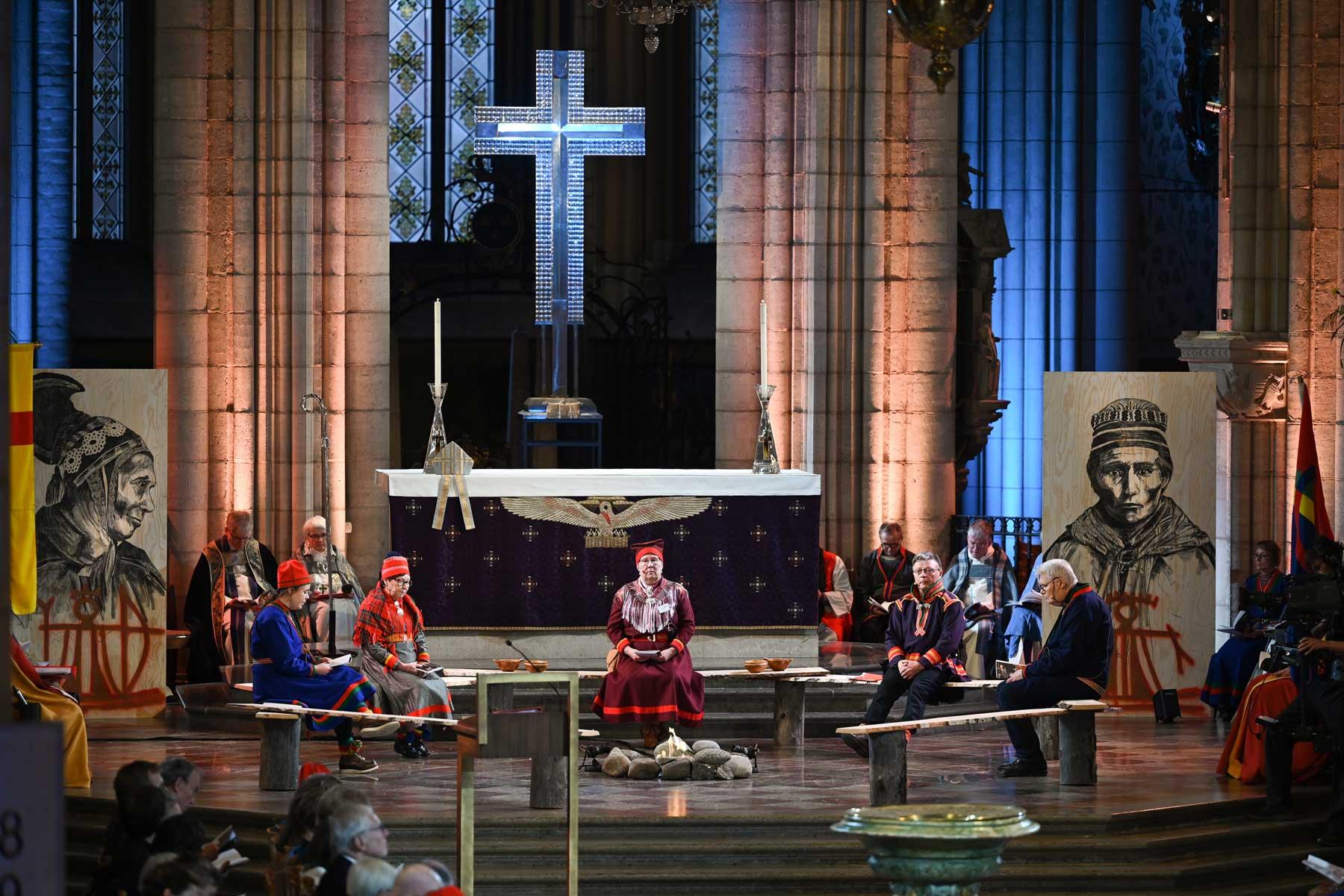 I also have to mention the Truth and Reconciliation process with the Sami people, which started long before I became archbishop, but I was able to offer an official apology during the liturgy in Uppsala Cathedral, the symbolic center of power. We are going to express it once more in Sápmi [at a conference in Luleå on 21-23 October] and we are determined to work diligently with the commitments we have agreed upon. It is an ongoing process but I am so grateful we have taken these important steps.

I am so grateful, as well, that over these years there has been a growing awareness that the climate crisis is also a spiritual and existential crisis – that is another important development that the church has played a part in.

Yet, at times, you have been targeted for your views on social media and had to retreat from Twitter because of the hate speech you received, haven’t you?

Yes, the hate speech has been very challenging, also because of how social media platforms have developed and multiplied over these years and I am the first Church of Sweden archbishop since this widespread breakthrough began. I think it is important to remember that when book printing began, they did not just print nice books, but also hate pamphlets and we know that Martin Luther himself was not immune from this!

We also know that women in leadership are more exposed to hate speech than men. The problem is not only that it is directed at you, but it also affects all those who follow you on social media. Hate speech can make our views appear polarizing, when all we are doing is standing up for mainstream Christian values, so it takes effort to stay focused and resist self-censorship.

What advice would you give to others who are being targeted in similar ways?

It is always good to have people to consult, because if you are alone, it can be hard to maintain a sense of proportion. Other people help to build your resilience, but it may be necessary to take a break and to restrict the possibility of people responding to your tweets. I found that so hard because listening and being empathetic is part of my pastoral identity, but social media forced me to put up a shield to protect myself.

You were the first woman elected as leader of your church – what progress have you seen over this time for women’s rights, both in your own church and in the wider Lutheran world?

In the exhibition to mark the LWF’s 75th anniversary, there is a beautiful photo of Prasanna Kumari, who was a doctoral student in Chicago when I was there [as a professor at the Lutheran School of Theology]. I heard about her struggles, also in the LWF, for women to have access to decision-making, so I think a lot has happened since then. I believe gender justice work is important and has led to progress, but of course, there are backlashes too.

I celebrate the recent ordinations of women for the church in Poland and I remember also the joy that people showed when I was elected. We shouldn’t forget the joy, but the patriarchal reflexes are so deep and have taken centuries to take hold, so we have to keep working and not take anything for granted.

What would you say to women who still suffer from discrimination in the church?

I think partnerships with both women and men are important for this work and also the examples of role models. We need updated models of masculinity and we should not underestimate the power of narratives to change attitudes. Even if there are backlashes, it is important to remain hopeful and know that the movement for equality is irreversible in the long run.

Patriarchy is one of the destructive ‘five Ps’ that you often speak about [alongside populism, polarization, protectionism and post-truth]. Which of these worries you most and what can the church do to combat them?

It is the destructive synergies of these five together that is most worrying, but I think there is a lot that the church can contribute to counteract and challenge them. To combat polarization, we need a healthy culture of dissent. The opposite of polarization is not unity or uniformity, but a healthy way of dealing with differences and we need to foster that culture.

Populism works by provoking negative emotions and so we must insist on being more matter of fact. We can also stand against protectionism by being a global communion, by fostering ecumenical and interreligious dialogue, by showing a multifaith response of solidarity to those in need. We know that speaking the truth to power in complex situations requires a lot of work and courage, but here too we have a lot to offer with our Lutheran hermeneutics and our tradition of interpreting scripture. 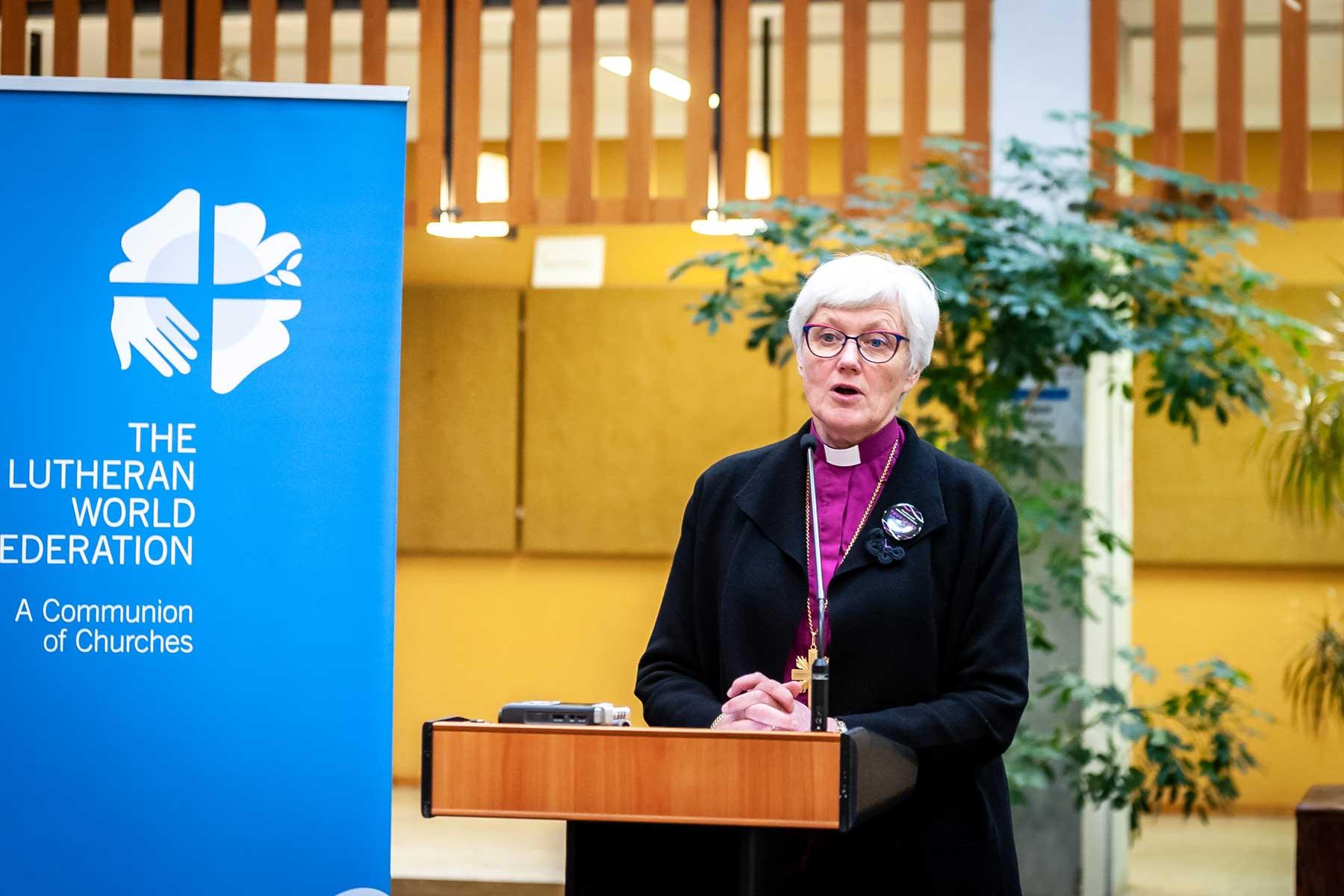 As for patriarchy, our beliefs are grounded in God creating all humans in equal dignity and we have many examples of the way Jesus interacts with women. Take the story of the Syrophoenician woman asking Jesus to heal her daughter, a request he initially refuses, saying he has only come to heal the people of Israel, that it is not right to take their food and throw it to the dogs. When she insists that even the dogs have a right to the crumbs that fall from the master’s table, she helps Jesus to realize that his mission is not local but global. We can say that she changes the course of history, that she is the first champion of a ‘glocal’ theology. We have so many narratives like this to encourage and empower us, to foster that hope that leads to action.

You talk often about narratives of hope but how do you respond to those who are worried by the increase in conflicts, the war on Ukraine and other injustices?

There are moments when it’s easy to feel discouraged and it is right to give expression to our discouragement. In difficult times, I realize how much I turn back to the Psalms and appreciate the wealth of feelings we find there. In times of chaos and crisis, sorrow or anger, frustration or even a desire for revenge, it is right to bring it all to God and pray that God will guide us to transform our fear into hope and actions of love.

How important is it for you to be part of the LWF’s global communion of churches?

It is becoming ever more important and I like to think that awareness of this, within the Church of Sweden, has increased too. In 2017 we adopted a new book of worship that contains more emphasis, especially in the baptismal liturgy, on being part of the global church. We also hear more from churches in the global south and experience more of the way that we journey together, learning from each other and increasing our sense of common mission.

Finally, what plans do you have after you step down from this high-profile position?

I will continue to serve as LWF vice president until the next Assembly. I’m also looking forward to being more engaged in my role [as co-president] with Religions for Peace. I have a keen interest in digitalization, from my background as a researcher into science and religion, and the question of technology and theology is a burning one in Swedish society so I hope to delve deeper into that too. And I love being with students as well, so I hope there may be other opportunities there too.

USA: “We are connected to a larger, growing Lutheran family”
news
t