Sweden: Don’t go down the road of hate speech 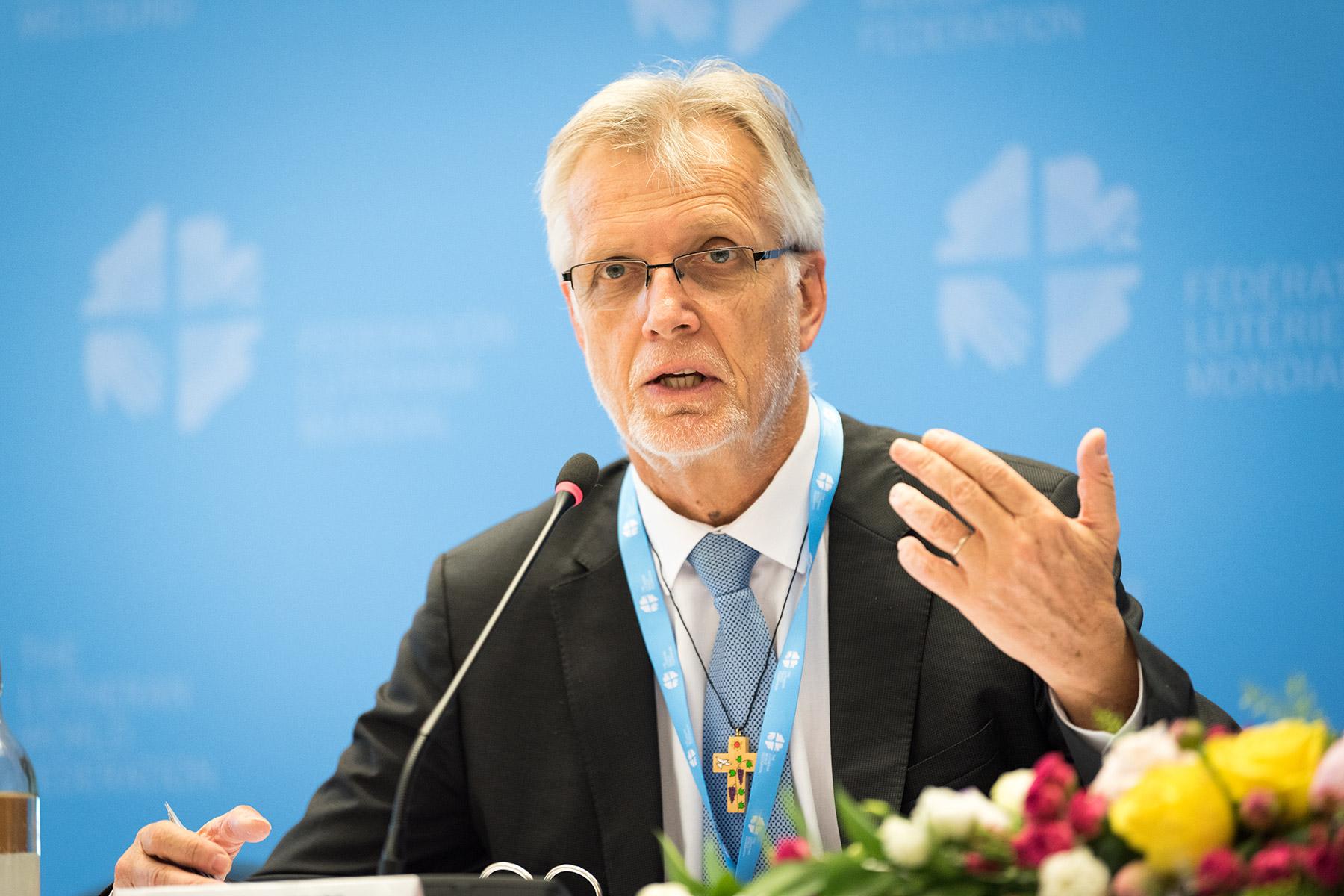 (LWI) - The Lutheran World Federation (LWF) General Secretary Rev. Dr Martin Junge has spoken out about his “deep concern for the current degradation of public discourse” in Swedish society. His words come after the head of the Church of Sweden, Archbishop Dr Antje Jackelén, announced she was taking a break from Twitter because of the “threats and hatred and lies” to which she has been subjected on social media.

The archbishop, who serves as LWF Vice President for the Nordic region, made the announcement following an upsurge of abuse over comments she made about requirements for immigrants applying for citizenship in Sweden. The country is facing heated debate over government proposals for all applicants to provide proof that they have passed tests in spoken and written Swedish.

Junge says that he received the news of these “despicable verbal attacks” on the archbishop’s Twitter account “with dismay and shock.” He shares the reasons for his concern in an interview with the Lutheran World Information.

Why are you speaking out about this issue which, some would say, is a question of internal Swedish affairs?

I am deeply concerned because history tells us that where hate speech prevails, violence follows. It happened in my country, Chile, where I experienced it as a teenager, and it happens in many countries of the world today, including Europe. Hate speech stigmatizes individuals and groups because of their political convictions or religious beliefs, their origins, gender or the color of their skin. It makes the collective moral compass of society go astray and eventually leads to the collapse of democracy.

I am deeply concerned about the current degradation of public discourse and argumentation in Swedish society. Hate speech unleashes the demon of violence, oppression and dehumanization of others. It always leaves destruction in its wake and I urge people everywhere, also in Sweden: don’t go down that road.

Traditionally, Sweden has been a safe haven for refugees, with the church in the forefront of offering hospitality and support to asylum seekers. Why do you think attitudes towards immigration are changing now?

Yes, the Church of Sweden was a founding member of the LWF in the dramatic period following World War II, with the huge number of refugees caused by that conflict. I always feel immensely grateful to our forefathers and foremothers who came together in Lund and saw the need to create a structure to respond to that crisis. It was one of the first decisions that the LWF took at their founding Assembly and it was a result of their firmly-held spiritual conviction that loving our neighbors is a deep expression of our faith.

Today, the LWF – including the Church of Sweden as an active member of our global communion – serves some 3 million refugees and displaced people around the world. Most of them are no longer European and many of them are not Christian either, but they are still refugees and we continue to serve them because we are Christians.

The Geneva Refugee Convention consolidated a shared understanding of the international community regarding the rights of refugees and the obligations of states to protect them. This convention protected refugees then and it protects refugees today. I observe with increasing concern how the Geneva Refugee Convention is being pushed aside and undermined by legislation and practices that are not aligned with the obligations that result from it. There is a crisis of accountability.

How can we best respond to this crisis?

We live in a world of neighbors. As we come closer to each other in our increasingly globalized society, we become more aware of the ‘otherness’ of people from different countries and cultures. Some of this ‘otherness’ unsettles us and even puts into question some of our deepest-held beliefs, be they individual or collective. This can lead to fear and a hardening of attitudes that we see today.

The Gospel tells us clearly to love our neighbors. The task we face today is learning how to be, or to become, good neighbors. How to negotiate our differences and define together what we identify as a collective public space, with its intrinsically democratic nature.

We can learn a lot from LWF member churches that live as minorities, often in overwhelmingly secular contexts, or in places where other Christians or other faiths form the majority of the population. Interfaith dialogue and cooperation are, therefore, normal features of those churches and as Lutherans, we will always propose dialogue as the responsible way to shape the public space. I really welcome the way that many churches in Europe – including the Church of Sweden with its World of Neighbors project – are actively promoting this approach and helping to shape communities in constructive ways.

What do you say to those who believe that such dialogue is naïve and undermines the foundations of our Christian faith?

Let me be clear: interfaith dialogue has nothing to do with syncretism or betraying the deep foundations of our faith. Rather, it is the other way around: by engaging in dialogue, the church is following in the footsteps of Jesus, whom the Bible shows as constantly talking, sitting and eating with ‘the other’. What was seen as a scandal by some, was seen by Jesus himself as a faithful way to express God’s will for the world: that all may find life and find it in abundance. Let there be no doubt: a church in dialogue, therefore, is a church faithful to Christ.

A church in dialogue, therefore, is a church faithful to Christ.

As Lutherans worldwide, and as a global communion of 148 churches, such dialogue is never naïve and does not engage with extremist expressions, whether they are secular, ecumenical or interreligious. Extremism, by its very nature, denies the notion of a public space that is inclusive, tolerant and democratic.

But true dialogue serves to break the isolation and support those who stand for the middle ground of moderation and inclusiveness. We must never allow hate speech to undermine our sense of shared belonging and our ability to relate to each other in constructive ways.

What is the best way of effectively confronting hate speech?

We are living in difficult times, with the pandemic continuing to add stress and anxiety to communities already grappling with deep existential questions. These issues are often complex and unsettling. We must reject over-simplifications as we take up the current challenges.

Lutheran theology teaches us not to apply good and evil as labels for people or communities. Instead, it confronts us with the hard but helpful truth that good and evil runs through each one of us, through each community and society. That is probably the most promising starting point for a true dialogue with our neighbors.

We must confront hate speech that promotes violence and demonizes the other. This is a responsibility for all of us. It is all of society that defines the public space, and thereby how people envision living together.

As the LWF, we will continue to promote dialogue and cooperation. We will continue to raise our concerns when public speech and public spaces are degrading, knowing that hate speech opens the floodgates to destructive behavior and actions. We will continue to advocate for a public space that is open to all, where nobody is silenced, bullied or forced to leave. And we will do this out of our conviction of faith, focusing on what God has in mind for this world and contributing, as well as we can, to see this vision transforming our daily lives and realities.

Together, we can do so much
news