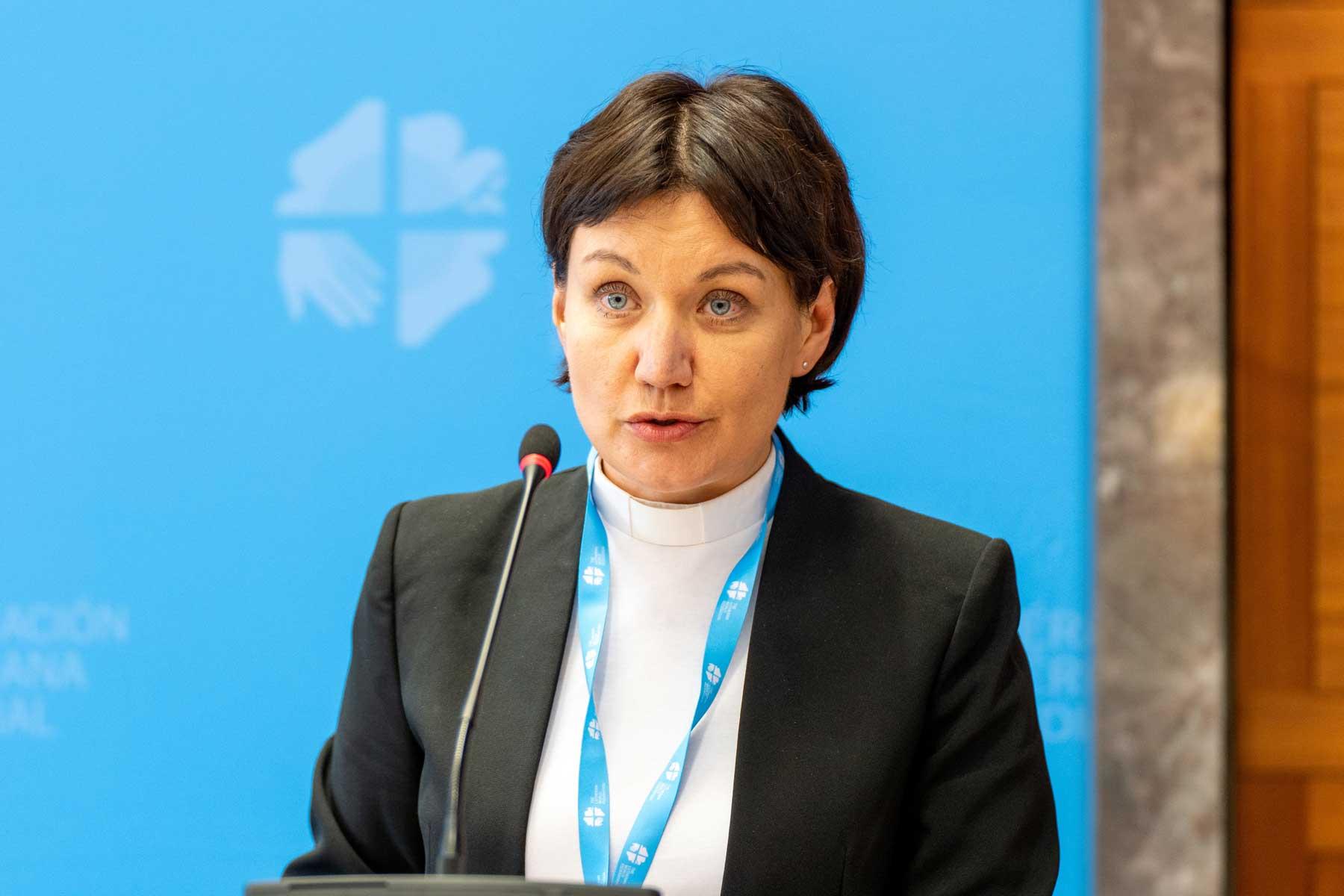 (LWI) - Responding to the conflict in Ukraine while sustaining humanitarian support to survivors of crises in other countries. Preparing for the 2023 Krakow Assembly and strengthening cooperation between member churches in different parts of the globe through the creation of a Communion Solidarity Fund.

These were some of the developments highlighted by the Lutheran World Federation (LWF) General Secretary Rev. Anne Burghardt in her first report to the Council which is meeting in Geneva from 9-14 June. In her keynote address, the LWF leader looked back at challenges of the past year, in particular the COVID-19 pandemic which required her election to take place via online voting.

Despite the many difficulties and restrictions which continue to hamper the work of the churches in some parts of the world, she said, the commitment of Council members to keep the LWF running smoothly is a sign of “sustainability and continuity” as the global communion of churches marks the 75th anniversary of its foundation.

Recalling the four foundational pillars of the organization – “rescue for the needy, joint efforts in theology, shared witness to ecumenical unity and common initiatives in mission” - Burghardt said that the LWF continues to reflect on “how to best ‘translate’ these pillars into the work of the Communion Office and the life of the communion.”

She noted that churches must “carefully discern the spirits” in order to combat “the rise of authoritarian and populist regimes,” as well as “an increase in fundamentalist and other misleading theologies” which offer over-simplistic answers to complex problems. It is particularly dangerous, she insisted, “when theologies and religious identity are radicalized along authoritarian and ethno-nationalist lines and are instrumentalized to promote respective economic and political ends.”

The LWF leader stressed that connecting member churches, in order to strengthen relationships between different countries and regions in a changing global context, is one of the key tasks of the Geneva Communion Office which she said could be described as “a super-connector.”

Reviewing some of the highlights of bilateral and multilateral ecumenical dialogues over the past year, Burghardt underlined the importance of connecting “global to local and local to global in ecumenical relations.” Though not all LWF member churches have a full-time ecumenical officer, she said the creation of an Ecumenical Officers’ Network intends to bring together key players working for Christian unity at national and global levels.

Speaking of developments in the Department of Theology, Mission and Justice, the General Secretary noted that theological education was identified as a priority in most of the LWF’s seven regions during her initial meetings with Council members and advisors in March. Building on a resolution from the Twelfth Assembly, she said the Theological Education and Formation network now “plays a crucial role in facilitating synergies and partnerships across the communion.”

She also highlighted the ongoing Lutheran Identity process, which will culminate at the Thirteenth Assembly, and the “Bible Year” project marking this year’s 500th anniversary of Luther’s ‘September Testament’. These are two key ways in which the LWF is working to deepen the understanding of scripture and the lived experiences of Lutherans in their varied countries and cultural contexts, she said.

The continuing work to support and empower women and young people in the leadership of member churches was also highlighted in Burghardt’s report. She noted in particular the setting up of the new Hélène Ralivao Fund for women in theology and leadership in Africa, as well as the revitalization of the Global Young Reformers Network with its launch of a ‘year of peace for 2022’.

She also highlighted LWF’s commitment to holistic mission, which includes sharing of the gospel, advocating for justice, and serving people in need. All three aspects are integral to the LWF’s programmatic work.

"Timely and rich” theme for the next Assembly

The LWF leader looked back at achievements of the new LWF advocacy hub, Action for Justice, including the publication of its new Advocacy Framework “designed as a tool to guide the Communion’s response to challenges in the world today.” She spoke of the vital work to advance gender justice and climate justice, as well as the LWF’s crucial engagement in interfaith dialogue and cooperation.

Burghardt also highlighted the work of the World Service Department in responding to the needs of some of the world’s most vulnerable people and communities. She recalled how “deeply impressed” she was during her visit to the largest LWF country program in Uganda, while noting the ongoing funding challenges for this work and the increasingly challenging operational environment for humanitarian actors.

The General Secretary spoke of LWF’s multipronged approach to the war in Ukraine, spelling out its coordinated response to the needs of people both inside Ukraine and in neighboring countries. Alongside the rollout of cash assistance and other practical programs, there is a need to offer pastoral care and psychosocial support to people traumatized by the war, she said, adding that LWF is working with its member churches to build their capacity to support refugees. She also pointed to the questions raised by churches relating to peace ethics, just war and other issues regarding “the appeal to Western countries to deliver weapons to Ukraine.”

Finally, Burghardt looked ahead to the Assembly in Krakow, a location which she noted “has gained new significance since the war started in Ukraine” with the consequent arrival of millions of refugees in Poland. The theme of ‘One Body, One Spirit, One Hope’ is both “timely and rich,” she said, “and I invite you to introduce it to your churches and contexts.”