A strong message from Africa’s women 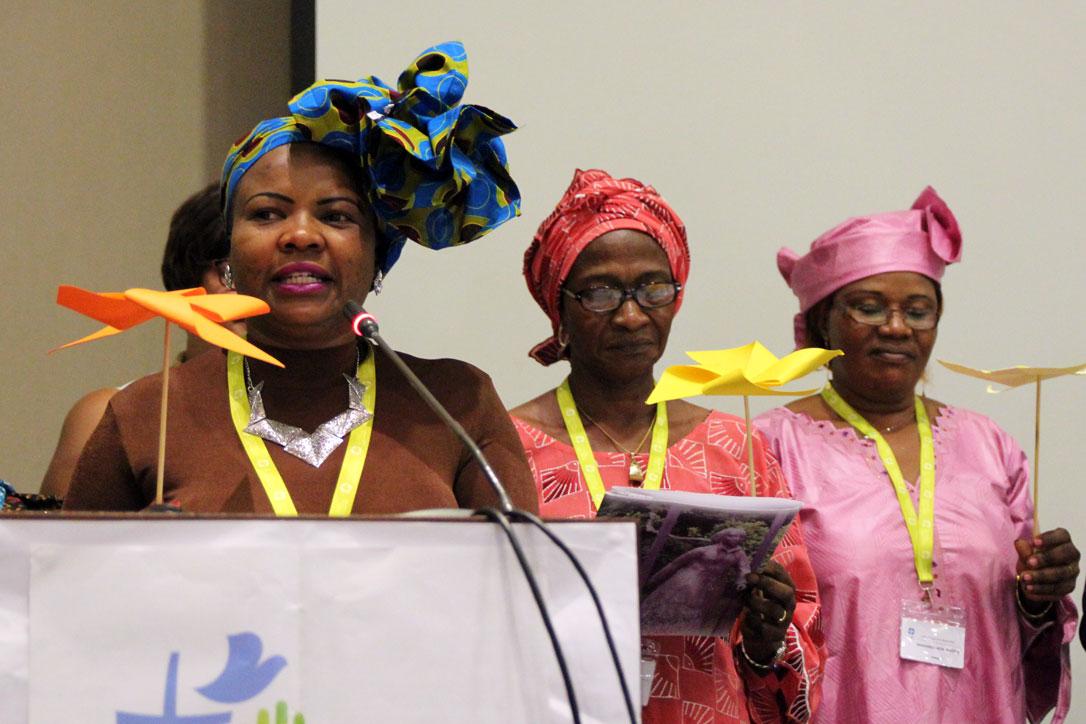 Women on the Move to Windhoek

(LWI) – The Women’s Pre-Meeting held prior to the Africa Pre-Assembly was an opportunity to discover central issues women in Africa are dealing with and to create a space for dialogue, networking and empowerment. It enabled the women delegates to reach into the past  in order to transform the future, all the while exploring the Assembly theme ‘Liberated by God’s grace’ and its subthemes.

Symbolized by the four wings of a windmill, being driven on by the “breath of Reformation”, the women presented their message to the Pre-Assembly. The message centred around  the four main topics they had discussed: women’s leadership, women doing theology, the “Her Stories” project, which relays stories of women in the communion, and the LWF Gender Justice Policy.

“These issues are not women’s, they are church issues,” Colleen Cunningham, member of the steering committee for Women in Church and Society (WICAS), is convinced.

Taking the implementation of LWF Gender Justice Policy to the regional level, the women urged the member churches to make the implementation of the policy a vital priority at all levels. They also appealed to member churches to act as peace builders and to resolve conflicts “to prevent, manage and restore our communities” suffering from violence against women and children, human trafficking, domestic violence and female genital mutilation.

“What is our identity as women in the understanding of the ministry and such concepts as the priesthood of all believers, baptism and the sacraments?” was one of the central questions raised and discussed at the pre-meeting, which was held on 5 February  in Johannesburg, prior to the Africa Pre-Assembly. “We urge member churches in our region, who are still journeying toward the full inclusion and participation of women in the ordained ministry” to conform. “Women’s ministry is a calling and a gift to the church.”

An appreciation for the LWF quota system was expressed. However, a framework of intentional action was needed in the region’s member churches to “ensure 40 percent representation of women in all decision making bodies.”

The women’s message includes an urgent call for churches to no longer rely financial aid from partners that comes with conditions that “compromise, deprive and exclude women.” Instead there a need was identified to support women to obtain theological education and study opportunities, and to provide access to information on scholarships.

By telling the untold stories of women through the “Her Stories” project of the LWF, a new perspective was given to the hidden leadership and valuable contributions made by women in church and society. Her Stories afford men and women an opportunity to “creatively rethink the reformation.”

The presentation ended with the women handing over paper windmills to the male delegates, symbolically sending the “breath of Reformation” out to develop its power. “This is an invitation to join hands on the issue of gender justice,” LWF Secretary for Women in Church and Society Rev. Dr Elaine Neuenfeldt said.

An encouraging and positive Assembly
news