Stop the spiral of violence in Colombia 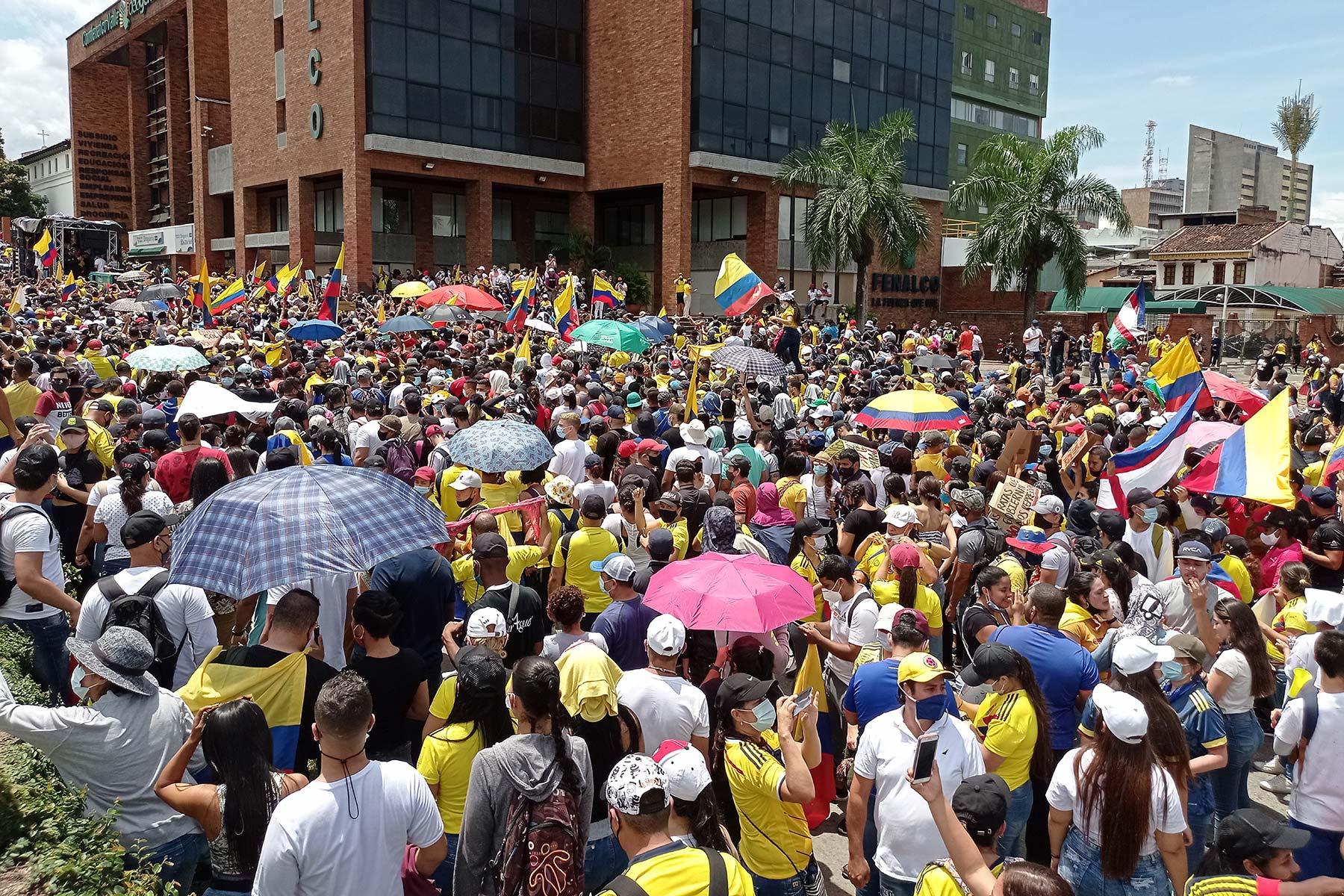 Anti-government protesters in the Colombian city of Cali on 1 May 2021. Photo: Remux / Wikimedia Commons (CC-BY-SA)

(LWI) - The Lutheran World Federation (LWF) has joined with other global Christian communions and ecumenical organizations in an appeal to Colombian President Iván Duque Marquéz to stop the spiral of violence in his country.

In a letter dated 18 May, the international ecumenical organizations, including ACT Alliance, the World Council of Churches, the World Association for Christian Communication, the Council of Latin American Bishops’ Conferences (Catholic Church) and the world communions of Anglican, Methodist and Reformed churches, call on the government of Colombia to “listen to the people’s voices with empathy and without resorting to violence” and to address the root causes of mass street protests in the country.

Over 40 people have been killed, with thousands of others injured and hundreds more missing, as nationwide anti-government demonstrations enter their third week in the South American nation. The signatories of the letter acknowledge the “very complex situation” in Colombia but call for an end to the policy of “repressing popular protests.”

Protests began in opposition to a now-suspended tax reform program, but have since turned into broader demands for an end to university tuition fees, the introduction of a universal basic income and the disbanding of the riot police to protect human rights defenders and indigenous activists. On 4 May the UN’s human rights office denounced Colombia’s security forces for firing on protesters in the south-western city of Cali.

The signatories say they echo the voice of the country’s main ecumenical peace-building platform DiPaz in calling for the demilitarization of the government’s response. Citing a 3 May DiPaz statement, they express solidarity with all the “victims of human rights violations in the midst of police repression” and urge the government to comply “with the norms of International Humanitarian Law and Human Rights.”

In particular, the letter calls on the government to end “the disproportionate use of force” and to create “safe and transparent dialogue and negotiation spaces with diverse sectors of society,” prioritizing “local voices” and including observers “such as faith actors who can provide an element of impartiality.” It also urges an end to the stigmatization of protesters, especially the youth and members of the indigenous ‘Minga’ movement.

We believe that as head of government, you will call the Colombian authorities to remember and fulfill their primary responsibility which is the protection of the Colombian people.

The signatories of the letter call on the government to prosecute those responsible for the recent deaths, injuries, or disappearances and to implement the terms of the 2016 Final Peace Agreement which marked an end to the country’s long-running civil war. Earlier in May, the Evangelical Lutheran Church of Colombia (IELCO) also expressed “deep concern” over the unfolding violence and urged the government to respond to the calls for greater economic justice.

The letter reminds President Duque of his “obligations” under international law, as well as his “moral duty as a Christian.” They conclude: “We believe that as head of government, you will call the Colombian authorities to remember and fulfil their primary responsibility which is the protection of the Colombian people.”