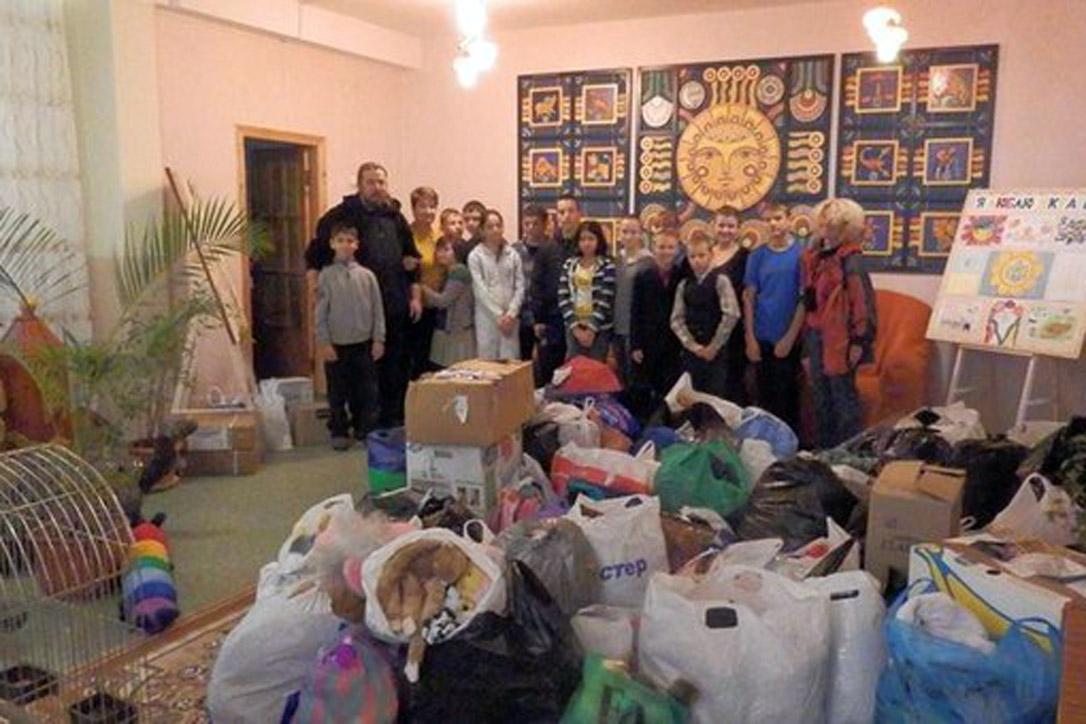 Humanitarian aid is collected for children in Donbas area, one of the worst affected of the Ukraine conflict. Photo: Janka AdameovÃ¡

Assistance to the displaced and people with disabilities

(LWI) – In the midst of the 16-month-old war in the Ukraine that has killed over 6000 people and displaced 1.5 million, the German Evangelical Lutheran Church in the Ukraine (GELCU) and the Living Hope diaconal organization continue to respond to the overwhelming needs of people affected by the conflict.

Members of a solidarity group of diaconal actors from the Lutheran World Federation (LWF) member churches in Europe visiting GELCU recently witnessed the church’s diaconal work in the conflict between the Ukrainian government forces and pro-Russian separatists who are supported by Russia and seek control of the country's eastern region.

Waves of displaced people are seeking new homes in dilapidated towns, the four-person solidarity group reported on their 20-22 May visit hosted by GELCU Bishop Serge Maschewski and Nicole Borisuk of Living Hope. Water and electricity are scarce and the battle scarred infrastructure remains one of the biggest obstacles to bringing food and other basic needs to towns in the Donbass region, one of the worst affected.

In Odessa alone, the group noted, there are 20,000 officially registered displaced people though unofficial estimates suggest the numbers could be as high as 300,000 in the region of around 1 million inhabitants.

They noted that people who are already vulnerable in society face particular difficulties as they try to find their place in the war-torn society. The report cites the situation of 1500 people with disabilities who had been evacuated from Donbass to former sanatoria or recreation homes near Odessa but are now threatened with eviction by the local authorities.

The diaconal workers noted that soldiers returning from the war suffer from physical and mental injuries, have difficulty re-integrating into family life and frequently turn to alcohol and are physically abusive. Diaconal support in such cases includes pastoral care.

GELCU and Living Hope extend such care to the general population, with many people suffering from depression in the midst of the war and deprivation. While some stay in dangerous situations because they feel attached to the land, others suffer the frustration of looking forward to potential political change. A group of 46 psychologists supported by the diaconal center in Odessa provide counseling on a voluntary basis, including in congregations where groups of displaced people have settled. Since April 2015 the church diaconal center has also established an SOS-telephone line to facilitate ready access to such help. In Odessa alone, more than 1800 people who mostly suffer post-traumatic stress syndrome have been assisted.

As families are split on the value of the war, diaconal workers in light of the current situation urge the nurturing of solidarity, something the congregation in Dnepropetrovsk in the Donbass region is encouraging.

Still, the group noted, out of this chaos of war, a kibbutz has risen - an agricultural enterprise with land, cows, chicken, goats and ducks that brings together 100 people in a former factory recreation center. It is organized by the pentecostal church, The Good Samaritan.

“This new future life is shaped by investing in the resources of the inhabitants themselves. Each of them, based on their gifts, creates employment possibilities. The fruits of participatory approaches for living together have already been experienced,” the solidarity group noted.

The group emphasized the urgent need for long-term peace building in the Ukraine. “Mutual understanding and tolerance should be the basis for creating new relations between the people,” the group stated in its report.

The solidarity group visit to Ukraine was part of the “Seeking Conviviality” initiative by the LWF member churches and diaconal organizations in the European region. The “conviviality” model of diakonia emphasizes social service work that includes participation by the people affected so they can bring about their own change.

“In this light, the implications of the concept of conviviality seem to be legitimate. Peace-making as a concept is becoming more and more important for all age groups and diverse target groups,” the group concluded.