Silence not an option against populism 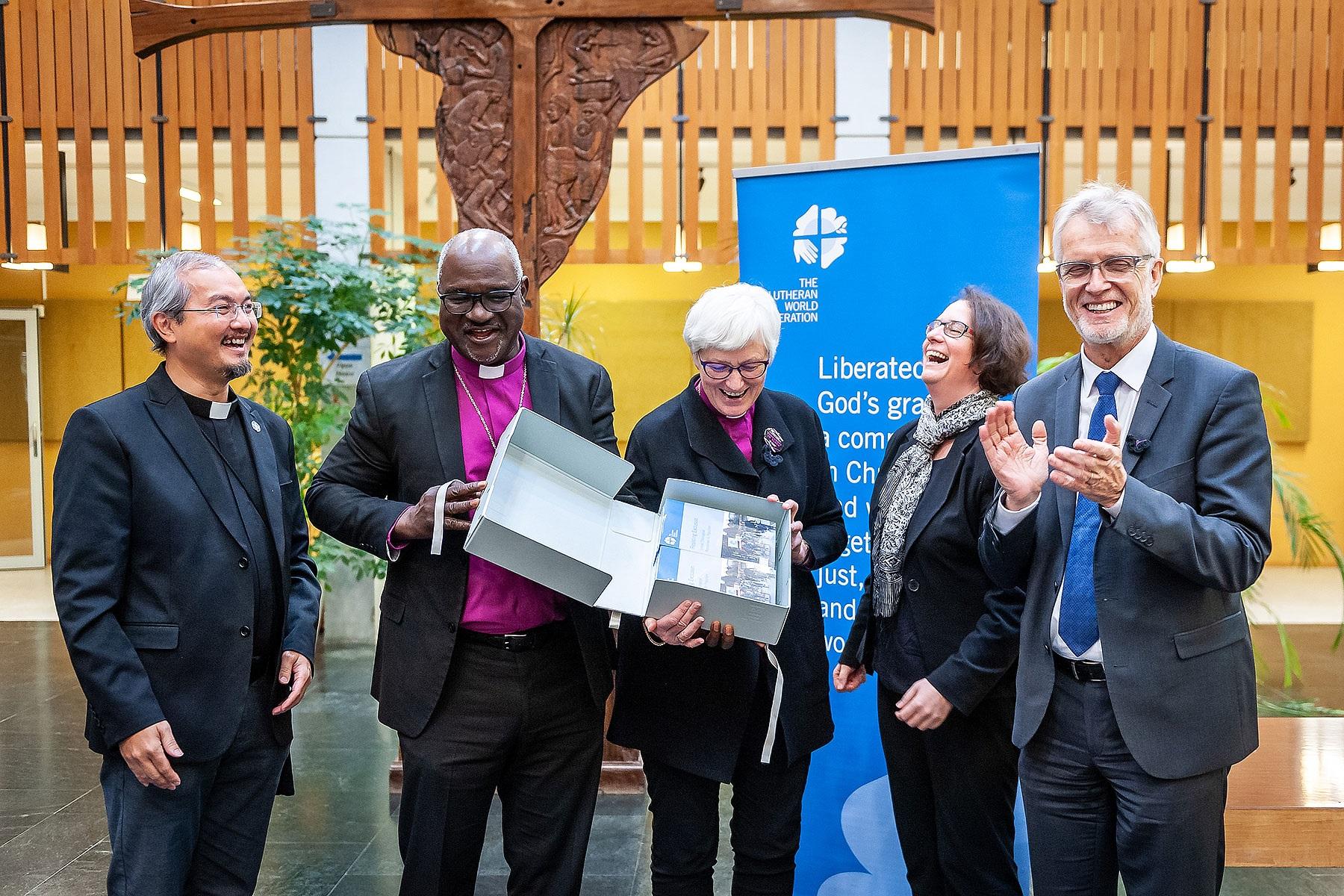 (LWI) – Silence is not an option for church leaders and other faith actors in the face of exclusionary politics and policies that threaten to fragment society and weaken democracy around the world.

This was a key message during the launch of the latest publication of The Lutheran World Federation (LWF), Resisting Exclusion – Global Theological Responses to Populism. LWF President Archbishop Dr Panti Filibus Musa and Vice-President, Archbishop Dr Antje Jackelén unveiled the book at an event, 21 November, attended by members of the Executive Committee among other invited guests.

In her introductory remarks, Jackelén, who is one of the contributors to the book, reflected on 4Ps that she elaborates under the topic "Responsible Church Leadership in the Face of Polarization, Populism, Protectionism and Post-truth." Adding “patriarchy” as the fifth component, the Nordic region vice-president and head of the Church of Sweden called on churches to counter the 5Ps with a new narrative of hope and participation, including the courage to speak, pray and act.

“It is not about what we can change next, but about realizing the deep sense of being transformed, of being steeped in the spirit of the gospel.”

Lutherans, she noted, are called to be good stewards of tradition while at the same time focusing on transforming the church which is “always in need of being reformed,” (semper reformanda). “It is not about what we can change next but about realizing the deep sense of being transformed, of being steeped in the spirit of the gospel.”

Referring to the LWF study document, The Church in the Public Space, The Swedish archbishop emphasized the need to strengthen awareness about the church as a global body with the role of fostering participation, building relationships of trust, challenging injustice; discovering signs of hope and empowering people in need. Partnerships with other faith or secular actors are also critical. “It is not easy to be resilient when you are alone; it is much easier to resist when you know that you are supported both by prayer but also in deed,” she added.

In his remarks, the LWF president said being church in today’s challenging times “requires church leaders who are both confident and courageous to stand up against any kind of propaganda that scapegoats foreigners and even worse demonizes them without any regard for their humanity.”

Musa noted that constant conversion and renewal of the church demands taking responsibility for weaknesses and inadequacies rather than apportioning blame on others. In the endeavor to speak out for justice and hope, he said, “as people of faith who value truth and trust, we are not called to merely shout and make noise to gain attention. Rather, as leaders of the church, we are called to speak truth that is able to withstand critical scrutiny.”

The leader of the Lutheran Church of Christ in Nigeria expressed appreciation for the focus on contexts where Christians struggle to speak in the public space because of religious rhetoric and misappropriation of other faith traditions. He expressed his hope that the new LWF publication would contribute to energizing a movement of religious leaders to raise their voices “against the many forces that aim to inflict harm on society for their own self-interests and self-gain.”

The event concluded with a liturgical intercessory prayer emphasizing the participation of people in the public space.

Videos: Reflections on the role of churches in the face of growing populism