Seeking wisdom to listen to creation and learn from it 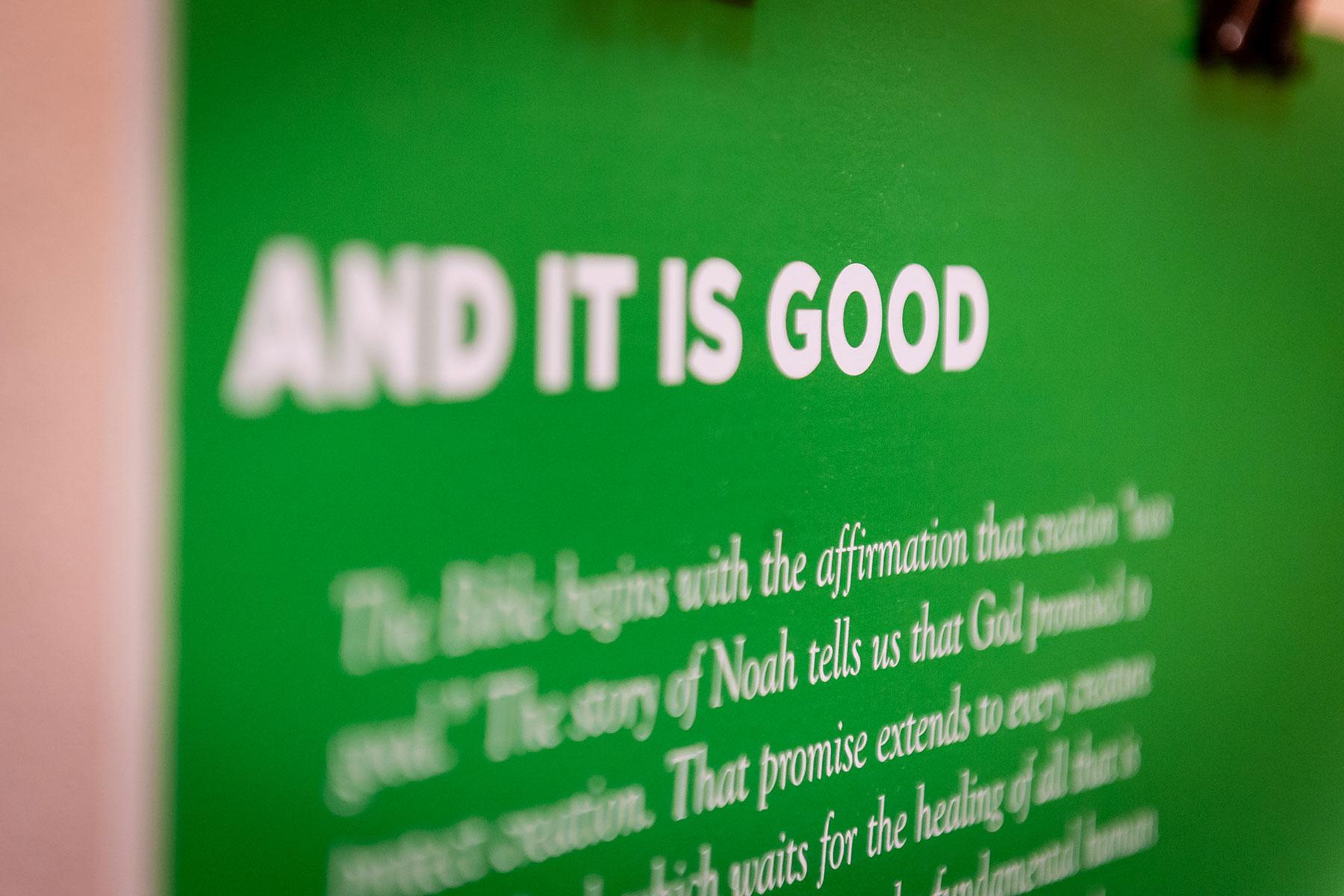 One of the panels of the âAnd It Is Goodâ photo exhibition. Photo: LWF/S. Gallay

(LWI) - An online prayer that was among events around the world marking the end of the Season of Creation 2019 campaign on biodiversity and the web of life is now available.

The Lutheran World Federation (LWF) co-hosted the gathering, which brought together more than 100 participants from all world regions and Christian traditions. The annual ecumenical campaign begins on 1 September and ends on 4 October, with emphasis on Christian responsibility to care for God’s creation.

Prayer leaders and others joining online prayed that human beings would have the wisdom to listen to creation, learn from it and live together in harmony “in our common home.”

The petitions highlighted a wide range of concerns including protection of North America’s Appalachian mountain tops, Africa’s drying Sahel and Brazil’s Amazonian regions, and for the oceans and waters. Participants also prayed for “volunteers who give their time and energy to work toward change across the world” and that political leaders especially those representing “first world countries, respond collaboratively and generously to the climate crisis.” Theology students from Faculdades EST in Brazil wrote a prayer from Amazonia, that gave thanks for the diversity of the rainforests, and prayed for responsible protection of flora, fauna and indigenous peoples.

The prayers from every region of the globe demonstrated the knowledge and love for creatures that our members live with, see and care for every day.

“The prayers from every region of the globe demonstrated the knowledge and love for creatures that our members live with, see and care for every day,” says Rev. Dr Chad Rimmer, who moderated the event. In his petition, the LWF Program Executive for Theology and the Church, called for enlightenment to “appreciate the delicate balance maintained by each creature” and inspiration “to conserve the precious habitats that nurture this web of life.”

In his sacred teaching, Canadian Archbishop Mark MacDonald, noted that Jesus in his teachings “deliberately talks about the wisdom of the rest of creation and how God’s teachings and laws are encoded in our relationships and observations of the other creatures in creation.”

MacDonald, the first National Indigenous archbishop of the Anglican Church of Canada called for a return to the original sources of wisdom and truth that advocate a relationship with the land and its creatures.

“I would like to advocate that we are being called to a sacramental and eucharistic relationship with the land. Instead of exploiting the land, we are called to offer up the land at our most sacred ceremony in the gifts of the bread and the cup.”

Rimmer expressed gratitude for the archbishop’s invitation to “consider the sources of wisdom that are in our faith traditions, reminding us that as creatures, we are part of creation that cares for us.”

The online prayer also featured the photo exhibition on the Bible and biodiversity called “And It Is Good,” prepared by the LWF in partnership with ACT Alliance, World Communion of Reformed Churches and the World Council of Churches. The display will travel to the Chilean capital, Santiago de Chile, for the 2-13 December United Nations climate conference or COP 25.

Rimmer described the exhibition “as an icon of the Season of Creation that will be present in the COP gathering, to invite our global policy makers to contemplate the importance of safeguarding conditions for the diversity of life to flourish.”

A delegation of young people represents the LWF at the annual sessions of the Conference of the Parties (COP) to the UN Framework Convention on Climate Change.