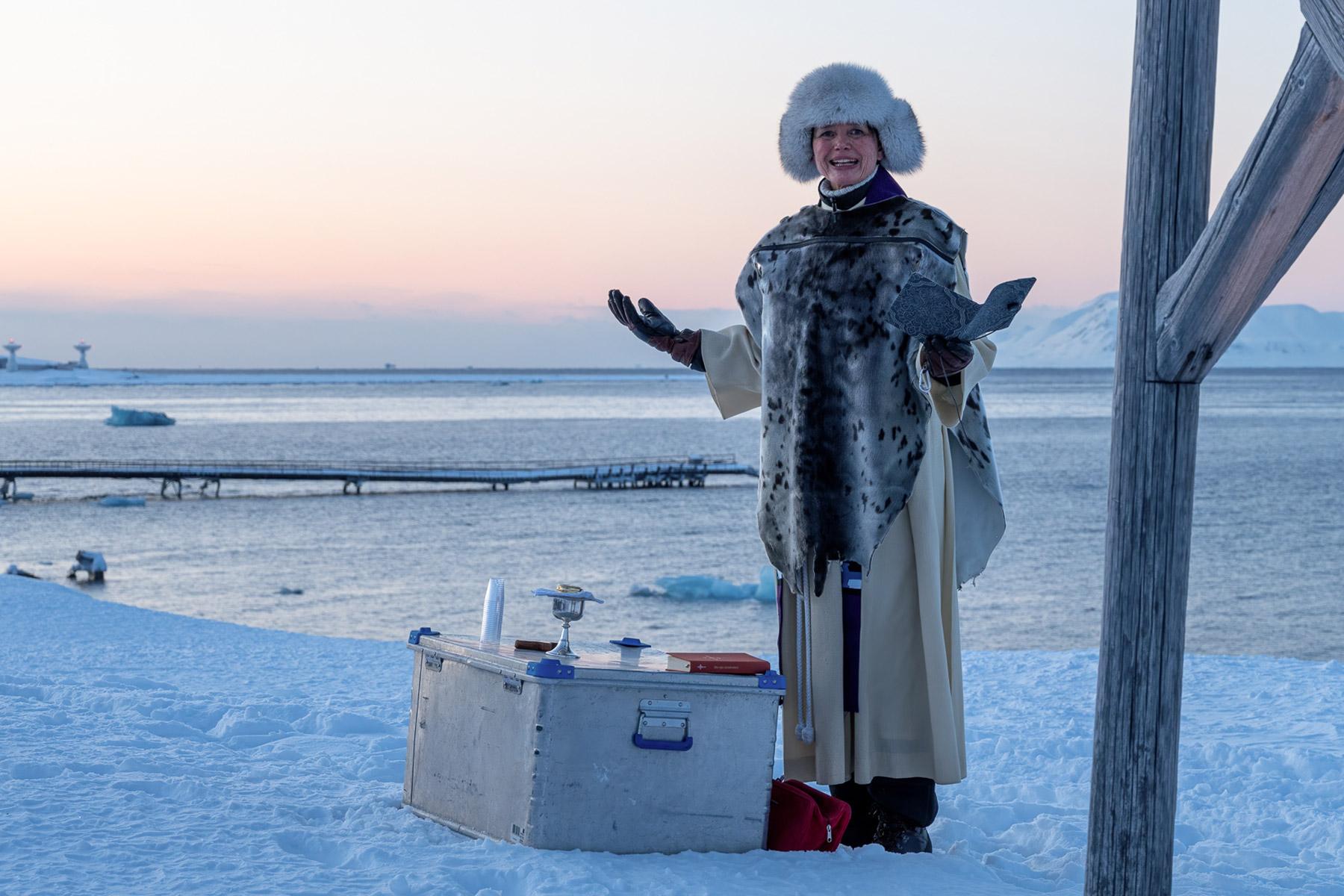 Voices from the Communion: Rev. Siv Limstrand shares reflections from a community living on top of the world

(LWI) - Living literally “on top of the world”, in the icy Svalbard archipelago not far from the North Pole, Rev. Siv Limstrand of the Church of Norway ministers to a constantly shifting congregation currently made up of 52 nationalities. She is the only pastor in the remote Arctic region, where temperatures rise above freezing for just a few months each summer, although climate change is visibly altering the environment and bringing new challenges for its population of around 3,000 souls.

The main town of Longyearbyen was established in 1906 as a coal mining hub, but in 2023 the last mine will close, radically altering the identity of this close-knit community. Though the tourist industry is growing and the university center specialized in Arctic research is flourishing, there is a palpable sense of sadness and insecurity at the loss of traditional livelihoods.

Three years into her ministry in this polar region, Rev. Limstrand reflects on “the gifts and challenges of building bridges” between people of diverse backgrounds, helping them “to recognize what they have left behind and what they are searching for” in this harsh, but beautiful environment.

Tell us first a bit about your vocation and journey to ordination?

As a teenager, I was involved in youth work with the Norwegian church, which led me into theological studies at Oslo University. I grew up in Bodø in the north of Norway, which had a more open-minded approach to religion than the attitudes I discovered on the west coast in Trondheim where I worked as a volunteer.

My parents came from mainly fishing or farming families and my father was the first in his family to have a university education. His father was a very devout Christian and they both had quite traditional upbringings, but were very supportive of my decision, in the early 1980s, to train for ordained ministry. I felt I could make a difference, as I tried to navigate the challenging questions about identity and belonging to the church in these very different cultural contexts.

After university you worked with the LWF in Geneva, didn’t you?

Yes, I started in part-time jobs with the Norwegian YWCA-YMCA, working on issues like solidarity with South Africa and Palestine. Then I was offered the post of Executive Secretary for Youth with the LWF, which I did from 1991 to 1994. After that, I spent eleven years as a university chaplain and then moved to Trondheim’s City Mission to help build a resource center for people affected by HIV and AIDS. After five years there, I became a street pastor in charge of the medieval Vår Frue church which offers shelter and community to the needy and homeless.

I did a lot of work on HIV and AIDS, both in practical ministry but also asking how the church could respond in more adequate ways. This work with the city’s most vulnerable, the homeless, the beggars, those struggling with drugs and alcohol abuse, changed the understanding of what the church is as a place of shelter for those who are not welcome elsewhere. This reshaping of the church’s identity inspired other congregations in Norway and beyond. It was a huge challenge for me, mentally, theologically, spiritually, but also a daily blessing to be there at the core of the Gospel. 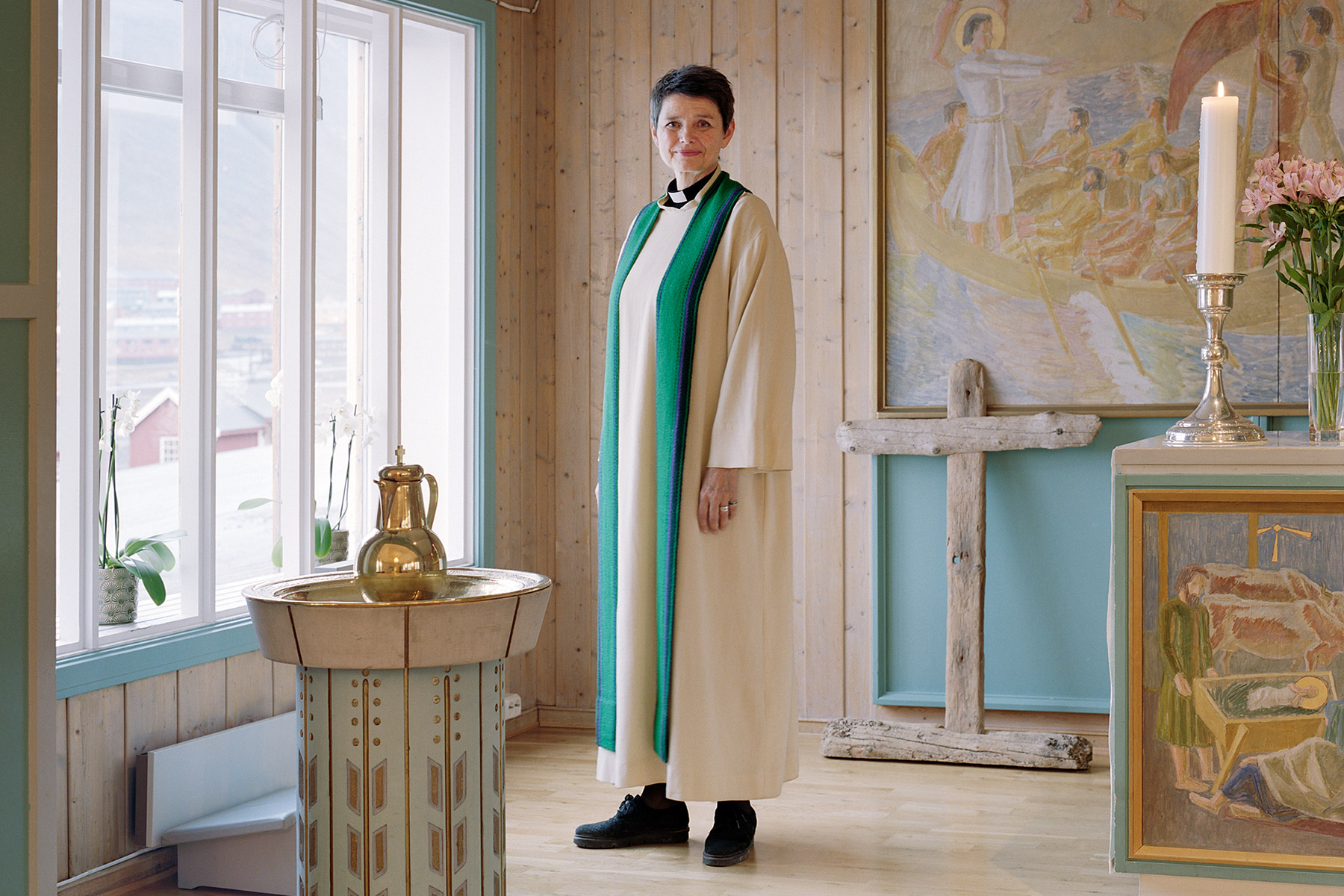 Rev. Siv Limstrand in the church at Longyearbyen, close to the North Pole, where she now ministers to the community on Svalbard’s Arctic archipelago.

Tell us about the town of Longyearbyen and the work you do now?

This is the place where everything else I have done comes together. Here we are really living on top of the world, which makes us feel somehow connected, even though it is a thousand kilometers to the next town on the mainland! Working in Geneva with youth from all corners of the globe, I felt I had the whole world on my desk every day. Here I try to see the world in each person, helping them to figure out where they have come from and what they are looking for.

All of us have left families and friends behind in other places: it is both a gift and a challenge to be here as the church, serving as a bridge and a shelter for people searching for different things in their lives. We share our church and serve people from other denominations too: three times a year a Catholic priest comes here and in normal circumstances a Russian Orthodox one too. The Church of Norway has currently cut ties with the Russian Orthodox, but we have to find ways of living together, regardless of what is happening in Russia and Ukraine.

What are the biggest challenges of living and working in such a remote place?

We work on what we call ‘Svalbard time’ which is an excuse that people sometimes use for not finishing anything on time! But the reality is that everything we need has to be brought by plane or boat, which is a three-day trip and it only comes every ten days.

Also, everything here is highly political: this is Norwegian territory, but the Svalbard Treaty makes clear that we are exercising sovereignty on behalf of the world community. There are many difficult questions, especially with the war in Ukraine, about whether it is right to close the last mine until we can ensure ways of producing enough electricity or other sources like solar and hydrogen power. In the meantime, there is a mourning process as traditional livelihoods disappear. 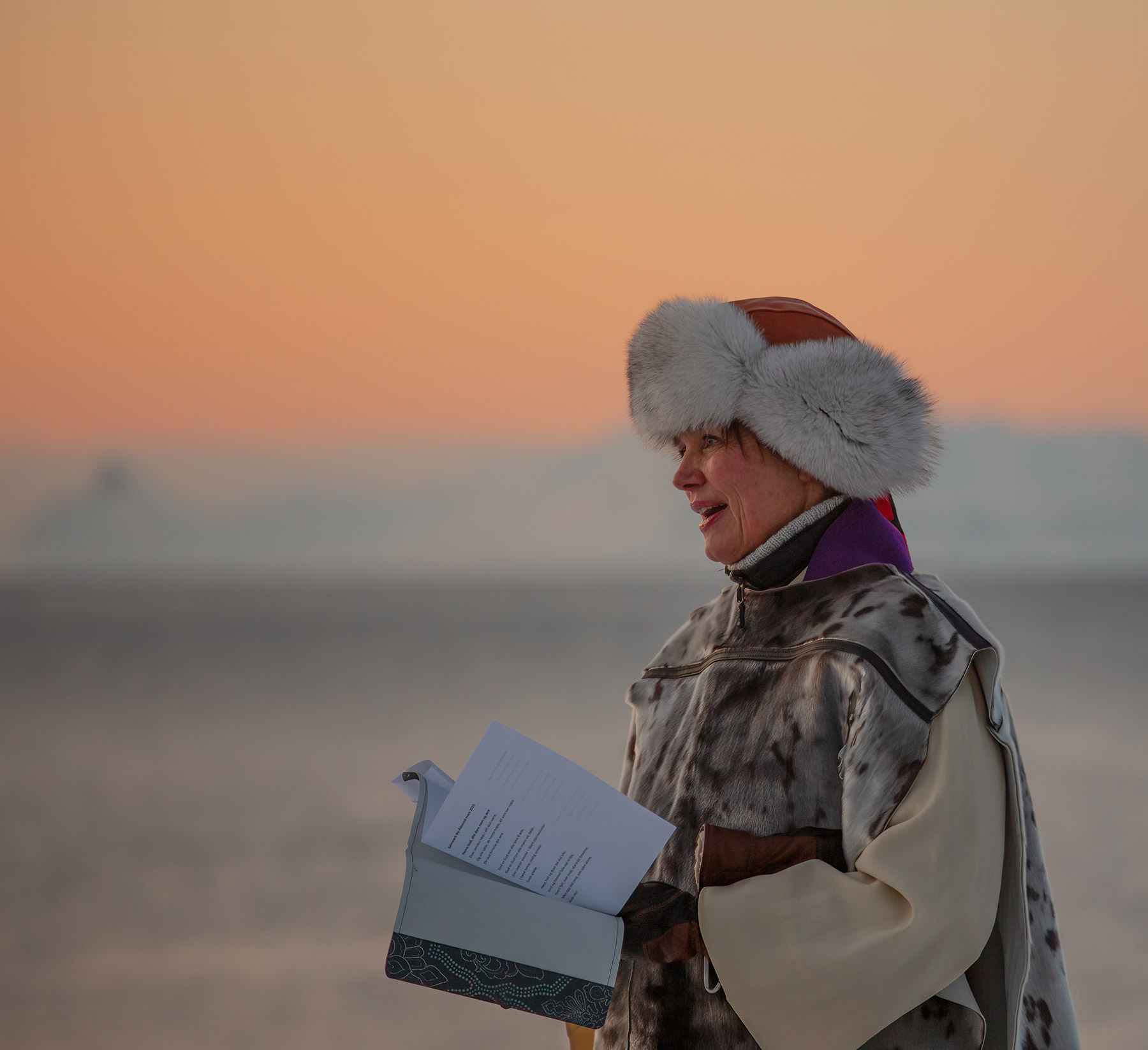 How is climate change affecting the lives of people in Svalbard?

Temperatures are increasing here at twice the speed of the rest of the world. We can see this in the melting glaciers and substantial changes to vegetation, as well as the loss of polar bears and other wildlife. The weather is wetter and milder, with more avalanches and landslides.

Homes used to be safe spaces, a haven from the cold. But in 2015, a man and a young child died in an avalanche while sleeping in their home and many houses were damaged. The authorities have been building fences and other security measures, as well as building houses in safer areas. But you can no longer travel by snowmobile on most fjords like they did in the past because of the loss of sea ice, so we are reminded daily of this problem.

What does it mean for you and the people of Svalbard to be a part of the Lutheran World Federation?

Most people here would have no idea about the LWF, but I often speak about the global communion of churches. I remind people that every child I baptize is being welcomed into a wider church family which is the Body of Christ. Since the first pastor built a church and set up a school here in the 1920s, our ministry has always been closely connected to the needs of this community.

But being uprooted from families, having to make new friends, this opens up something valuable as people learn to live with each other. My task is to nurture that and to help people explore the spiritual and existential side of life here. 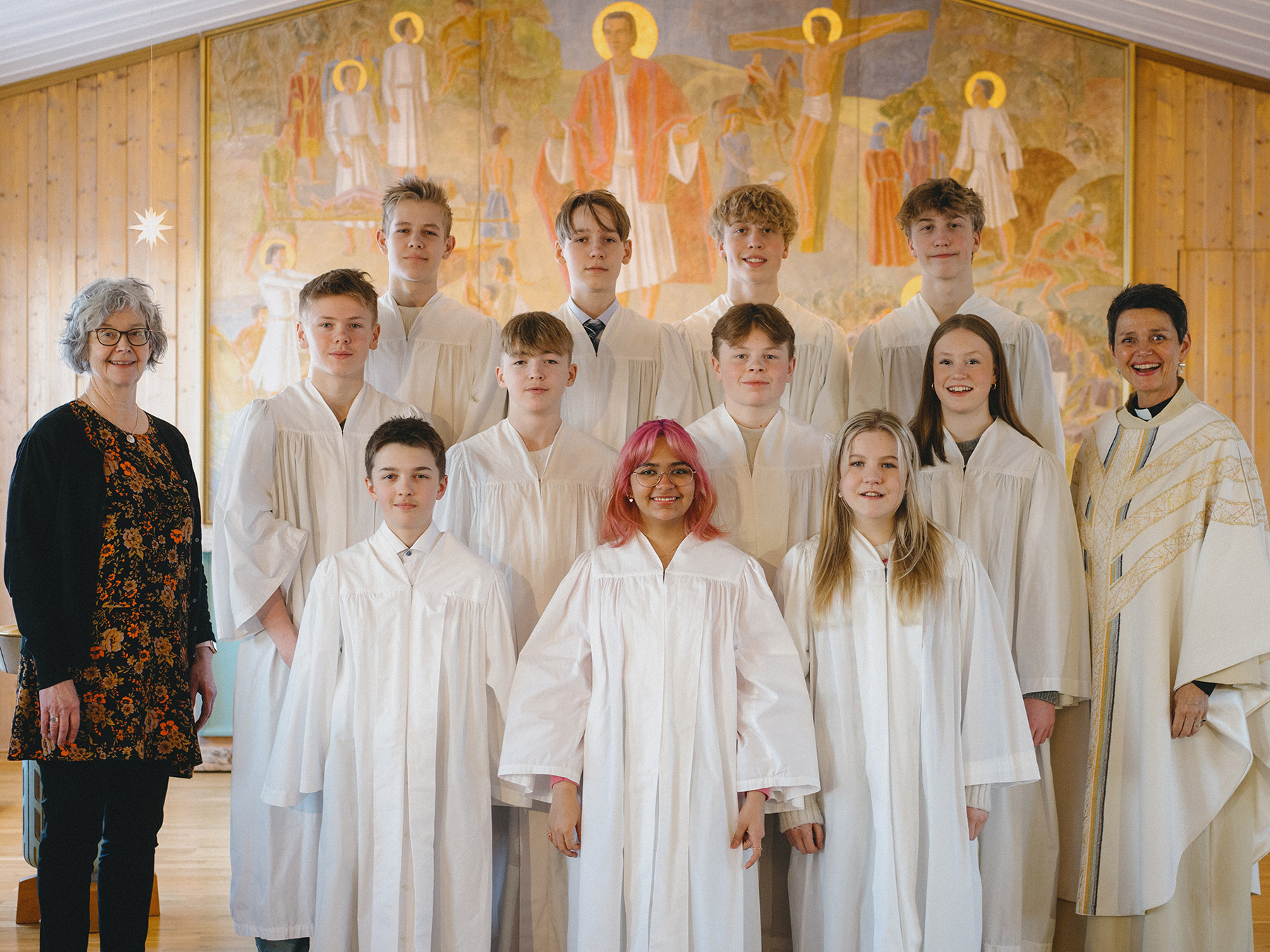 USA: “We are connected to a larger, growing Lutheran family”
news