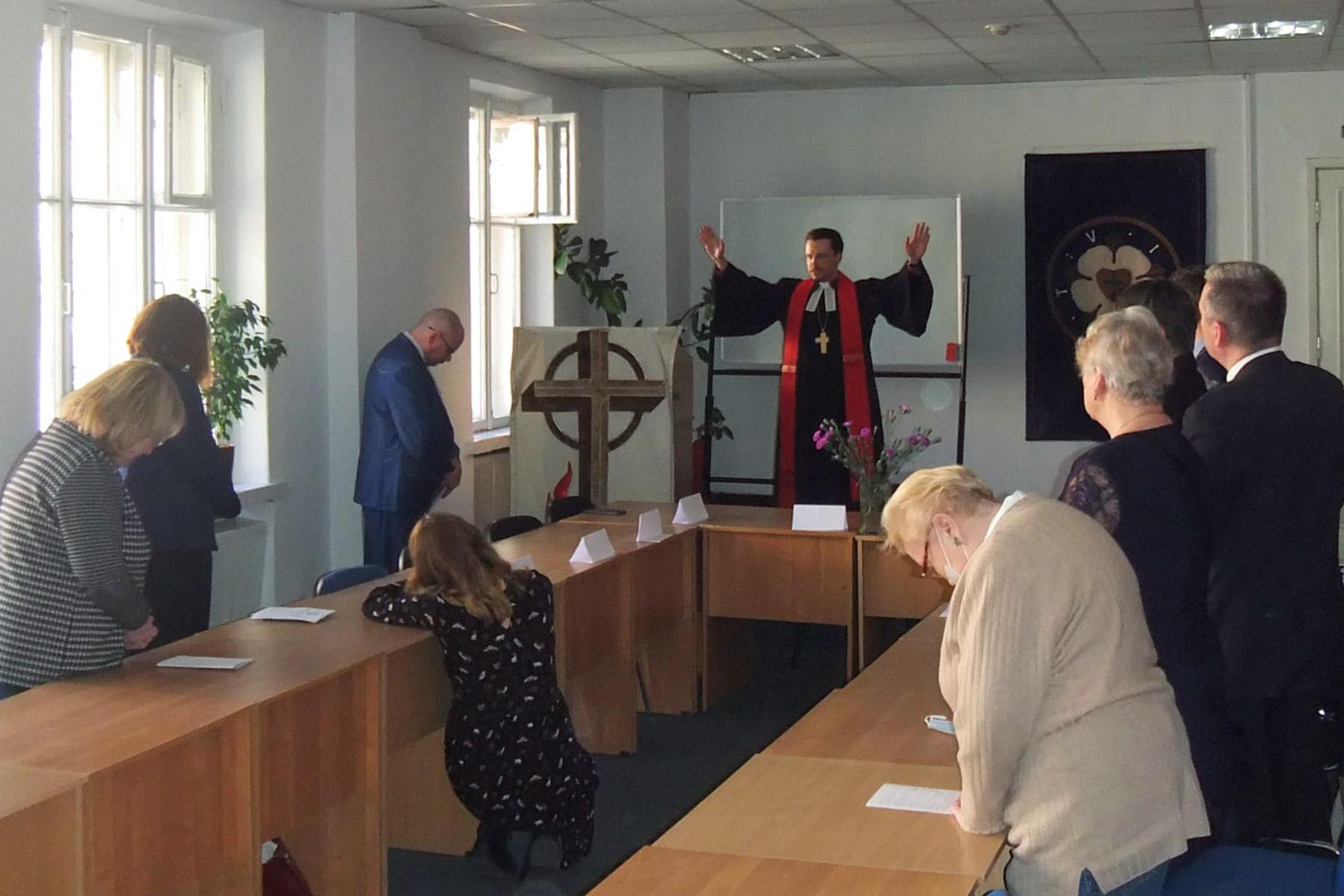 Blessing by the Archbishop of the Evangelical Lutheran Church of Russia, Dietrich Brauer, at the inauguration of the new rooms of the Theological Seminary. Photo: ELCR

Distance learning for men and women throughout Eastern Europe

(LWI) - On April 18, in St. Petersburg, Russia, the Theological Seminary of the Evangelical Lutheran Church officially entered a new phase. The seminary’s new facilities were inaugurated at the St. Peter and Paul Church Center by the Archbishop of the Evangelical Lutheran Church of Russia (ELCR), Dietrich Brauer. The seminary conducts its study and training programs primarily through distance learning.

“Our students don’t come from Russia only, but also Georgia, Kazakhstan, and Ukraine,” explains the rector of the training center, Rev. Dr. Anton Tikhomirov. Currently, there are about thirty men and women doing the four-year university course. Twice a year, they gather in St. Petersburg for face-to-face seminars together with other interested people. A team of four academics leads the sessions.

“In addition, we offer up to ten short seminars a year in the churches in various regions,” Tikhomirov said. “Before the COVID-19 pandemic, each of these courses was attended by ten to fifteen people.”

Before moving to the church center at St. Peter’s Church, the seminary was based in buildings in Novosaratovka, a village outside St. Petersburg. But “in 2013 it became clear that classical study courses were no longer possible,” Tikhomirov reports. It was decided to offer distance learning courses only. In addition, short training courses are offered regularly. “This concept has proved successful,” Tikhomirov is pleased to say. “In the first new cohort, about seventy people enrolled for study courses.”

The transition to distance learning also meant that the seminary no longer needed its buildings in Novosaratovka. A decision was made to move the seminary to the center of St. Petersburg in 2019. This move is now completed.

Theological higher education for Lutheran clergy in the Eastern European region has a turbulent history. “Even though the seminaries and academies of the Orthodox Church enjoyed much greater prominence, there was a theological faculty in the then Russian Empire at the renowned University of Dorpat - now Tartu in Estonia - as early as the 19th century,” says Tikhomirov. “Protestant theology was taught in German. Most of the pastors of the Protestant Church in the Russian Empire were trained there.”

Only after the fall of communism did it become possible again to focus on training pastors. “Bishop Haralds Kalnins and then Bishop - later Archbishop - Georg Kretschmar organized courses for women and men in the preaching ministry in the early 1990s,” Tikhomirov recalls.

In 1993, the church bought back the land and building of the former Lutheran church in Novosaratovka, and in 1997 the seminary was opened for classes there.

“Many questions remain,” Tikhomirov says. “But the move to St. Petersburg opens up new opportunities for us.” These include developing cooperative models with Russian educational institutions such as the Catholic Seminary, and the Baptist University in St. Petersburg, as well as with institutions abroad, such as “our good friends in Budapest, Riga, and Tallinn.”