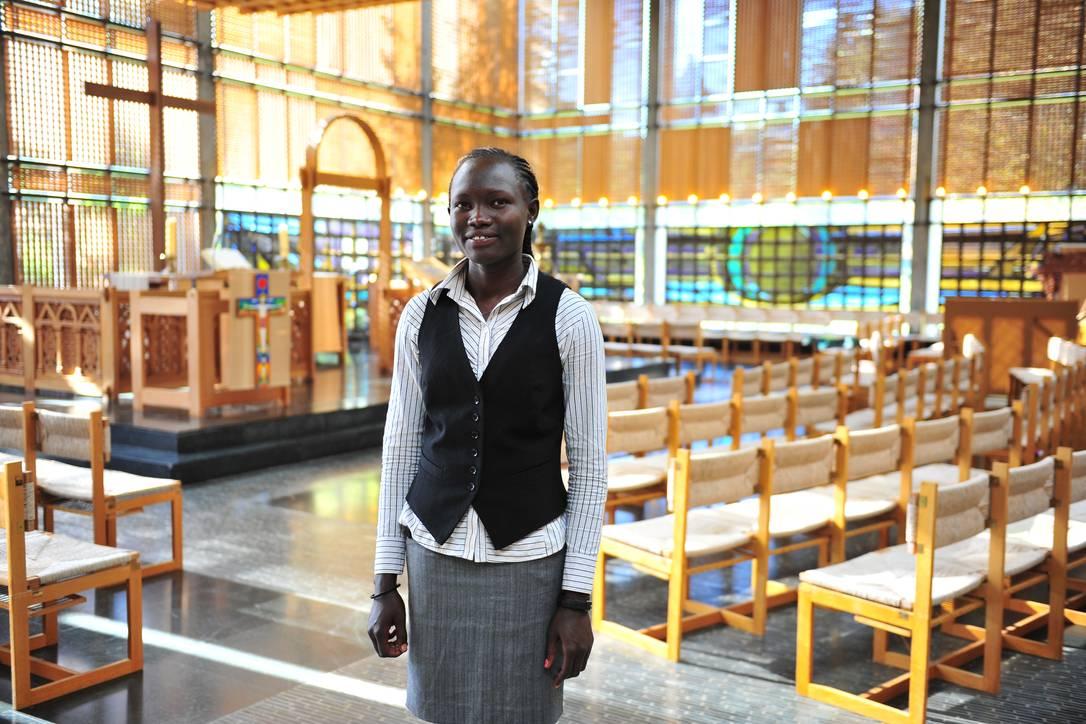 Rose Nathike Lokonyen in the chapel of the Ecumenical Center, where the LWF is based. Lokonyen will be one of the speakers at MalmÃ¶ arena. Photo: LWF/M. Renaux

Refugee athlete to give testimony at Ecumenical Commemoration

(LWI) – Olympic athlete and refugee Rose Nathike Lokonyen will be one of the speakers at the Joint Lutheran-Catholic Commemoration in Sweden on 31 October.

At Malmö arena, four people will offer testimonies. One of them is Rose Nathike Lokonyen, a 23-year-old refugee from South Sudan. Rose and her family fled to the Kakuma refugee camp in Kenya when she was eight. Since the age of 14, she has been the head of household for five younger siblings.

From camp to standing ovation

Rose managed to take care of her siblings and finish her education in a school run by the LWF. She became an incentive worker for the LWF, motivating girls to go back to schools and raising awareness on early marriage, HIV and rape – all issues many refugee girls are confronted with. In her little spare time she had, she played soccer.

Her skill as a goalkeeper in the camp was so sought after that even the host community asked her to play for their team in the frequent matches between the “Kakuma football league” players and the surrounding host villages. Last year, her team went to Nairobi and beat a Kenyan team 4:1. “I just held all the penalties,” she smiles.

We are people like everyone else. We can do anything, and I want to show what we are capable of.

This year, Lokonyen became famous as one of five South Sudanese runners on the refugee team in the Olympic Games in Rio de Janeiro. She was carrying the Olympic flag when the team entered the Maracana stadium to applause and standing ovations.

A great moment, she says, and an opportunity to give a face to the 65 million forcibly displaced people worldwide. “We are people like everyone else. We can do anything, and I want to show what we are capable of,” she says.

Importance of sports and education

On 29 September, Lokonyen visited the LWF headquarters in Geneva and met LWF staff, among them the directors of the 21 LWF operations in 26 countries, including South Sudan, where she comes from, and Kenya, which she now calls home.

“LWF was part of Rose’s life since she came to Kakuma. This summer, we have followed every social media post about her, we have been cheering for her and watched every race. She is a testimony to the strength and resilience of the people we work with,” says Maria Immonen, the Director of LWF World Service.

“Her example shows how important it is to not only provide food and shelter, but also cultural activities, sports and education to displaced people,” Immonen adds. “We are very proud and honored that she will give a face to the work of LWF World Service in Malmö.”