The ‘Reformer Today’ is about the church’s future 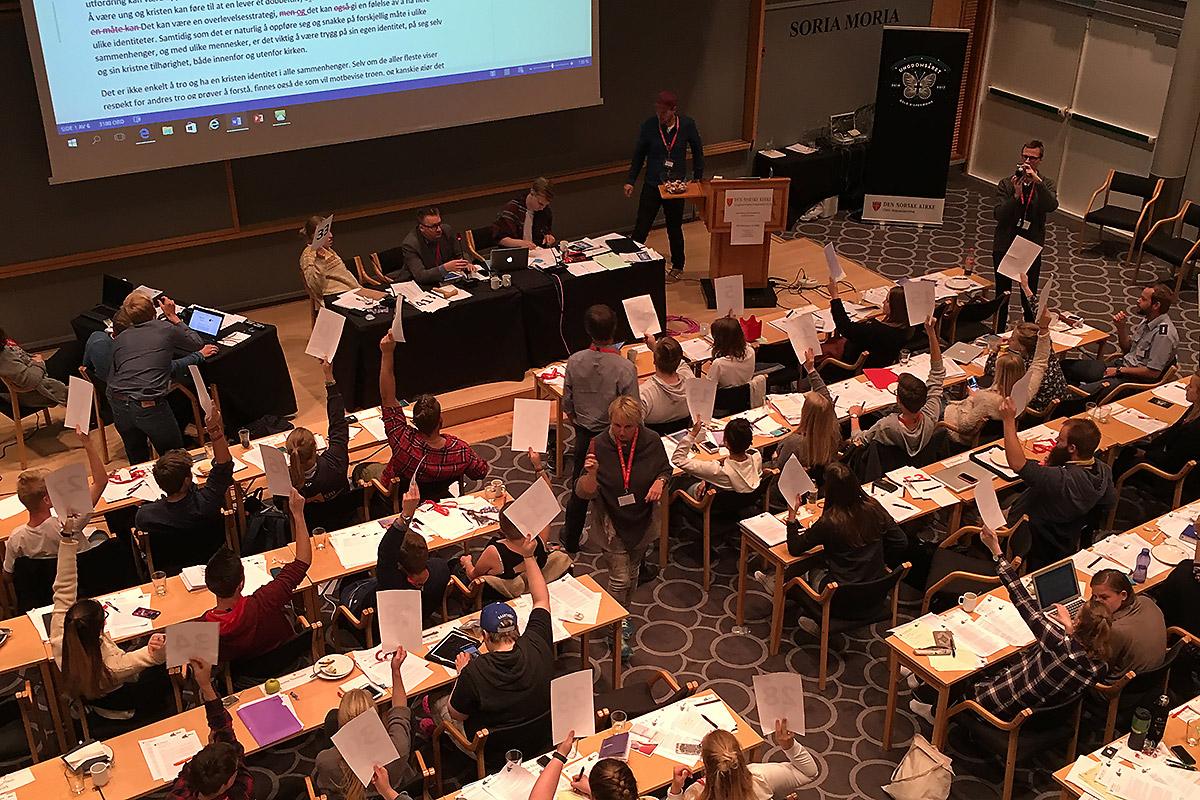 Delegates at the Church of Norway youth synod where the Young Reformers presented their initiative about young people's involvement in the church. Photo: Church of Norway

(LWI) - Youth in the Church of Norway have initiated nation-wide conversations on the ongoing reformation of the church and the changing role of its young people, calling for space to talk about faith and taking up more responsibility.

Young Reformers and theology students Andreas A. Fosby and Ingvild B. Lalim worked with a team of 100 volunteers across the country to organize a national Reformation Jubilee and produce a document called Reformer Today, which gained national media coverage. The efforts are part of youth contribution to commemorating 500 years of the Reformation in 2017.

In the publication, the youth explore what it means to be Lutheran today in Norway and within a global and pluralistic context, and how to be part of a global Christian family.

Luther did not start by asking himself how he could make the trade of indulgences and the worship of saints relevant in a new era. He found the center of the Christian faith, and ended up making radical changes that still matter today.

“We wanted to empower the Lutheran youth in Norway, to give them a voice and some basic knowledge of what is happening to our sisters and brothers all over the world. In this way, we hoped to give them the tools to speak up against injustice and to inspire others to take action,” Fosby said.

In the document, they state that to be a reformer today is to live amid the tension between cherishing the roots of the Reformation while working to create something new in the 21st century.

“Luther did not start by asking himself how he could make the trade of indulgences and the worship of saints relevant in a new era. He found the center of the Christian faith, and ended up making radical changes that still matter today,” the Reformer Today states.

“Reformation is not only about creating something new. It is about making the church what it is meant to be,” the young people emphasize.

The Reformer Today highlights the importance of religious education, noting that the Norwegian Lutheran church needs young people who can reflect on their faith and understand its consequences for their lives.

The document calls on the church to make room for young people within the church’s democratic structures, create new places for youth and give young people more responsibility for interpreting biblical texts.

The youth also urged greater visibility for the church’s diaconal work, adding, “The church should always be looking to reveal and relieve suffering and hopelessness.”

The Young Reformers made presentations to the Church of Norway general synod in 2016, met with the Norwegian National Committee of The Lutheran World Federation (LWF), attended the youth church synod, and held a gathering for Sami youth. They utilized social media to promote their efforts over 12 months ending this February.

Talking about faith and doubt

The church synod upheld elements from the Reformer Today and the youth synod report that wherever the governing body members meet, conversations around the future of the church and the role of youth will occur.

“The youth synod believes that the church should be a natural place for learning, exploring, and talking about faith and doubt,” Lalim said, echoing the document.

The Young Reformers’ efforts directly reached more than 300 youth across the 3.75 million-member church. Their efforts are part of the communion-wide “Living Reformation” projects coordinated by the LWF through its Global Young Reformers’ Network. The aim is to encourage more young people to contribute to the life of member churches, and take part in commemorating 500 years of the Reformation.

Although not everything went as scheduled, Fosby and Lalim said they were able to accomplish their main goals.

“It was difficult to bring the international aspect into the meetings and to encourage new Norwegian youth to become Global Young Reformers,” said Fosby.

The two Young Reformers remain optimistic and have their eyes set on seeing the church remain an important part of people’s lives in Norway. “I want to see an open church, where people feel welcome and appreciated, a church that is near to people’s lives,” concluded Lalim.

More information on the project