Reformed churches: theology in the service of justice 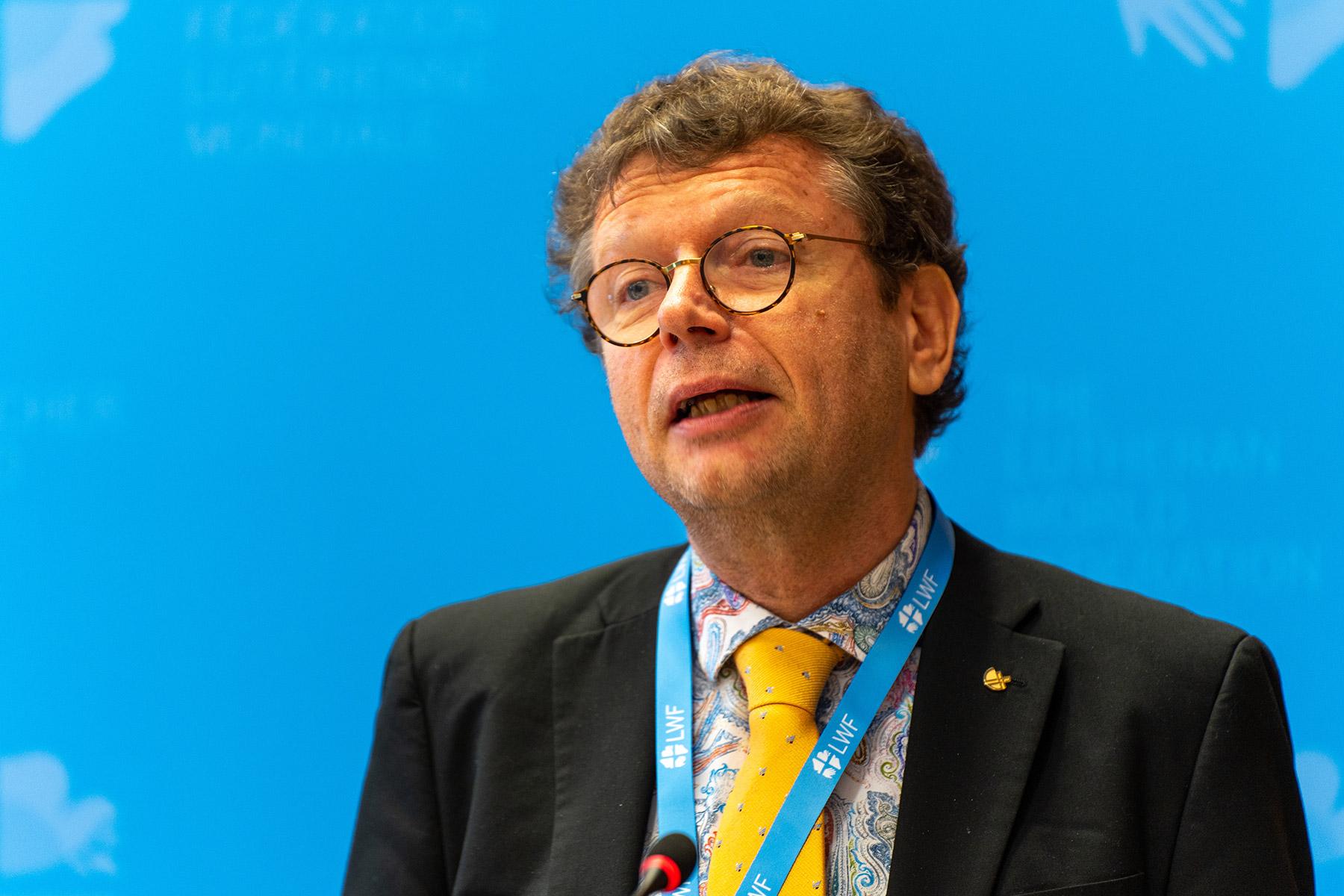 (LWI) - “Theology matters,” because it can both “guide and motivate our work for justice.” That conviction underpins the ministry of Rev. Dr Hanns Lessing, currently serving as Acting General Secretary of the World Communion of Reformed Churches (WCRC). Lessing, an ordained minister with the Evangelical Church of Westphalia in northern Germany, is a familiar face for many in Geneva’s Ecumenical Center and within the wider ecumenical world.

The son of parents who both worked as pastors in the same church, Lessing has been engaging theology in the service of justice for all of his adult life. Early in his career, he spent a decade teaching theology and ecumenism to seminary students in Namibia, while also working on a study process to help churches deal with the legacy of colonialism and apartheid.

As well as serving as part of a ‘Collegial’ General Secretariat during a period of restructuring for the WCRC, Lessing’s main role is that of Executive Secretary for Communion and Theology. As such, he represents the global communion of 235 churches in 105 countries, gathering about 100 million Reformed Christians, at many international and ecumenical events and plays a key role in helping to shape relations between the WCRC and the Lutheran World Federation (LWF).

“About four fifths of our members are in the global south,” Lessing notes, “and therefore we are living out the movement of the center of Christianity from north to south. This shapes our spirituality, our political stance and our theology of justice, while we have very much embraced the concept of mission from the margins,” he says.

As part of this focus, the WCRC is spearheading an important ecumenical program to promote greater economic justice, especially for those living with the lasting consequences of colonialism. The New International Financial and Economic Architecture (NIFEA) initiative grew out of a 2004 meeting in Ghana where, Lessing recalls “the Reformed churches declared that the economy was a matter of faith, because an economic system which produces poverty, injustice and hunger, which is being secured by military means and divisive ideologies, is in contradiction to God’s covenant with the earth.”

The Accra Confession, as the declaration became known, “stimulated lots of ecumenical discussions, as the churches became aware of the importance of learning the language of economic justice,” Lessing says. “If we can agree that the economy is a letter of faith, then we must ask ourselves, what is it that we can do as churches to make a difference?”

In response to that question, the NIFEA program, a partnership of WCRC with the LWF, the World Council of Churches (WCC) and the Council for World Mission (CWM), has given birth to two very practical initiatives. The first is an annual training on governance, economics and management, known as the GEM School for an Economy of Life, which teaches key advocacy skills to promote a more effective engagement with government policies in different contexts.

A second successful initiative, launched in 2019 at the United Nations in New York , is the Zaccheus campaign for tax justice. The ecumenical ‘ZacTax’ campaign is based on the biblical story of Zaccheus, the tax collector, who meets Jesus and repents of his evil ways, seeking to make reparation for his previous injustices and exploitation. “The churches are well respected for their proclamation on justice issues, but we need to work more on moving towards effective mission and this requires training, reflection and theology to guide us in economic justice advocacy,” Lessing insists.

Gender justice is another key issue that is “high on the Reformed churches’ agenda,” Lessing says. In 2017, the WCRC “adopted a faith stance” on women in ministry, “emphasizing the priesthood of all believers and therefore that it is against the gospel to deny women’s ordination.” His own convictions are colored by the experience of his mother, who was ordained as a minister in one of the united churches in Germany in the early 1960s but had her ordination rites withdrawn when she married a year later. (They were reinstated the following decade when church law changed and she went on to be elected as president of the Council of Elders in her congregation).

Pursuit of communion and common witness

Practical cooperation continues to characterize relations between the WCRC and the LWF “in the pursuit of communion and common witness,” as their 2017 Wittenberg Witness statement affirms. Later this year, they will cooperate on two further initiatives aimed at developing and deepening shared theological reflection in the post-pandemic era. The first is a hybrid conference on Pandemic and Pedagogy, based at Trinity Theological Seminary in Accra, which will take stock of “the threats and opportunities that have surfaced” for theological institutes during the COVID-19 period.

Lessing notes that the pandemic was “both a crisis and an opportunity for many church schools, seminaries and institutes.” The December conference, he continues, will explore how churches dealt with the trauma and the challenges for staff and students. Secondly, it will share best practices of digital technology and thirdly, it will examine the way in which these institutes “had to rethink their goals and objectives, with many seeing an opportunity to reach out beyond their traditional role to offer a contribution of lay training and discernment in times of crisis for society at large.”

A second conference in planning by the WCRC and the LWF will explore key issues around the right to freedom of religion and belief, which Lessing notes is “a significant discussion in many of our member churches and plays out differently in their different contexts.” From the persecution of churches in non-Christian countries, to the exploitation of religious freedom to justify war in Europe, the conference will study different scenarios and develop a guide for churches seeking to navigate these complex questions.

We did not commit to institutional goals but, rather, we prayed together for new imagination to live out the unity we already share.

"Decades of theological dialogue have confirmed that there is nothing church dividing to separate Lutheran and Reformed churches,” Lessing concludes, “but the big question for us is where does this lead to? Our Wittenberg Witness, marking the 500th anniversary of the Reformation, was important because we did not commit to institutional goals but, rather, we prayed together for new imagination to live out the unity we already share.”