A radio against disaster 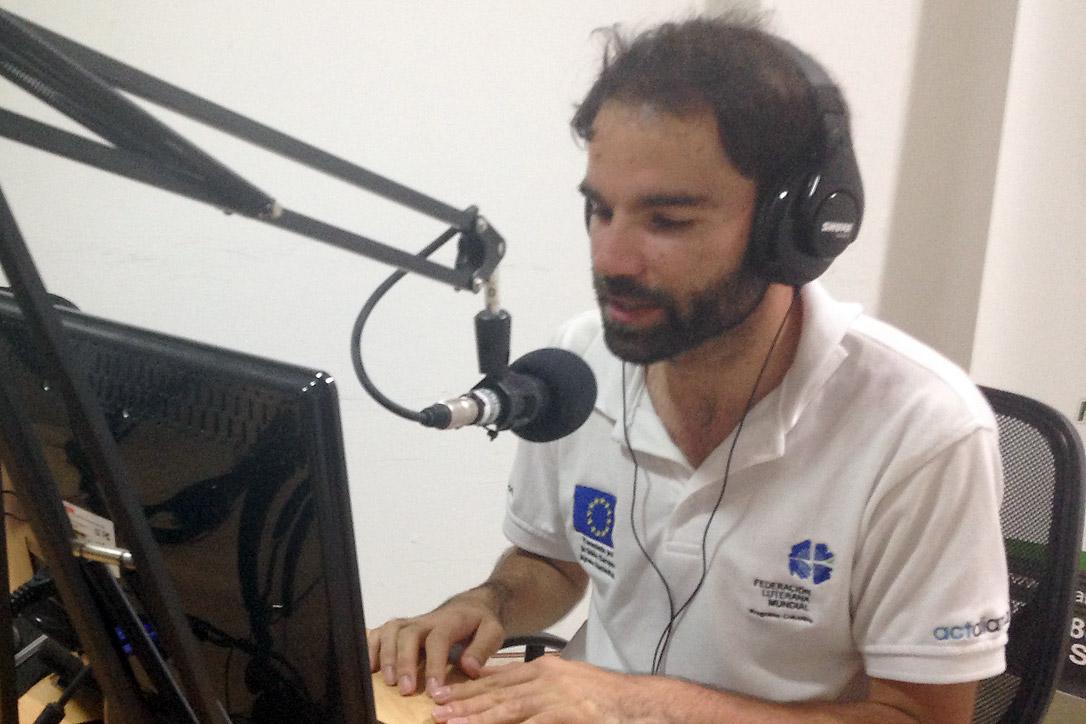 “Alerta Comunidad” in Colombia educates about risk management and reduction

(LWI) – “Good morning and welcome to Alerta Comunidad – the program for risk reduction by the Lutheran World Federation.” – People in Arauca, Colombia have by now become used to a few traditional rythms called “llanera” music, and the voice of Víctor Linares, sounding every Thursday morning over the community radio channel in the municipality of Saravena.

For half an hour the communications officer of The Lutheran World Federation (LWF) Disaster Preparedness (DIPECHO) project, run with funds from the European Commission, talks about risk management and climate change adaptation and related issues, like land mines, swelling rivers or authorities responsible in cases of disaster.

Together with experts from the local and regional level or people from Saravena community, the program shares advice about how to prepare for and act in case of disaster. “Alerta Comunidad” ("Community Alert") broadcasts stories of people who have been affected. The fifth edition, which aired on the evening (local time) of 10 November, focused on CO2 emissions, climate change and how it affects the community.

“Good morning and welcome to Community Alert – the program for risk reduction by the Lutheran World Federation.”

Saravena is located in the Arauca department, one of the two main places where LWF works in Colombia. The people in Arauca are suffering from two very different situations: armed conflict and natural disaster. The area was a contested site and supply route for armed groups in the Colombian civil war and communities have often found themselves between the lines or even targeted by one of the groups. On the other hand, the region is prone to natural disaster, especially flooding from the Arauca River, which has affected hundreds of people in the past. In this context, “Alerta Comunidad” is an important part of the LWF strategy to help people prevent and avoid risks.

The first edition of “Alerta Comunidad” was aired on 13 October to mark the International Day for Disaster Risk Management. Since then the radio program has been broadcast every Thursday from 7:00 a.m. to 7:30 a.m local time by local radio station Sarare FM Stereo.

"The programs aim to be participatory, informative and educational. We plan to address issues such as knowledge of the land and territory, the responsibility of individuals and public or private institutions for disaster risks, and how to act in case of emergencies," says DIPECHO project coordinator Guillermo Toro Zuluaga.

Broadcasts so far included how to deal with flooding and the expanding river, the dangers of land mines, and stories from the community members regarding the changes in the territory due to climate change and exploitation. On 10 November during the climate conference COP22 in Marrakech, the program presented the dangers of CO2 emissions and the consequences for community life.

Risk Management has been one of the strategic work areas of the LWF in Colombia since 2000. The aim is to enable people and communities to better prepare for frequent disasters such as flooding, hurricanes and droughts. In workshops the communities train to respond effectively and to quickly recover from all types of disasters and complex emergencies.

Emergency operations combine materials and psychosocial support, with particular attention to the most vulnerable people. The LWF supports communities to be part of the solution, to demand their rights, manage safety and security themselves and establish community structures that allow for people to participate in decisions.

"Community Alert", directed and produced by the LWF, can be heard on the frequency 88.3 FM Stereo Sarare or through the website of the station. You can also access the programs through the profile of the LWF in Hearthis.

The project is supported by the General Direction for Humanitarian Aid and Civil Protection from the European Commission (ECHO) and the Evangelical Lutheran Church in America.