Professional rescuers and volunteers team up 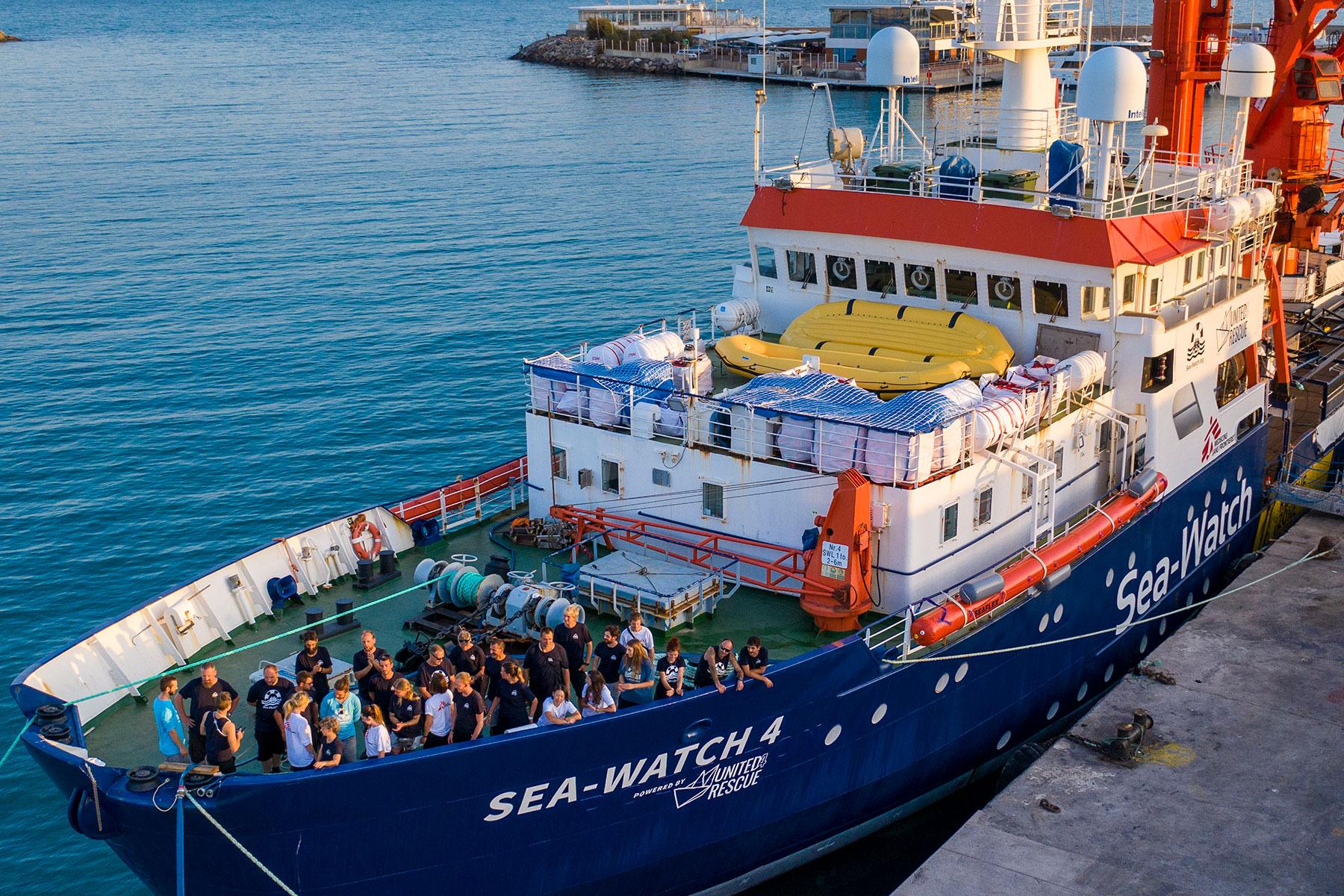 The crew of the Sea-Watch 4 meeting on deck the evening before the ship headed for the central Mediterranean off the Libyan coast. Photo: epd-bild/Thomas Lohnes

(LWI) - The sea rescue vessel Sea-Watch 4 has departed on its first mission in the Mediterranean. The ship left the Spanish port of Burriana on 15 August and has reached the search and rescue zone off Libya.

Sea-Watch is an initiative dedicated to civil sea rescue in the central Mediterranean. It is currently the only rescue ship in the Mediterranean. Originally scheduled to leave in April, preparation was delayed because of the Coronavirus disease (COVID-19) pandemic.

The purchase and makeover of the former research vessel was financed by the alliance “United4Rescue”, initiated by the Evangelical Church in Germany (EKD). In addition to Sea-Watch, Médecins Sans Frontières (MSF) is also involved in the project.

"The medical team is prepared”

Barbara Deck from Canada is part of the MSF team on board the Sea-Watch 4. The nurse coordinates the medical team on board. When asked in which state she expects the refugees to be in, she mentions pregnant women, people who have experienced violence in Libya, chemical burns and cases of Covid-19. Deck describes the virus, which still holds the world hostage, as a “big challenge”. But: the medical team is prepared, she assures.

Infection controls are part of the standard procedure and there is an area on board where people carrying the virus can be isolated. The modern sickbay is equipped to provide first aid and has facilities to treat injured and weakened rescued people. Also, there are 24 beds for women and children set aside in a safe area.

Jakob Führmann from Austria is a high school teacher and another member of the current crew of Sea-Watch 4. For two years he has been active with the Sea-Watch association and is volunteering his time to take care of the “crewing”. He looks for the right and qualified people for the crew for the sea rescue vessels. Due to the political pressure the association is exposed to, the demands on crew and ships have become steadily higher, he says. Many positions on board are now occupied by nautical professionals. Furthermore, the crew consists of many volunteers - for example those who care for the rescued persons.

In Führmann's opinion, Christian congregations should take a much stronger political stand. In civil society he sees a big need for people to support and assist the work of Sea-Watch so that it is no longer criminalized.

Not everyone involved in sea rescue is on board a rescue ship. Tamino Böhm from Germany is Head of Mission at Airborne Operations. This means that he conducts reconnaissance flights with the “Moonbird” and “Seabird”. These planes support the work at sea considerably. From the air, Böhm and his team observe developments in the central Mediterranean, the search and rescue zones of the Europeans and of the Libyans. The team then reports the maritime emergencies to the relevant authorities and ships in the vicinity. “We are everybody’s eyes,” he says.

Monthly logs of the airborne operations show what happened in January and February 2020 and then again in June on the central Mediterranean (in the months in between the aircraft was grounded due to the Coronavirus pandemic). In January alone, about 500 people were in distress on the Mediterranean Sea; most of them in overloaded rubber boats and without life jackets.

The Sea-Watch reconnaissance planes have documented more than 1,500 people in distress in the past six weeks, says Michael Schwickart from United4Rescue. Many of them were brought back to Libya. During that time, no civilian rescue services were deployed off the Libyan coast. Almost all ships were detained by the Italian authorities due to alleged safety deficits or prevented from leaving harbor by unfulfillable obligations.

The Italian and Maltese authorities have hampered civil sea rescue for many months, the news agency “Evangelischer Pressedienst” reports. They are calling for a better distribution of the refugees within Europe. Crews are sometimes denied permission to land in a port for weeks at a time, ships are detained, crew members are prosecuted. The Coronavirus pandemic and measures to contain it further complicate the work of the rescuers.

Heinrich Bedford-Strohm, Bishop of the Evangelical Lutheran Church in Bavaria and Chairperson of the Council of the EKD, said he was grateful that the commitment of many people has led to the Sea-Watch 4 being able to set sail. “Europe needs to see that the policy of looking the other way is no longer accepted. The deployment of the ship is both: a humanitarian aid measure, but also a political sign that we will continue to act.”

The idea of a sea rescue ship sent to the Mediterranean by churches goes back to the “Kirchentag” in Dortmund 2019. In January, the United4Rescue alliance purchased the ship “Poseidon” for 1.3 million Euros, including 1.1 million Euros in donations from the alliance, to which over 550 organizations and companies are affiliated by now. In February the renamed “Sea-Watch 4” was launched in Kiel, (Germany) and handed over to the Sea-Watch sea rescue organization.