Press release: Rediscovering who we are in Christ 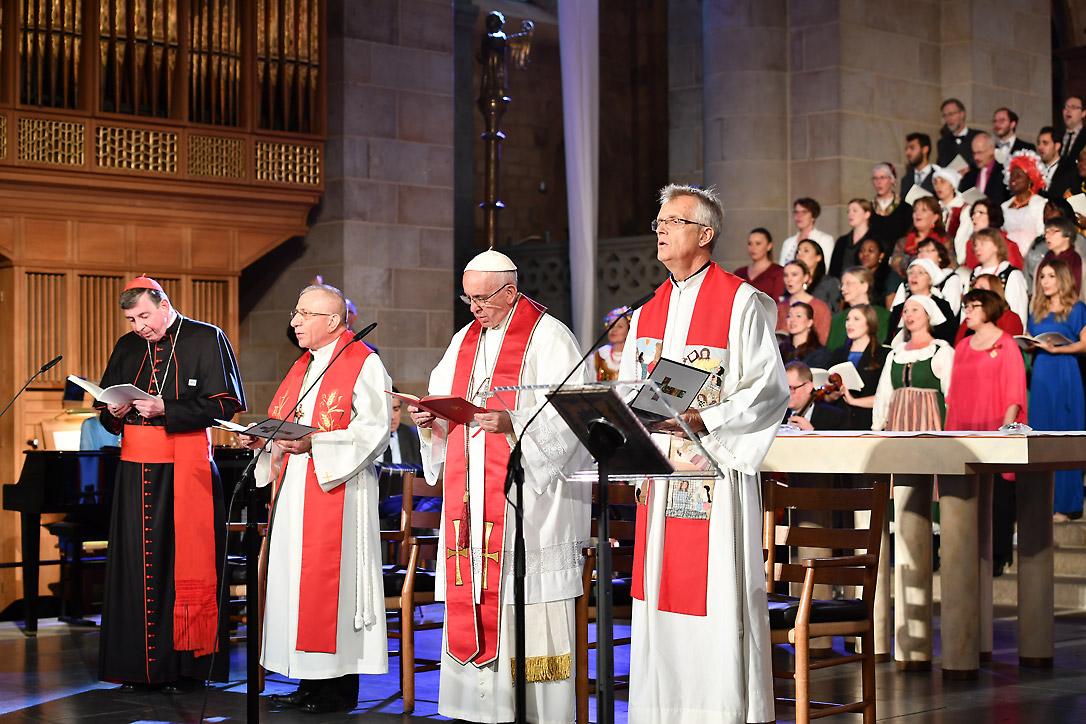 Historic Joint Commemoration of the Reformation in Lund Cathedral

(LWI) – Pope Francis and the General Secretary of The Lutheran World Federation Rev. Dr Martin Junge jointly preached on the gospel of the true vine (John 15:1-5) during the Common Prayer of the Joint Catholic-Lutheran Commemoration of the Reformation in Lund, Sweden, today. They spoke about the unity in Christ that Lutherans and Catholics have together and the opportunities for joint witness in a world that needs the message of the gospel of Jesus Christ in words and actions.

“Now in the context of the commemoration of the Reformation of 1517, we have a new opportunity to accept a common path, one that has taken shape over the past fifty years in the ecumenical dialogue between the Lutheran World Federation and the Catholic Church,” Pope Francis stated in his sermon, adding: “We have the opportunity to mend a critical moment of our history by moving beyond the controversies and disagreements that have often prevented us from understanding one another.”

"As we see Jesus among us, we have also started to see each other anew. We acknowledge that there is much more that unites us than that which separates us. We are branches of the same vine. We are one in Baptism. This is why we are here at this joint commemoration: to rediscover who we are in Christ," said General Secretary Junge in his sermon, calling upon Catholics and Lutherans “to move away from a past overshadowed by conflict and division and to walk the paths of communion.”

Today’s historic event—the first Joint Catholic-Lutheran Commemoration of the Reformation at the global level—was witnessed by 450 ecumenical guests in Lund Cathedral, Sweden, as well as the 10,000 visitors in Malmö Arena and television viewers worldwide. Pope Francis co-hosted the event with LWF President Bishop Dr Munib A. Younan and General Secretary Junge. The Common Prayer in Lund Cathedral focused on thanksgiving, repentance and a commitment to joint witness.

During the church service a Joint Statement was signed which embraces communion as the common future of Lutherans and Catholics. A colorful cross created for the event by Salvadoran artist Christian Chavarria Ayala visualized the Triune God’s creative, reconciling and sanctifying work.

Opening the service Archbishop Antje Jackelén of the Church of Sweden, welcomed the international guests: “We celebrate the great promises of Christian faith.” Bishop Anders Arborelius representing the other local church, added: “We hope, we pray, and we long for that perfect visible unity that can persuade the world that the Risen Lord is alive and at work among us.”

During thanksgiving Cardinal Kurt Koch, President of the Pontifical Council for Promoting Christian Unity, stated: “Catholics and Lutherans embrace each other as sisters and brothers in the Lord. Together they rejoice in the truly Christian gifts that they both have received and rediscovered in various ways through the renewal and impulses of the Reformation.”

Bishop Younan thanked God “for the proclamation of the gospel that occurred during the Reformation and that since then has strengthened countless people to live lives of faith in Jesus Christ.”

A powerful moment was the sharing of the sign of peace during the prayer. Pope Francis called for peace with the words “let the peace of Christ to rule in your hearts, since as members of one body you are called to peace.” This was followed by LWF President Younan’s invitation to those assisting in the service, participants in the Lund cathedral and those present in Malmö Arena to offer each other a “sign of reconciliation and peace.”

The affirmation of five imperatives formulated in the report From Conflict to Communion was symbolized by the lighting of a candle once each one had been read. The five Imperatives commit Lutherans and Catholics to strengthen what is held in common, to transformation by the encounter with the other and by the mutual witness of faith, to seeking visible unity through concrete steps, to rediscovering the power of the gospel of Jesus Christ for our time and to joint witness in proclamation and service to the world.

As a sign that Catholics and Lutherans were committed to taking a further step towards the unity into which God calls the church, Pope Francis and LWF President Younan signed a Joint Statement. It calls on Lutheran and Catholic parishes and communities to be “bold and creative, joyful and hopeful in their commitment to continue the great journey ahead of us.”

The prayer service in Lund Cathedral will be continued in Malmö Arena, affirming the common witness and service of Catholics and Lutherans to people in need. LWF World Service and Caritas Internationalis will sign a Declaration of Intent highlighting their global engagement as an expression of their common faith in God.