Polish church will host the Thirteenth LWF Assembly in 2023 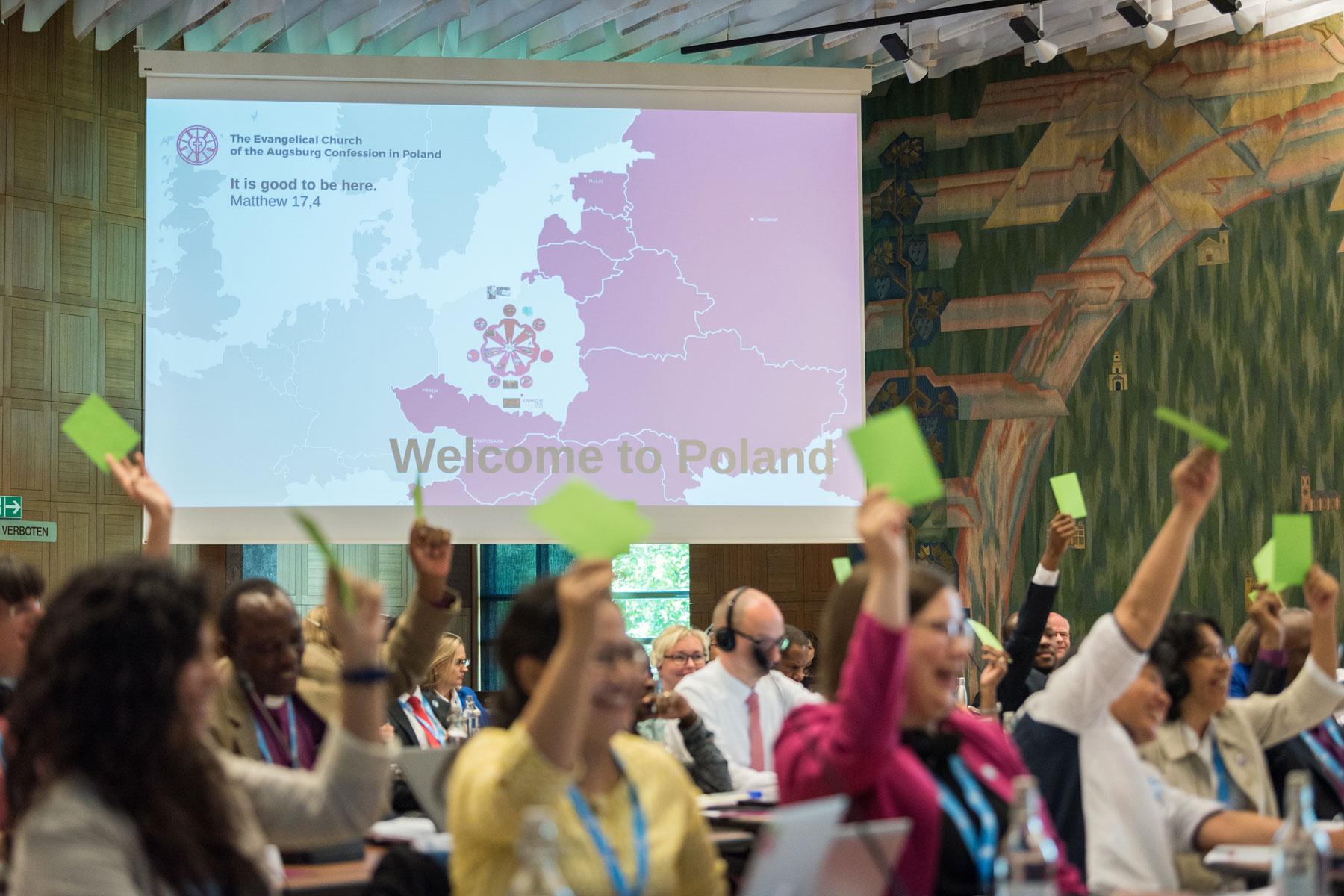 Unanimously, the Council voted to hold the Thirteenth Assembly of the LWF in Krakow, Poland. Photo: LWF/Albin Hillert

Bishop Samiec: An “opportunity to promote diversity and Lutheranism in society”

(LWI) - The Evangelical Church of the Augsburg Confession in Poland will host the Thirteenth Assembly of The Lutheran World Federation (LWF) from 13 to 19 September 2023*, in the southern city of Krakow. The LWF Council made this decision today, applauding an invitation presented by Presiding Bishop Jerzy Samiec.

Thanking Polish Lutherans for extending their hospitality to the global communion, LWF President Archbishop Dr Panti Filibus Musa said, “We are grateful for the invitation by the church and people of Poland to host the Assembly. We pray that it will be a blessing to the church and its mission, and to the communion of Lutheran churches.”

“Organization of the Assembly would certainly be one of the most important events in the history of our church and an opportunity to promote diversity and Lutheranism in the Polish society,” Samiec said in his invitation.

Organization of the Assembly would certainly be one of the most important events in the history of our church and an opportunity to promote diversity and Lutheranism in the Polish society.

Expressing his joy for the Council’s decision, the presiding bishop noted the idea to host the LWF assembly was first discussed in 2014 but the turning point was the 500th Reformation anniversary commemorations in 2017 in Poland, for which the Lutheran church organized several activities. The jubilee event was attended by LWF leaders, church representatives from other countries and locally, ecumenical guests including Poland's Catholic Church Archbishop Wojciech Polak, and the country’s president Andrzej Duda.

“After today's decision, we are very pleased, yet we realize that this is the beginning of a long road leading to the Assembly. We want to make it as memorable as possible for all the participants. Thank you again for choosing our church as the host of the next LWF Assembly. Let’s get down to work!”

Courageous testimony to the world

Samiec said he hopes the LWF assembly will be a moment for the Lutheran communion to offer “courageous testimony flowing from our faith in Jesus Christ.” The world today needs “a clear position of the Church” amid many challenges such as the “unimaginable economic stratification,” climate change, forced migration, and “the re-emergence of nationalist slogans that loudly exclude entire social groups,” he added.

The beginnings of the Polish Lutheran church are closely linked to the early years of the 16th century Reformation, influencing the establishment of Protestant schools, and the publishing of the entire Bible by 1563. Though marked by the impact of war in later centuries and 40 years of communism, the church has maintained strong witness including a diaconal arm, which today supports the elderly, people with disabilities and families in difficult circumstances.

Led by Presiding Bishop Jerzy Samiec, the Polish Lutheran church has 70,000 members. It is organized in six dioceses headed by bishops, who are assisted by more than 150 pastors across 133 parishes.

This will be the second time LWF’s highest decision-making body will meet in Central Eastern Europe (CEE). In 1984, the Evangelical Lutheran Church in Hungary (ELCH) hosted the Seventh Assembly in the capital Budapest.

The Council also appointed an eight-member Assembly Planning Committee (APC) to coordinate the development of other assembly components including the theme, worship life, content and visual identity.

The APC members represent all the seven LWF regions, and consist of lay and ordained men, women and youth. The composition complies with the LWF representation and participation threshold of 40 percent each for each gender, and 20 percent youth.

The committee will meet twice prior to the assembly notwithstanding necessary additional online meetings, and submit a final report to the Council in 2021.

The Twelfth Assembly was held in Windhoek, Namibia, 10-16 May 2017, under the theme “Liberated by God’s Grace.” It was jointly hosted by the three LWF member churches in the country.

A new website for the Thirteenth Assembly was also launched today. Those interested can sign up to be notified of further news about the next LWF assembly.

Thirteenth Assembly website
Other Council Resources
Photos from the Council

* This news has been updated to reflect the changed dates of the Assembly.

The Evangelical Church of the Augsburg Confession in Poland has its beginnings in the early years of the 16th century Protestant Reformation, and was one of the founding member churches of the LWF in 1947. Led by Presiding Bishop Jerzy Samiec, it has over 60,000 members. It is organized in six dioceses headed by bishops, who are assisted by more than 150 pastors across 133 parishes.