This is the perfect time to be the church 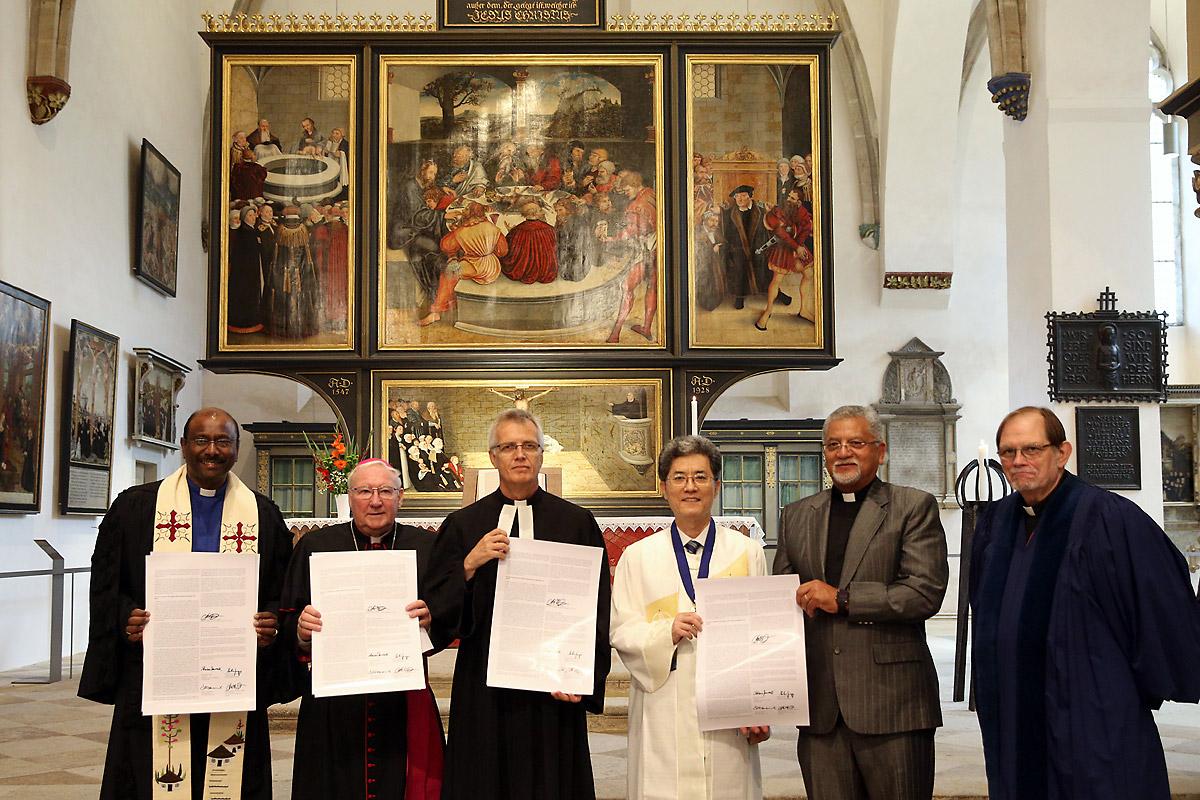 The Wittenberg Witness was signed in the City Church in Wittenberg in July 2017 by The Lutheran World Federation and the World Communion of Reformed Churches. The WCRC also signed an association agreement to the Joint Declaration on the Doctrine of Justification (JDDJ), originally signed by the LWF and the Roman Catholic Church in 1999, and later joined by the World Methodist Council. Photo: WCRC / Anna Siggelkow

General Secretary, you have witnessed LWF member churches around the world as they commemorate the Reformation Anniversary, what have you seen?

I have been inspired by all the events and programs that are being implemented by Lutheran churches all over the world. I could begin naming the activities and the churches in East and West, North and South that are really looking into marking the anniversary, often very publicly.

I’m amazed about their creativity and their determination to go public, to let their communities and society at large now about their identity. For me this is a reminder that the reformation is indeed a global citizen and that it is ongoing.

For me this is a reminder that the reformation is indeed a global citizen and that it is ongoing.

Reformation Day on 31 October will be a highpoint in the commemoration, where will you be on that day?

The LWF has approached the Reformation anniversary with a strong ecumenical focus. Different to past centennial anniversaries, the focus is on what unites us with other Christian World Communions, instead of taking a point of departure on our differences.

I have accepted an invitation to be at the Westminster Abbey where there will be an ecumenical commemoration event which includes an affirmation of the substance of the Joint Declaration on the Doctrine of Justification (JDDJ) on behalf of the Anglican Communion. This affirmation will be presented to the representatives of Lutheran World Federation and Pontifical Council for Promoting Christian Unity, the initial signatories of JDDJ, at the presence of representatives of World Methodist Council and the Reformed who associated with JDDJ in 2006 and 2017 respectively.

I am deeply grateful to our bilateral dialogue partners for the ways in which they have supported us to engage the anniversary ecumenically. We couldn’t have done without them. A year ago we were in Lund and Malmö at the Joint Catholic-Lutheran Commemoration with the Roman Catholic Church. In July we were in Wittenberg with the World Communion of Reformed Churches signing the Wittenberg Witness. On October 31 we will be with our Anglican sisters and brothers. And later, in November, we will be commemorating the anniversary together with our Orthodox dialogue partners. There is no doubt: to be Lutheran is to be ecumenical, and we are blessed by our ecumenical relations.

When you speak of an ongoing reformation, do you have specific challenges in mind?

The 500th anniversary of the Reformation finds us in a time of turmoil, insecurity and changes. For many people looking to the future brings anxiety and fears about peace, ecological degradation and what this may mean for the coming generations, our children. There is much concern about the indifference to the reality that we as a human family depend on each other and on God’s creation at large. There is so little space for grace and compassion. Peace and justice are under pressure.

We are empowered to become ambassadors of peace, justice and reconciliation in our world. So we are freed to serve.

But precisely because of this I think this is a perfect time to be the church. We have heard the powerful message of Jesus Christ and are called to share it: We are saved not because of who we are and what we do, but because of who God is and what God does. Addressed by God with love, compassion and mercy, we are empowered to become ambassadors of peace, justice and reconciliation in our world. So we are freed to serve. The message of Jesus Christ hasn’t lost any of its pertinence and relevance in today’s world. I know member churches will continue to live out their vocation to participate in God’s mission, witnessing to Christ in proclamation, service and in the ways they stand for justice.

And rightly so: Because God is alive, God continues addressing us, saving and freeing us. That is why the church has a mission, that is why the Reformation is ongoing.

COVID-19: Being fully the church in times of Coronavirus
news