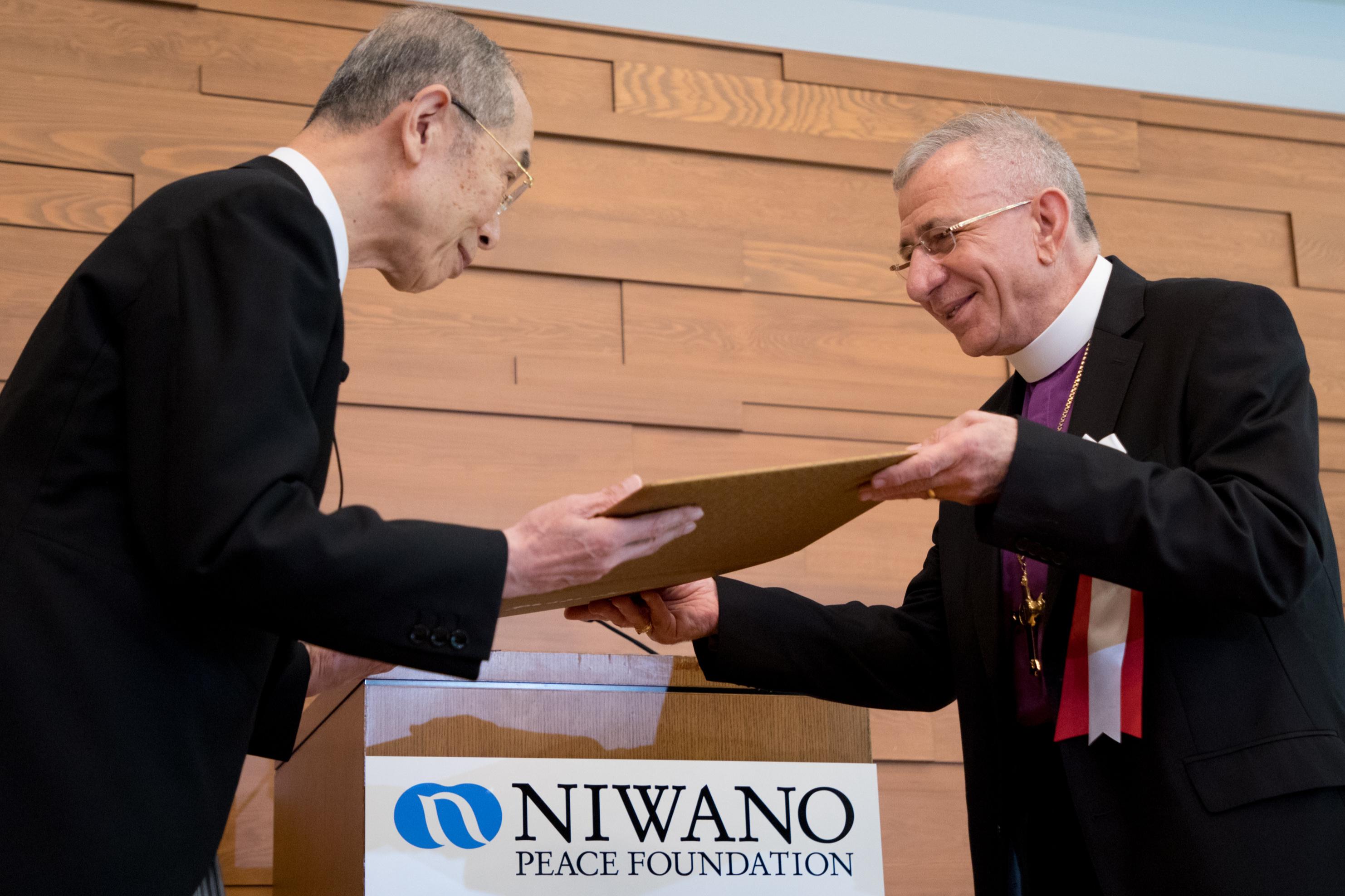 Calls for robust moderation that rejects all forms of extremism

Palestinian Lutheran Bishop Dr Munib A. Younan today received the Niwano Peace Prize, with a plea for greater engagement of faith leaders in confronting extremism and “the sick ideologies which pervert our religions.”

The bishop of the Evangelical Lutheran Church in Jordan and the Holy Land (ELCJHL) became the 34th recipient of the distinguished prize during a ceremony held in the Japanese capital Tokyo.

The Niwano Peace Foundation recognized Younan for his tireless work toward interreligious dialogue among Christians, Muslims and Jews in Jerusalem and around the world, for long-standing commitment to moderation, and compassion to all sides involved in conflicts.

As a strong believer in the power of dialogue, you have persistently worked to create spaces where people of different faiths can meet in peace and develop mutual trust.

“As a strong believer in the power of dialogue, you have persistently worked to create spaces where people of different faiths can meet in peace and develop mutual trust,” the foundation stated in its citation for the prize. The Honorary President of the Niwano Peace Foundation, Rev. Nichiko Niwano presented the award to Younan.

In his acceptance speech, Younan insisted that leaders of all faith traditions should confront the extremists in their midst “through a witness of robust moderation, rejecting that extremism is somehow the measure of faithfulness.”

He said, “Moderates are not wishy-washy. The moderate is not a person without identity. If we are going to challenge extremist theologies and the extremist politics they support, we must reclaim the center within our respective traditions.”

The ELCJHL bishop described the alliance between political interests and religiously sanctioned extremism as a dangerous trend today. Citing examples from his own region, the Middle East, he noted that no single religion has a monopoly on extremism.

Jerusalem, Younan said, is challenged daily by extremism from Jewish settlers who with politicians’ support “seize land in the name of the Bible; […] by Muslims who think the darkest interpretations of Islam are the only way to confront an opponent […]; and by Christian Zionists who come to our city to view it as an Armageddon playground where their visions of the End Times will one day unfold.” Such voices, he added, promote an apocalyptic war not only in the city but in the whole world.

At the Tokyo ceremony, the LWF general secretary paid tribute to Younan’s constant efforts for peace in a world marked more than ever by unrest, fragmentation and rupture.

Junge lauded the ELCJHL bishop for carrying out this ministry in the difficult context of the Holy Land, where many of his neighbors have given up hope of achieving peace or reconciliation.

“He [Younan] has remained steadfast to his calling, drawing from the deep wells of faith. He advocates and speaks out, meets and talks, challenges and encourages for the sake of peace.”

LWF President Archbishop Dr Panti Filibus Musa expressed the Lutheran communion’s joy over what he described as the well-deserved recognition for the Palestinian bishop.

“You have been a strong voice denouncing the underlying causes for conflict and violence, and sharing your vision about building peace with justice in that very context in which the Prince of Peace came to transform the world,” said Musa, archbishop of the Lutheran Church of Christ in Nigeria.

The LWF president said Younan’s efforts had encouraged many Lutherans around the world to uphold visions of hope. Musa prayed that the awarding of the Niwano Peace Prize would promote peace in the Holy Land, thereby encouraging others toward reconciliation worldwide.

In his address, Younan also reflected on the commemoration of 500 years of the Reformation this year, saying the core message of liberation by God’s grace today must include liberating religion from extremism and corruption.

Religious leaders in complex situations know religion can help or harm the communities they serve. Religious leaders must understand that they have a role to play in seeking peace and justice for their communities, for the country, the world, he stressed.

The 34th Niwano laureate said as a Lutheran, he hopes all things will be reconciled under God, adding that such hope does not separate Lutherans or Christians from their neighbors but calls them into greater concern for their wellbeing, to embrace them rather than exclude them.