"Only together we can be the Body of Christ" 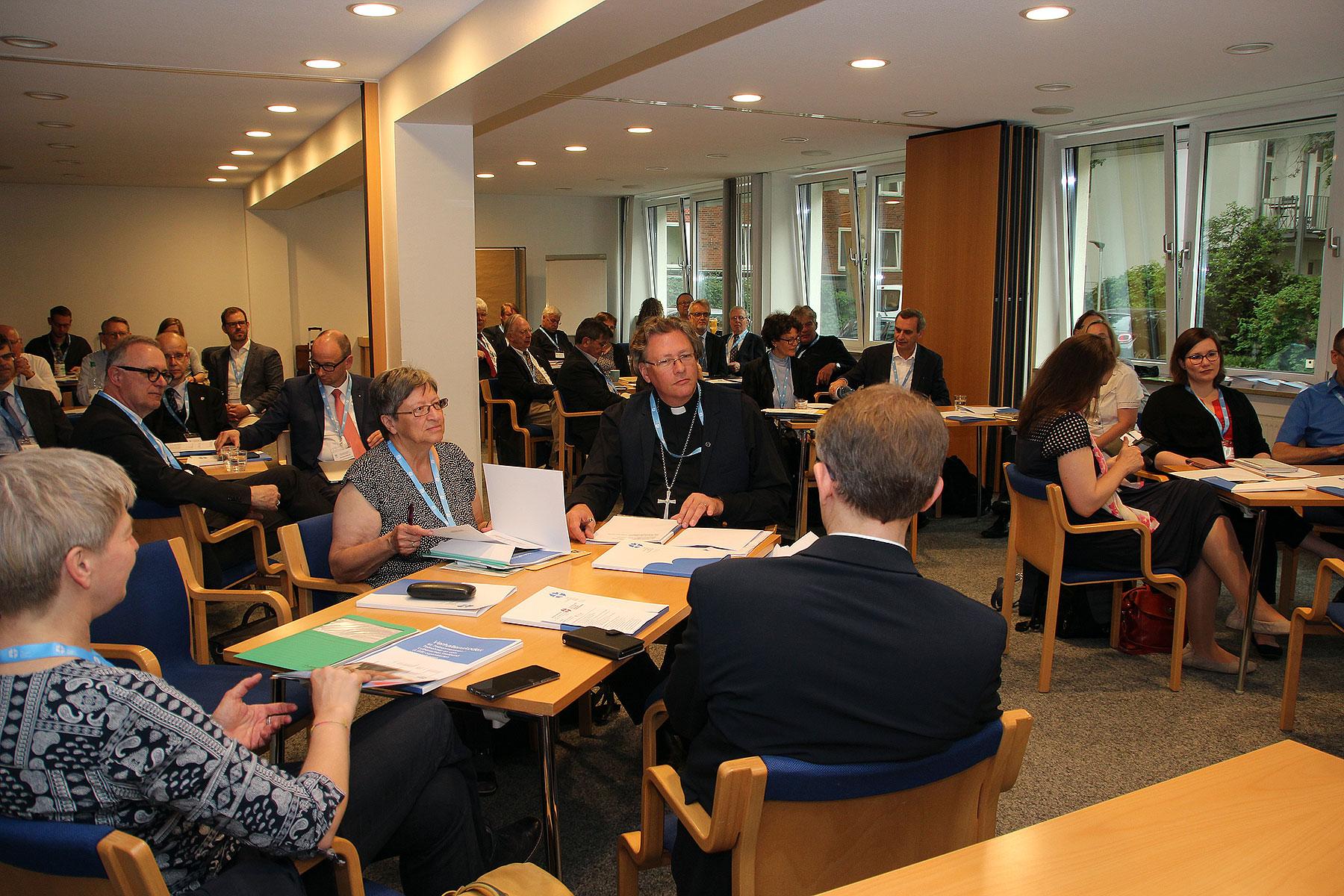 Working through the agenda: Consultations touched on the perspectives of the LWF, the âPeople on the moveâ diaconia process, the Nordic initiative âBeing church in times of changeâ, the Jewish-Christian dialogue, and the work of the Institute for Ecumenical Research in Strasbourg. All photos: LWF/A.WeyermÃ¼ller

(LWI) - The fact that the member churches of the Lutheran World Federation (LWF) in the region of Central and Western Europe already form a multi-faceted picture of small and large churches of distinctive character was confirmed by the participants in the consultation for church leaders of the region. The agenda included exchanging ideas and concepts, working together on common themes in the region, as well as current issues and future perspectives of the LWF as a whole.

Participants came from 14 LWF member churches and met on 2 and 3 June in Hamburg, Germany, at the invitation of the LWF Vice-President for Central and Western Europe, Pröpstin Astrid Kleist, and the German National Committee of the LWF (GNC/LWB). 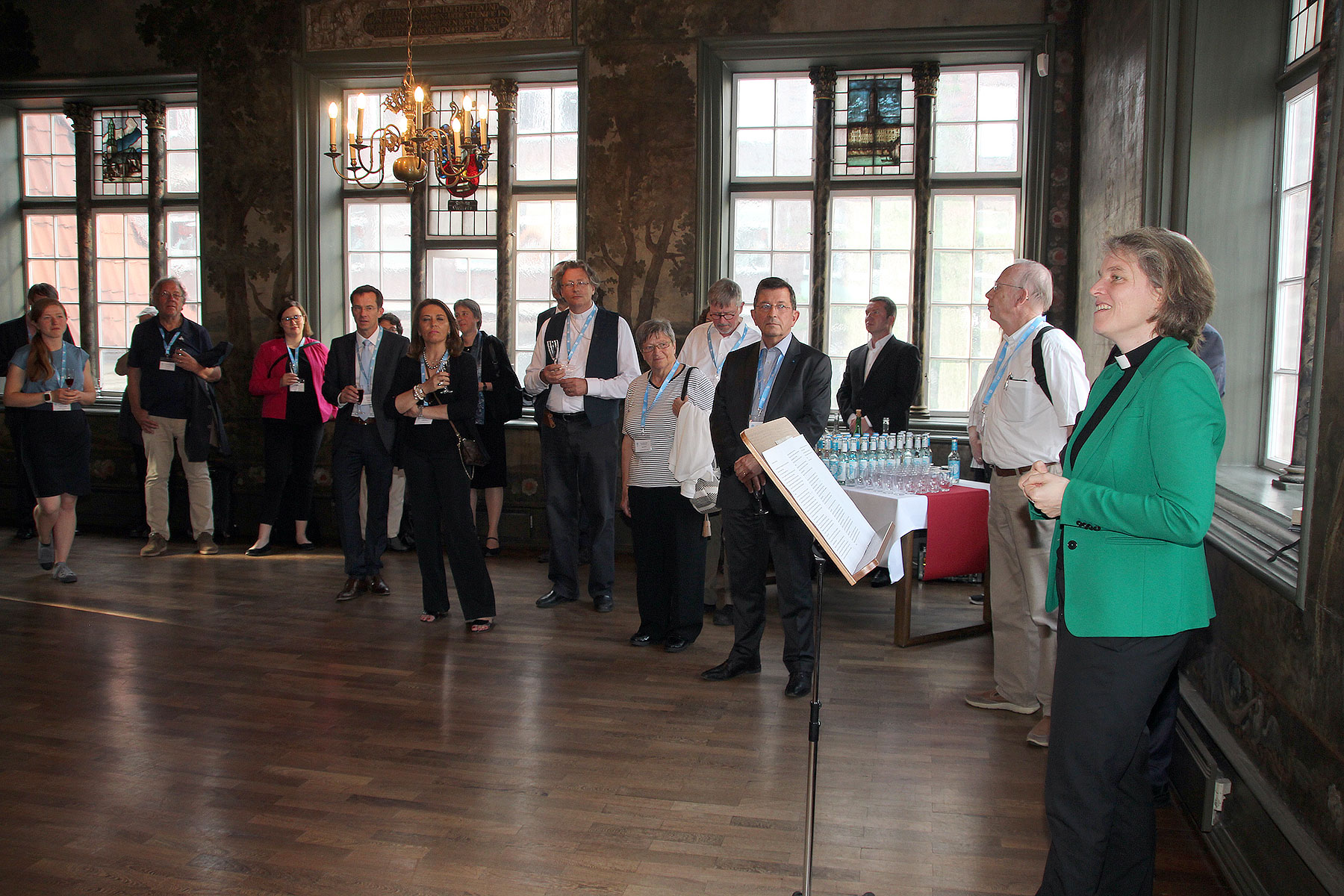 Kleist welcomed the participants in the historic “Herrensaal” (Councilors’ Room) of the St. Jacobi Church in the center of the city. Here a Round Table has been meeting here for 20 years to discuss controversial topics for the benefit of the city. The basic idea was "not to negotiate conflicts in the media, but to jointly create a space in which solutions can be found that no actor from politics, business, social welfare and church alone can come up with," said Kleist.

She also wished for the discussions between the churches in the region and in the LWF as a whole that their representatives "speak with each other in a trustful manner, knowing that it always takes all of us in our diversity to find adequate solutions".

Kristina Kühnbaum-Schmidt, Bishop of the Evangelical Lutheran Church in Northern Germany, took up this thread in her greeting. "Only together and through interaction amongst us we can be the Body of Christ, the embodiment of Christ in this world – no individual for him- or herself and no church for itself can claim that,” said Kühnbaum-Schmidt. At the same time, she reminded the delegates of the mindfulness and responsibility this implies: "All ecumenical unity, every ecumenical conversation, every theological work in the ecumenical context is inevitably linked to the themes of justice, peace and the integrity of creation".

Present issues and future perspectives in the LWF

In his presentation on present issues and future perspectives of the LWF, LWF General Secretary Martin Junge said that today the Lutheran communion has the vital task to give prophetic witness in a world where states and social actors "prioritize their self-containment over common interests and cooperation with others". In this respect, the LWF's task is also to "swim against the current".  On a critical and simultaneously concerned note Junge remarked that "it is in the global North where the most far-reaching decisions for undermining human rights are taken".

With a view to the changes in the church landscape, especially in the European context, Junge encouraged delegates to find "innovative approaches to being church instead of confining oneself to building on what already exists". The LWF's theological approach, which has been perpetuating itself since the Reformation Commemoration, is to hold together the "theological bracket of justification on the one hand, and freedom on the other. A church that preaches justification will always be a church that stands for freedom.”

Junge also referred to the weekly Fridays for future protests by students and expressed his high regard for their consistent commitment to climate justice. He regrets that these protests often take place during school time. Nevertheless: "It is up to us, the adults, to react to the protests in such a way that they can go back to school". For the LWF, climate justice is an intergenerational issue.

The LWF finds itself at a crossroads, said Junge. He pleads for not falling into a "paralysing nostalgia", but for opening up to the opportunities and challenges of the future and taking them on.

Being church in Central and Western Europe 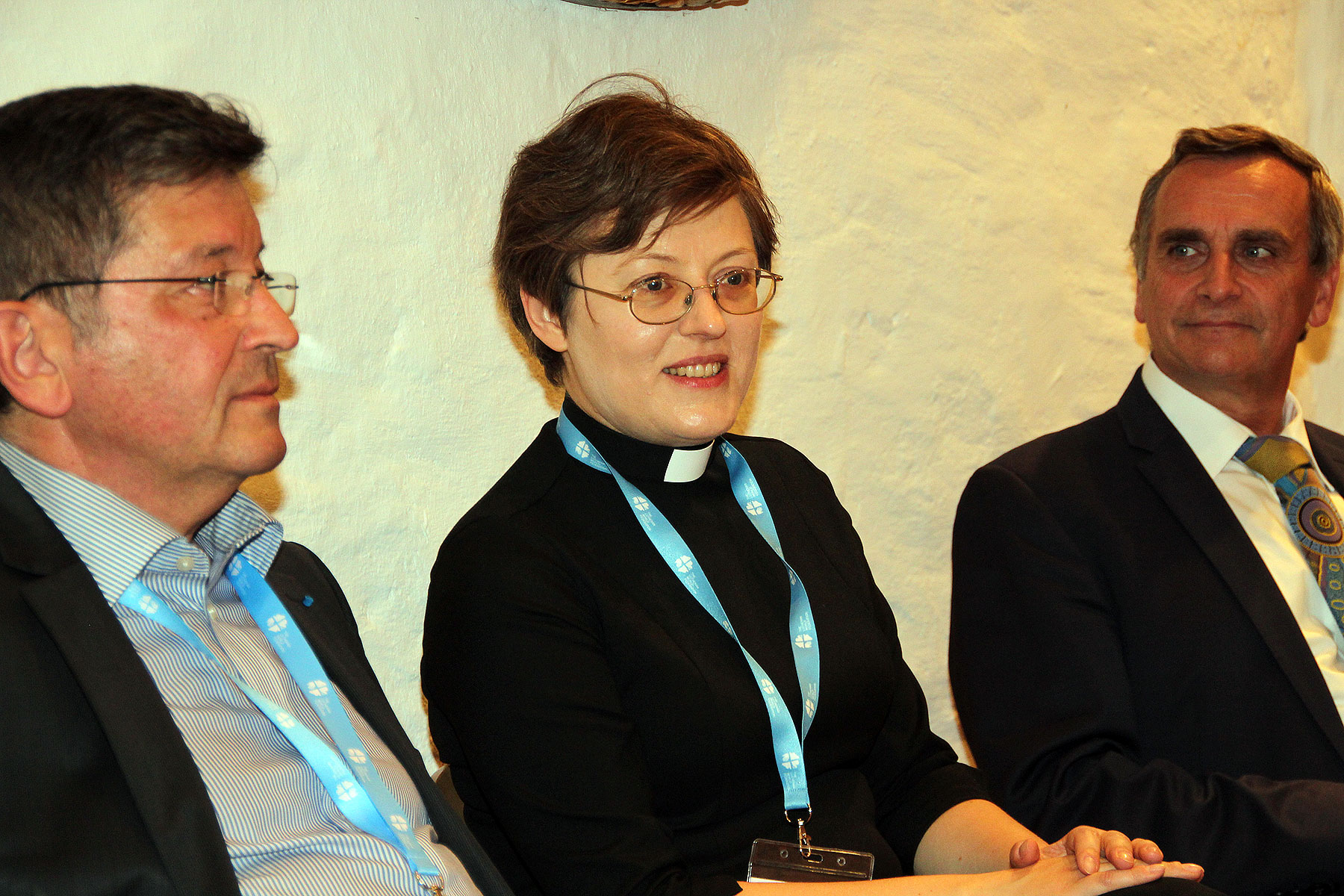 Exchanging experiences of being a Lutheran church: (from left) Christian Albecker, President of the Union of Protestant Churches of Alsace and Lorraine; Eliza Zikmane, Dean of the Lutheran Church in Great Britain; Oberkirchenrat Michael Martin from the Evangelical Lutheran Church in Bavaria.

A variety of examples for this approach in different contexts in LWF member churches of the region were shared by participants in the consultation.

Christian Albecker, President of the Union of Protestant Churches of Alsace and Lorraine, explained his church's process of redefining the relationships between and the respective roles of ordained persons and laity. This issue is of importance as the number of ordained persons is likely to decrease.

Eliza Zikmane, Dean of the Lutheran Church in Great Britain, pointed out that in her small, multicultural minority church every single person was particularly important. "The different people who come to us feel accepted as they are. And when they actively take part and contribute to congregation life, they feel that it makes a difference.”

Dr Andreas Wöhle of the LWF National Committee in the Netherlands reported on his church's attempts to find "a new language" to talk to secularized people. A lot of courage, imagination and joy in experimenting are needed here to break new ground.

Kristina Kühnbaum-Schmidt pointed out that in the Evangelical Lutheran Church in Northern Germany – which was formed by former churches from East and West Germany – have a heritage of "different spiritual and theological traditions". Making an effort to see eye to eye amongst the church members with their respective history in a divided and reunited Germany was very important. By “confirming the relevance of each other", the partners can enrich each other and remind each other of their visions at the time of German reunification.