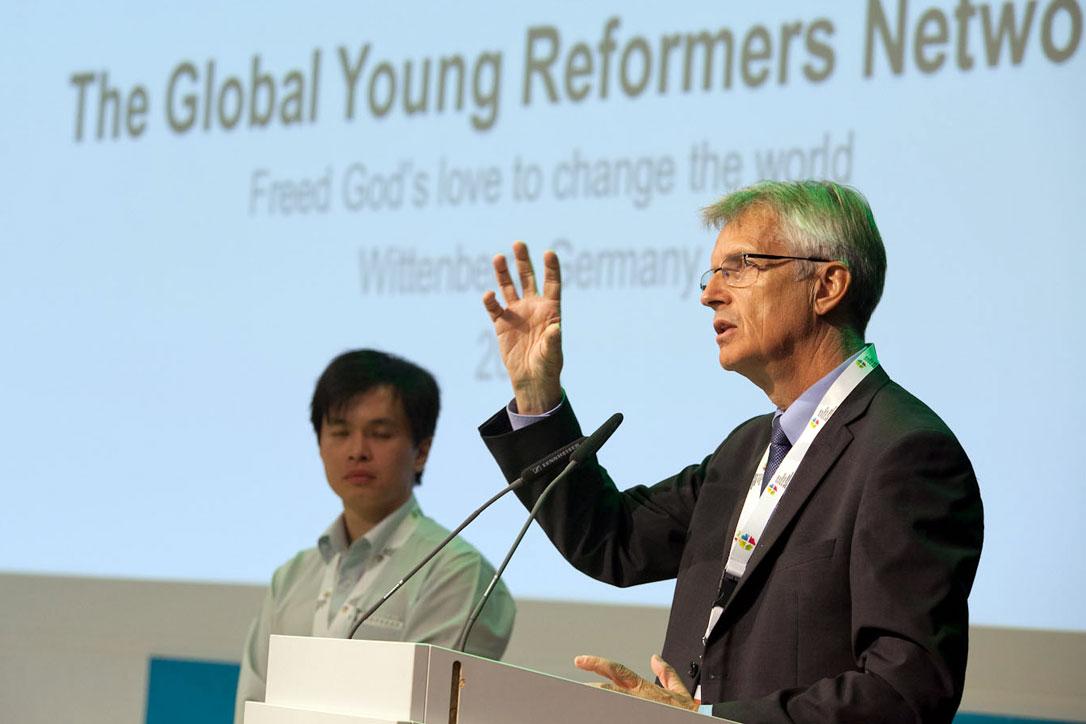 WITTENBERG, Germany/GENEVA, 28 August 2015 (LWI) – The Lutheran World Federation General Secretary Rev. Dr Martin Junge encouraged young adults from the member churches to be creative in discerning ideas that will support the LWF as it projects its future.

“My pledge is that we will listen to what you will bring to us because when we take the next steps, we want to do that with the young people in the LWF,” Junge told a gathering of 140 delegates of the Global Young Reformers’ Network (GYRN) meeting in the city of the Reformation for their first international workshop, 23 August to 4 September 2015.

“Freed by God’s Love to Change the World” is the theme of the workshop, during which participants are learning in panel and small group discussion how the LWF works with its member churches and relates to other Christian and faith bodies; advocacy in issues such as human rights, gender justice and climate change; and international diakonia.

In his presentation about the LWF, the general secretary reminded the youth of their critical contribution to the LWF over the years, saying he considered the gathering in Wittenberg as a strong expression and embodiment of the communion of churches.

“Since its founding, the LWF holds fast to the vocation to come together, so we can meet one another, engage in mutual relations of conversations, and particularly in the present times marked by fragmentation and polarization,” Junge said. His address drew attention to the founding church leaders, who made a commitment to establish the LWF in 1947 in the the post-Second World context.

“They could have chosen to remain in the fragmentation then. But because of their calling of baptism as Christians, like us here, they had a particular insight into the gospel of Jesus Christ—to love and serve the neighbor,” he said.

He encouraged the youth to be guided by the fundamental message of justification by faith alone, to support LWF living out God’s call for mission and service in the world “not because of who we are and do but because of who God is and what God does.”

On how youth representation enhances their contribution in the LWF, the general secretary said the 1984 Assembly decision to ensure a 20 percent youth presence whenever the LWF comes together needs to be complemented in a meaningful way in which youth is also empowered to participate and take decisions.

He said he was convinced the GYRN process, which is built up on such repeated efforts, will help bring young people’s ideas to the LWF for the next 500 years.

The general secretary reiterated LWF’s continued commitment to support youth as already affirmed in their role as leaders of the LWF climate justice campaign, on the LWF Council and other processes.

‘We want to be the life of the church’
news