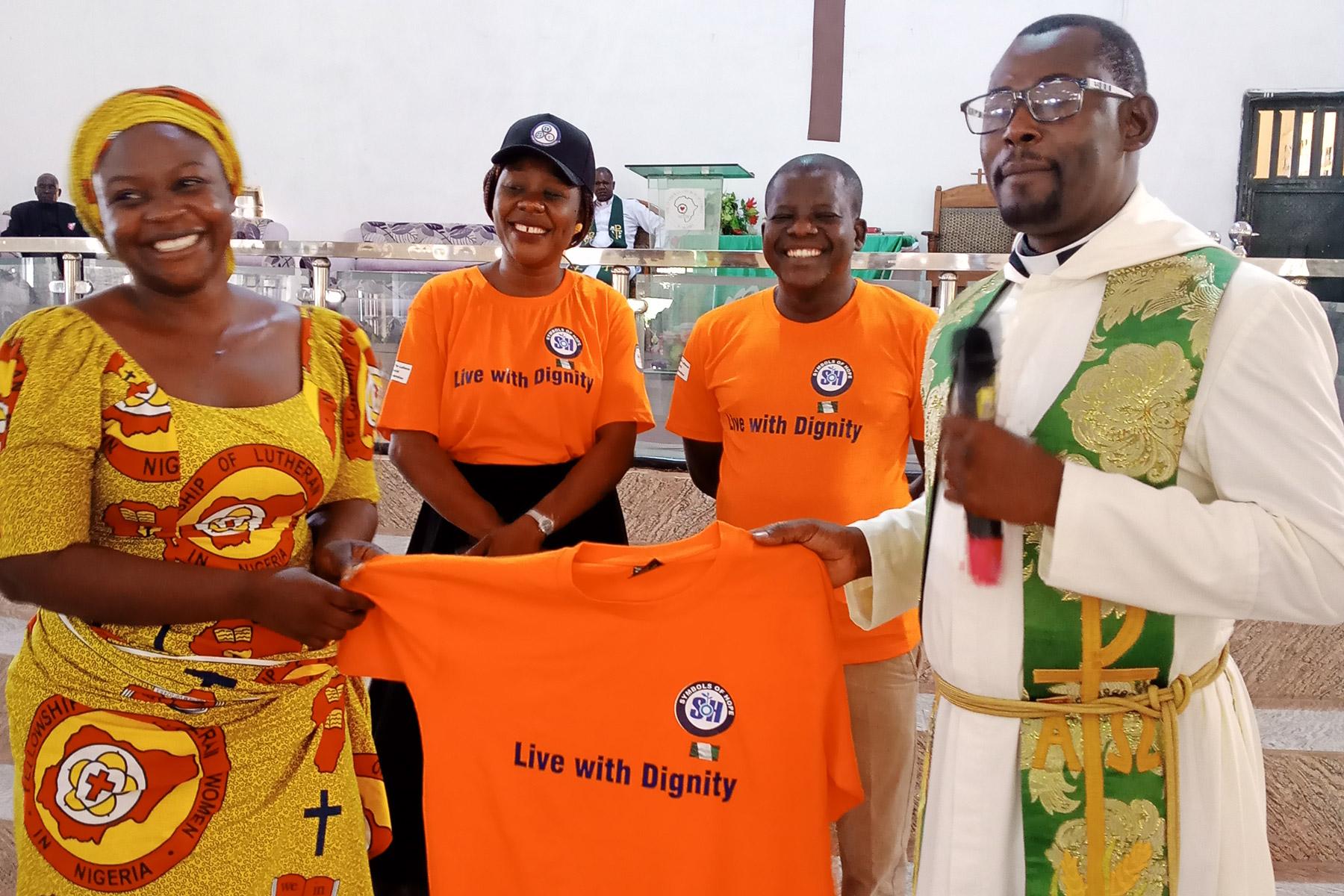 One of the goals of the new course at the LCCN seminary is to increase advocacy activities among youth in schools and universities in Nigeria. Rev. Emmanuel Subewope Gabriel (right) presents SoH t-shirts during an event in the northeastern city of Gombe. Photo: SoH Nigeria

Students and teachers of ‘Symbols of Hope’ in congregations and communities

(LWI) – The June 2022 graduates of the Bronnum Lutheran Seminary (BLS) in Yola, northeastern Nigeria, will include the first batch of students taking a new orientation course on irregular migration and human trafficking.

Offered since last October to all final year students at The Lutheran Church of Christ in Nigeria (LCCN) seminary, the non-credit course has grown out of the church’s Symbols of Hope (SoH) program, focusing on advocacy and diaconal actions to stop human trafficking within the West African country and beyond. The Lutheran World Federation (LWF) supports the initiative involving three of its member churches in Africa, including the Ethiopian Evangelical Church Mekane Yesus and the Evangelical Lutheran Church in Zimbabwe.

The BLS course provides orientation on three topics: migration and the Bible; the church’s response to human trafficking and to gender-based violence; and trauma healing and psychosocial support.

LCCN pastor and SoH Nigeria national coordinator Rev. Emmanuel Subewope Gabriel is part of the BLS faculty team that developed the course, with two objectives. Firstly, “We want to equip the church with pastors, evangelists, teachers, diaconal workers and community leaders who understand irregular migration and human trafficking and the risks involved,” he said. In addition, “the graduates are expected to build an audience that can explain the Bible for what it is—all inclusive—without allowing culture to undermine the place of women and young people.”

Human beings are not for sale

Human trafficking is not just about leaving Nigeria to go to Libya and then crossing over to Europe for example, Gabriel said. Traffickers go to villages and convince parents struggling to provide for their families to offer their young girls for jobs in the city, but these children end up in sex work or domestic servitude. “Our goal is to make sure the seminarians understand that context better and can explain to congregants and community members that human beings are not for sale, and that human trafficking affects not just the body of Christ, but the society at large.”

According to a 2020 Nigerian government survey on awareness about the dangers of irregular migration in the states of Delta, Edo, Imo and Lagos, returned migrants, irrespective of gender, reported facing dehumanizing conditions of detention, sexual abuse, hunger, slavery, and forced labor in significant numbers. Across all four states, over 70 percent of returnees indicated having no passports or visas.

Traffickers target mostly jobless youth who pay exorbitant fees for risky trips that sometimes lead to deaths from violence and drowning in inflatable boats across the Mediterranean. But huge numbers also, especially children and minors, are trafficked inside the country itself for cheap labor and servitude, Gabriel said.

Our goal is to make sure the seminarians understand that context better and can explain to congregants and community members that human beings are not for sale, and that human trafficking affects not just the body of Christ, but the society at large.

BLS student and LCCN member Ms Rahab Asama, a parent from Adamawa state, said the course has inspired her to speak to youth. “I am educated better and wherever I have the opportunity, I will chip in. Human trafficking is even happening right under our nose, but it is not taken as seriously as on the international scale.”

In addition to advocacy, the LCCN Symbols of Hope program assists returnee migrants through psychosocial care, skills’ training and income-generating alternatives. More than 700 potential migrants and returnees have been trained in different skills, with over 160 setting up alternative means of earning a living, and psychosocial support has been extended to more than 350 survivors of human trafficking. There are over 210 clergy and diaconal workers who have participated in the program since it started in 2017.

The Lutheran Church of Christ in Nigeria (LCCN) is one of two LWF member churches in Nigeria. The 2.2 million-member church joined the LWF in 1961, and it is led by Archbishop Dr Panti Filibus, who is also LWF President.

The LWF Symbols of Hope initiative started in July 2017 in collaboration with the communion’s member churches in Ethiopia and Nigeria, responding to the high numbers of people from Africa in particular who were migrating to Europe and the Middle East using irregular means. In 2020, the church in Zimbabwe joined the initiative, through which churches raise awareness among potential migrants, and share accurate information about irregular migration and the risks involved. They also provide psychosocial support to returnees including victims of human trafficking, offer vocational training and livelihoods’ support for sustainable income sources.