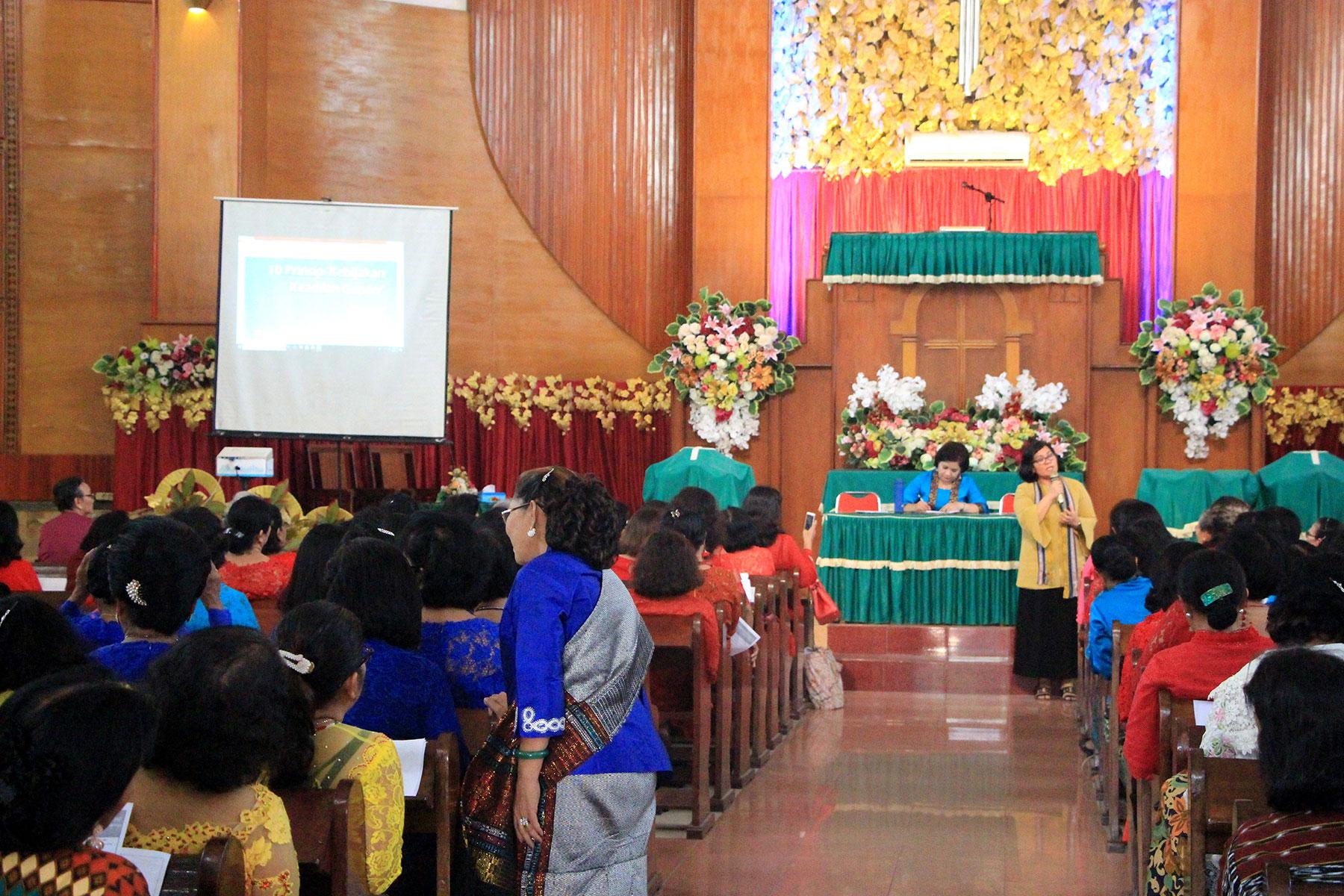 Women from the Christian Protestant Church in Indonesia (GKPI) gathered at a church in Medan City, North Sumatra in August 2019 to hear about ways of implementing the LWFâs Gender Justice Policy in their own local context. Photo: Friztian Tobing

At Generation Equality Forum, LWF pledges to accelerate action to prevent and respond to gender-based violence

(LWI) - As the Generation Equality Forum unfolds in Paris, the Lutheran World Federation (LWF) has pledged to accelerate efforts to prevent and respond to gender-based violence in churches and within wider society, in line with its own long-standing objectives of protecting the rights and dignity of women and girls.

The Forum, co-chaired by France and Mexico and convened by UN Women, in partnership with civil society and youth representatives, is taking place in the French capital from 30 June to 2 July. Its main goal is to take stock and accelerate progress towards gender equality, as outlined in the landmark 1995 Beijing Declaration. At the Beijing conference, representatives from 189 countries adopted a Platform for Action, spelling out a vision of equal rights and opportunities for women and girls everywhere.

During the Forum’s opening ceremony, the LWF joined other faith-based and civil society organizations in one of six Generation Equality Action Coalitions, making public commitments to advance gender equality. As a global communion of Lutheran churches, it is committing to a series of practical measures to tackle gender-based violence, support survivors and promote environments that are free from violence and discrimination.

The LWF commitments include a pledge to step up advocacy and programming towards prevention and response to gender-based violence. They pinpoint the need to work with member churches and country programs, alongside ecumenical and other partners, to counter harmful practices that perpetuate discrimination and injustice. Practices such as female genital mutilation, and early, child and forced marriages “remain a huge challenge” in countries where the LWF operates, the statement of commitment notes.

The LWF also commits to promoting the economic empowerment of women, a key factor in ending gender-based violence. The statement includes a pledge to continue raising awareness and monitoring compliance with the LWF’s own Gender Justice Policy, equipping churches with spiritual and scriptural resources to correct the “power dynamics and socio-cultural norms which relegate women to inferior positions in both church and society.”

The commitments include specific pledges to support churches in the setting up of “vigil groups” that can investigate reports of violence, as well as encouraging congregations to establish networks of men and boys to promote “new models of masculinity” that are sensitive and responsive to gender justice issues.

Our commitment to ending gender-based violence is rooted in our identity as a faith-based and Christian organization.

At country program level, the LWF also commits to ensuring that humanitarian and crisis response plans “include a focus on gender-based violence against women and girls in all their diversity.” Ahead of the Forum, LWF joined with a broad coalition of Faith-Based Organizations highlighting the key role that faith actors play in promoting gender justice worldwide. That statement also reaffirms the commitment of all signatories to the different Generation Equality Action Coalitions and calls for effective partnerships between religious and secular organizations “in order to advance our shared goals for generation equality.”

The Director of LWF’s Department for Theology, Mission and Justice, Ms. Eva Christina Nilsson commented: “Our commitment to ending gender-based violence is rooted in our identity as a faith-based and Christian organization. We are called to promote and protect human rights, ensuring a life of dignity for all, and as a communion of churches, we have a moral and faith imperative to end human suffering.”

Read the LWF Commitments against Gender Based Violence

India: From destitution to a dignified life and self-respect
news
ttt
test news