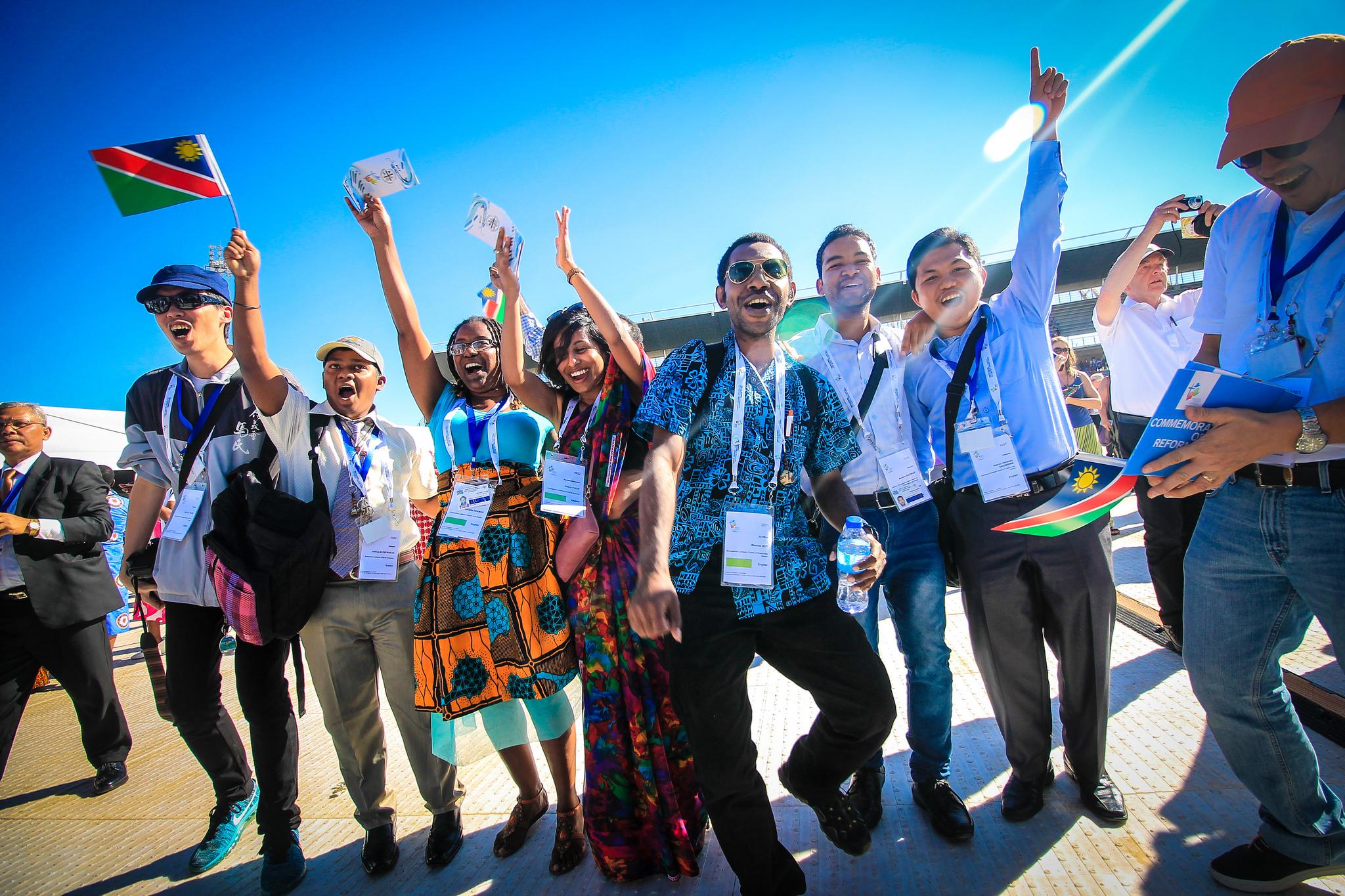 Thousands of Lutherans and guests gathered for a festival of worship, witness, song and word and sacrament in Sam Nujoma Stadium in Windhoek, Namibia on Sunday, May 14th to mark commemoration of the 500th Anniversary of the Lutheran Reformation. Photo: LWF/JC Valeriano

After the global commemoration service for the 500th anniversary of the Reformation ended, a less formal gathering started at the Sam Nujoma Stadium.

The United Church Council of the Namibia Evangelical Churches organized a musical extravaganza called “Adada – Let’s Celebrate” at the stadium in the Katutura quarters on Windhoek, an area that was reserved for black people under South Africa’s apartheid rule.

The show began with Ongoma, a pulsating marimba and percussion ensemble, with an African sound from north of the Namibian border.

“These guys are dynamite,” said the Bishop of the German speaking Evangelical Lutheran Church in Namibia, Rev. Burgert Brand, who moderated the afternoon, shading his head from the harsh Namibian sun with a weathered bush hat.

It was an all Namibian show giving local worshippers and international participants from the Lutheran World Federation Twelfth Assembly a chance to meet in the stadium and celebrate with sounds ranging from the dulcet to the energetic.

The harmonies of the Big K’s gospel singers gave attendees a chance to settle down a little. They were followed by the Omupemepe Gwadema, a group of agile gymnasts jumping over each other’s heads in the way their forefathers did to stay fit while herding cattle.

Some of jumpers leapt without wearing any footwear in their grueling exhibition.

Performers were from lively groups such as the Jaakko Kangayi Choir while the angel-faced youngsters in the Bethel Youth Choir enchanted with some captivating harmonies.

The Martin Luther Gemeente (Community) Choir and Inner City Choir gave worshippers the chance to wind down a little with more toned down church-style singing in a similar pattern to the Rejoice Messengers Jesus Choir which, however, upped the tempo.

Ms Hileni Muulyou, a Windhoek Lutheran said, “It is such a happy occasion to meet with this international group.”

One of the most powerful groups was the Soli Deo Gloria group, founded in 1987 and immaculately clad in claret tops, many of the women members in the large choir wearing Herero bonnets like spinnakers, and traditional skirts.

So lively was the choir's performance that outgoing LWF President Bishop Munib Younan, a man known for his spontaneity, said, “Let’s dance.”

He had his successor, the LWF president elect Archbishop Filibus Musa from Nigeria and other bishops on the floor with him, clapping and swaying in dance. Soon more people joined.

It was getting to four o’clock, visitors starting to drift away, having been at the stadium in the midday sun for seven hours, when Bishop Brand announced the last group, “a little more of Namibia’s special warm hospitality.”

When the Black Melody Cultural Group jigged onto the main stage and began their powerful stomping dancing, all were craning for a closer look at swaying Namibians in indigenous peoples’ attire whose dancing was entrancing, providing foreign visitors with a rare glimpse into Namibian traditional dance.

Bishop Brand concluded the day by thanking the Lord for the grace and testimony of the performances.

A chance for greater awareness about freely-given salvation
news