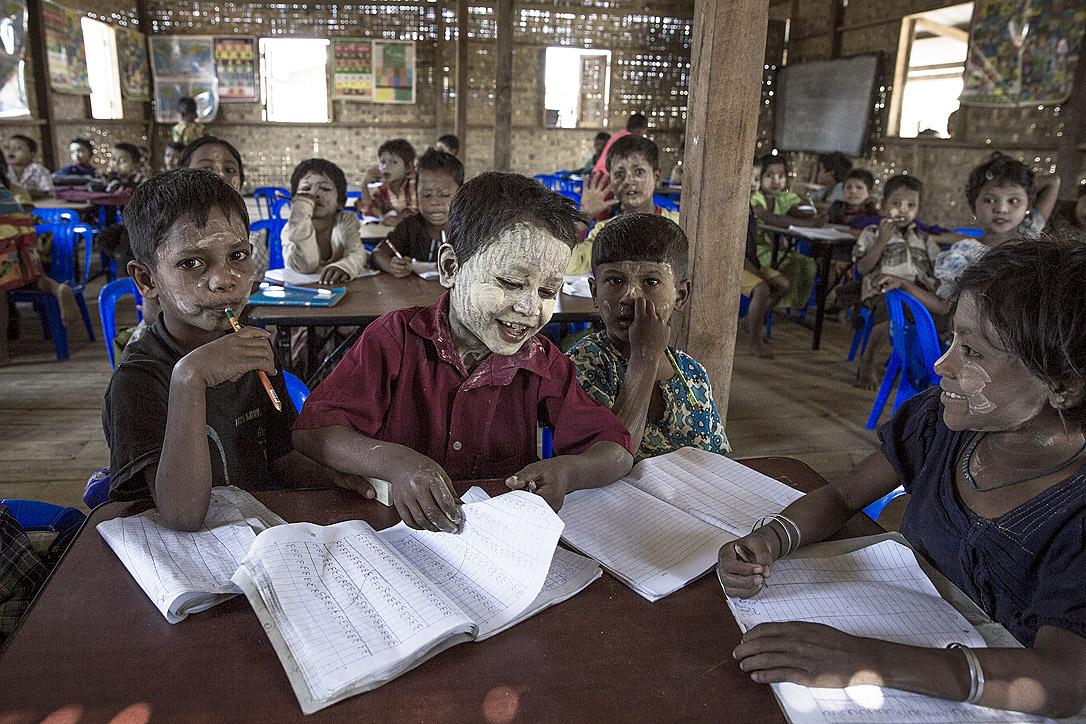 Back to School for Students and Teachers in Rakhine State

(LWI) – U Kyaw Soe Aung sits with his legs crossed on a wooden floor of a Child Friendly Space in the camp for internally displaced persons (IDP) of Set Yone Su. His 10-year old son, Mg Aung Than, attends a school nearby – happy to be back after the school had closed for more than a month due to an evacuation of staff.

The Lutheran World Federation has resumed implementation of its programs in Rakhine state, Myanmar and is now fully operational again. LWF was forced to temporarily suspend activities and evacuate their staff when Violence against international organizations broke out in Sittwe town on 26-27 March 2014. Mobs attacked the premises of 14 organizations, including the LWF’s, destroying office equipment, furniture and documents.

All staff, including those forced to evacuate, is now back on duty. For security reasons, the governmental Emergency Coordinating Committee (ECC) now has directed all international NGOs to relocate to the southern zone of Sittwe town. This action is viewed as segregation that will render difficult communication and longer-term community building.

The LWF has moved its office to the Southern zone of Sittwe town and all staff is now living in nearby communities. In spite of the unrest, LWF has begun camp coordination and management programs for three additional camps now assisting over 30,000 IDPs.

Investing in The Future

To U Kyaw Soe Aung is devoting all his power to make sure his children can continue the education. "I used to work as a teacher to the children of my village. I taught all the subjects in private schools and also at my home." he recalls.

After the clashes between Buddhist and Muslim communities escalated in 2012, U Kyaw Soe Aung’s village was burned and he became a refugee in his own country. Now the majority of villagers live in the IDP camp. Here, U Kyaw Soe Aung made his children’s education a top priority. "Education is everything” he says. “I couldn't afford educating my oldest son thus now he is unemployed. So, I decided to make my youngest children educated no matter what happened."

LWF Myanmar has facilitated Education in Emergency (EIE) in Sittwe since late 2013 funded by the ACT Appeal. To implement educational activities, LWF Sittwe coordinated with UNICEF, Save the Children and the Department of Education, who are the only agencies for education involved in IDP camps.

Making a Difference in Children’s Lives

With the aid of Department of Education of the Rakhine State, LWF will also conclude teachers training in May. "I want to make life of children beautiful, that's why I became a teacher,” says Ma Swe Swe Naing, 20, gazing over the dusty yard of a temporary school in the camp where her students are playing around the makeshift bamboo building.

Ma Swe Swe Naing is one of the volunteers recently trained by LWF Myanmar. Her job is to ensure the children of the Oh Taw Gyi camp can read, write, count and pay respect to each other:  "If a person is educated he or she can consider the difference between the good and the immoral.” she says.

Apart from teaching, Ma Swe Swe Naing thinks that school is also about fun and joy. "One of my favorite personal school memories is when I went to see a football match of my village team. The next day I had a mathematics exam, but I decided to watch the match and our team won. It was such a happy day, though I barely passed the exam,” the teacher reminisces smiling. Ma Swe Swe Naing wants to make sure that the children in the IDP camp, despite the unrest in their country, will also have joyful memories from their school years.