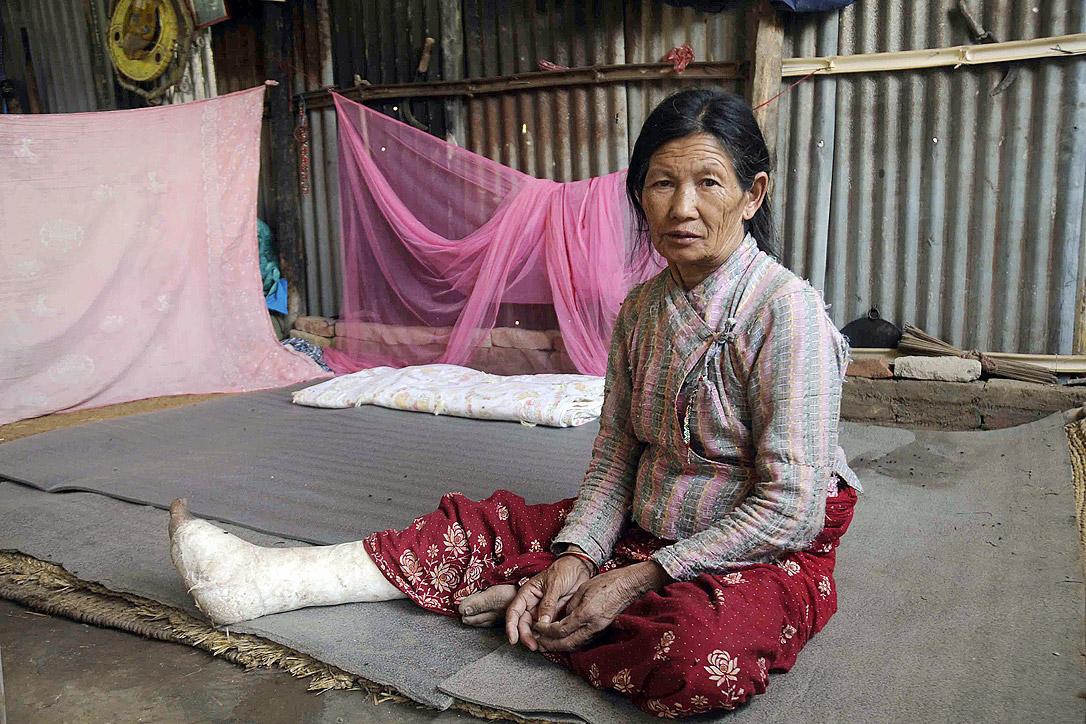 Kanchi Shrestha, 71, nurses her broken leg in a makeshift shelter. The LWF has helped Shrestha and her extended family and will help them re-build their homes. Photo: LWF Nepal

KATHMANDU, Nepal/ GENEVA, 29 July 2015 (LWI) – Three months after the earthquake in Nepal, the need for more durable shelter solutions has become a priority.

“The emergency work has entered into the early recovery phase. We have begun to construct temporary shelters with zinc sheets and local building materials,” Ram Sharan Sedhai, communications officer of The Lutheran World Federation (LWF) Nepal says. “The people have gradually recovered from the horror. They have started planting crops and taking care of livestock. For many, life is returning to normality.”

However, this is not the case for many people in the districts worst affected by the earthquake. “In Gorkha, Sindhupalchok, Dolakha and Rasuwa districts, many people are still living without proper settlements and under tarpaulin sheets,” he says. “Luckily there have been no outbreaks of communicable diseases.”

The monsoon is slowing the aid work. Many villages are inaccessible due to landslides, and aid transports get stuck in the mud on the unpaved mountain passes.

Priority is the most vulnerable

LWF is constructing temporary shelters in the worst affected villages in Rasuwa, Sindhupalchok, and Dolakha districts and the districts of the Kathmandu valley. “We prioritize Dalits, women-headed households, elderly people, ethnic minorities and people with disabilities,” Sedhai says.

One of them is Rama Devi Shrestha, 49, from Shankarapur, Sanagaun. Her house collapsed on top of her. “I was lucky that I only injured my legs although I was buried in the debris,” she recalled that fateful midday on April 25. “The doctors have told me that I can walk again in six months.”

Meanwhile, however, there is no-one to take care of her. Rama Devi Shrestha’s husband died a long time ago. While she was rushed to the hospital, a heavy aftershock destroyed what was left of the house he had built for them – and the entire neighborhood.

Her son, like many young men, left to find work abroad. He still has to pay back the loan he took to pay the ticket to Malaysia. Rama Devi Shrestha needs shelter, crutches and medical treatment, which she cannot afford.

The earthquake has also upset the tender balance in the life of her neighbor, Kanchi Shrestha. The 71-year-old woman broke her leg when falling during the earthquake. The injuries only heal slowly. “The doctor said that it is very difficult to mend a broken leg at this age,” Kanchi Shrestha said. “I want to walk again.” While her son and his wife worked to sustain the family, Kanchi Shrestha used to take care of her granddaughter, a five-month old baby. With an injured leg, that is no longer possible.

Families like the two Shresthas’ need various kinds of assistance. LWF has been providing them with food, tarpaulins, mattresses, blankets, hygiene kits and water buckets with water purifiers. They also receive milk powder for the baby. LWF will help them rebuild their homes.

Until now, LWF has given aid to more than 21,000 households in Nepal. Together with Islamic Relief Worldwide, the team has started to provide corrugated iron sheets to families who lost their homes in Rasuwa district, which will be used for medium term shelter against the heavy rains of monsoon. The ACT Alliance Nepal Forum has provided relief items to 60,000 families affected by the earthquake.

As part of the emergency response, LWF Nepal has also implemented community-based psychosocial support. Working with and through community leaders, it aims to strengthen the resilience of the people and villages, improve their coping mechanisms and take care of their psychosocial wellbeing.

LWF has mobilized and strengthened existing networks and social organizations in communities impacted by the earthquake.  It plans to reach about 14,000 people with this special kind of care. Ideally, the networks will become sustainable structures and continue to improve life for people in difficult positions long after other projects have ended.

"I never thought I would remain alive. Although my house is broken down, my desire to live life has not been broken," Rama Devi Shresta says, while looking at her daughter-in-law and two grandchildren. None of her relatives were injured in the earthquake. To her, that is the most important thing.