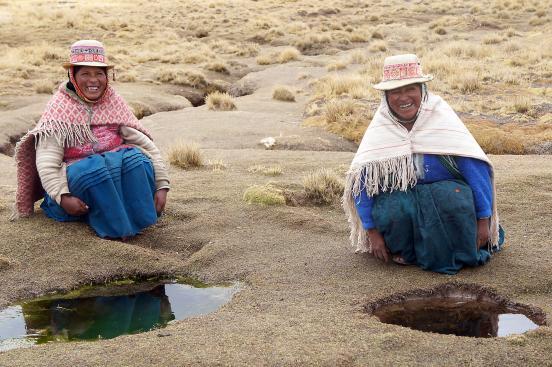 Thanks to an LWF-supported project to bring piped and clean drinking water to the Andean highlands, Filomena Huanaco Casilla (left) and Rosenda Challco Barrera will no longer have to depend on natural but unsafe water sources in their remote village. Photo: LWF/I. Dorji

(LWI) – The Lutheran World Federation welcomes the adoption of the United Nations Sustainable Development Goals (SDGs) as a sign that the world community has not abandoned the vision that every individual should live in dignity.

“Lutheran churches and the LWF have for decades been involved in diaconal activities, seeking to improve conditions of communities. The SDGs represent a new impulse to join hands with other actors committed to the same purpose,” said LWF General Secretary Rev. Dr Martin Junge.

“We look forward to using the SDGs as a compass to help direct our efforts to promote human dignity, to welcome the stranger, and to serve those who are the most vulnerable,” he added.

More than 150 world leaders attending the UN Sustainable Development Summit in New York, 25-27 September, adopted the ambitious SDG agenda that includes 17 goals and 169 targets to wipe out poverty, fight inequality and tackle climate change over the next 15 years.

The UN stated that this “momentous agenda” would help launch action by the international community and national governments to promote shared prosperity and wellbeing for all people over the next decade and half.

Junge noted that the previous UN Millennium Development Goals helped to focus attention and resources on improving lives. The SDGs, he emphasized, include elements that the LWF has found to be critical to development, including a rights-based approach, gender justice and accountability.

At its Council meeting in June, the LWF affirmed support for the SDGs, which include good governance (transparency, accountability, anti-corruption), justice for the poor and equality (equal access to essential services) and peacebuilding.

The governing body urged LWF member churches to stay informed about the SDGs and advocate for their full funding and implementation. Citing cooperation with several UN agencies in humanitarian response and development work, the Council noted that the LWF as a global communion of churches is especially well placed to promote the SDGs from a diaconal or service perspective.

“The UN recognizes the critical role of faith-based organizations in the attainment of the 17 goals of the SDGs,” Junge said following the UN summit.

“It is important that faith-based organizations join this call, thereby offering their critical perspectives on what is being identified as development, and the premises on which such understanding rests,” he concluded.