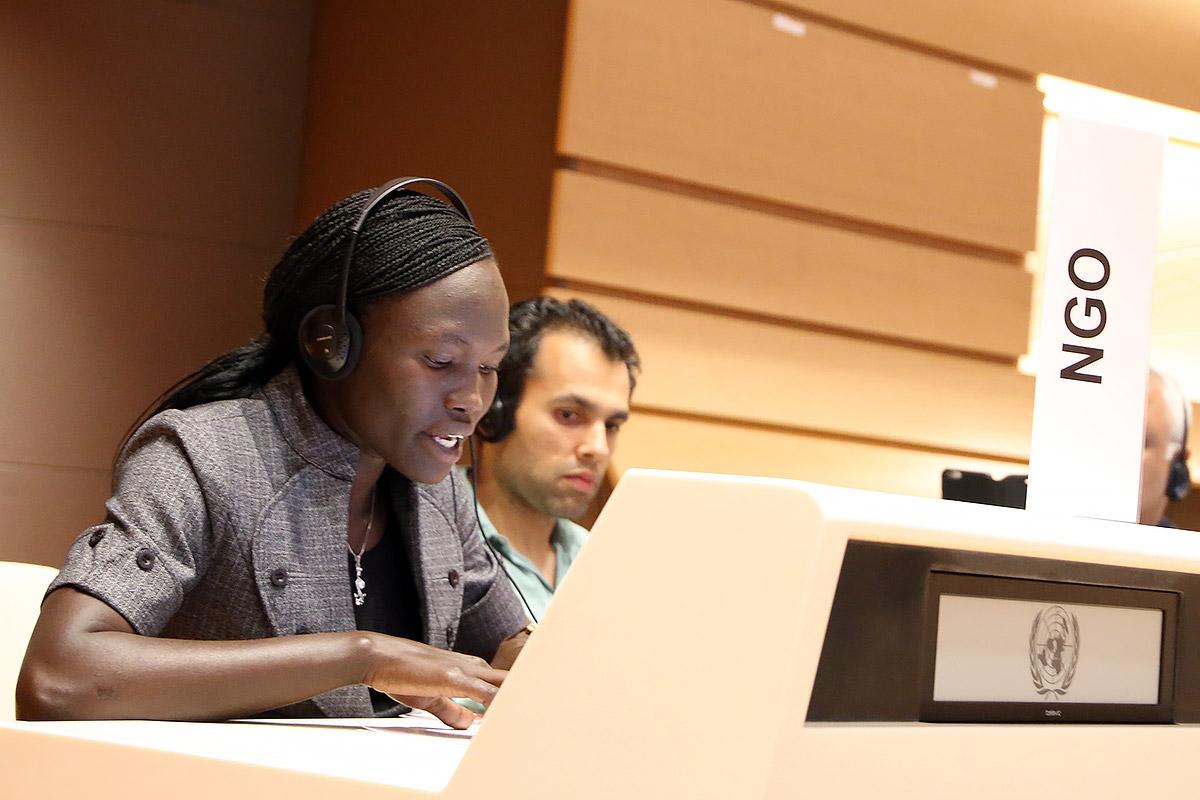 (LWI) - Olympic athlete and refugee from the Kakuma refugee camp in Kenya, where the Lutheran World Federation (LWF) works, Rose Nathike Lokonyen’s story quickly drew the attention of the international participants at the 5th formal consultation on the Global Compact on Refugees when she began to speak.

The young athlete and refugee gave a statement on behalf of LWF and International Council of Voluntary Associations (ICVA) on 13 June at the Palais des Nations.

As soon as she said, “My name is Rose Nathike Lokonyen, I am a refugee and an Olympic athlete from South Sudan living in Kakuma refugee camp in Kenya,” the assembly hall packed with diplomats from every corner of the globe pricked up their ears.

“I just arrived from Kenya this morning to participate on the fifth formal consultation on the Global Compact on Refugees. I thank the Lutheran World Federation for supporting me to come to Geneva and ICVA for giving me the slot to speak.”

Until three years ago, Rose Nathike Lokonyen, 25, barely knew the talent she had. She had never competed in a sports event. She fled the war in South Sudan when she was eight years old.

Then, in 2016 she was one of ten refugee athletes, five of them from South Sudan, to compete at the Summer Olympic Games 2016 in Rio de Janeiro, Brazil. Having been a student at the LWF schools in Kakuma refugee camp, as well as an LWF volunteer worker for girl’s rights, she also delivered a statement to LWF leadership and Pope Francis in Malmö arena.

In another historical event in 2016, there was the New York Declaration for Refugees and Migrants, to which all 193 Member States of the United Nations agreed that protecting those forced to flee and supporting the countries that shelter them are shared international responsibilities that must be borne more equitably and predictably.

The Declaration gave, the UN Refugee Agency (UNHCR) the task of building on the Comprehensive Refugee Response Framework (CRRF), to develop a “global compact on refugees.”

UNHCR has been engaged in consultations with governments and other stakeholders to develop the compact. The High Commissioner will propose the text of the GCR in his 2018 annual report to the UN General Assembly and the compact will be finalized next month.

That compact will not be legally binding, but States and NGOs agree it will have a huge impact on how countries treat refugees.

Rose Nathike Lokonyen was the only refugee to speak on the day on behalf of the LWF for ICVA. She said this kind of recognition was important to people who had been displaced from their homes:

“It was such an empowering experience for me to be the flag bearer for the Refugee Olympic Team at the opening ceremony. Two days ago, I attended the first ever TED talk in Kakuma refugee camp organized by the UNHCR where we heard many inspiring stories from refugees,” she said.

When our voices are heard and our priorities are taken into account in global policy-making processes, refugees will thrive and contribute socially and economically to development of their host countries as we already see in some places.

“When our voices are heard and our priorities are taken into account in global policy-making processes, refugees will thrive and contribute socially and economically to development of their host countries as we already see in some places,” said the young woman, who specializes in the grueling 800-meter race.

Earlier at the 13 June hearing Volker Türk, the UN Assistant High Commissioner for Protection presented the third draft of the global compact on refugees. He said the hearing had heard 188 submissions so far from the Member States and NGOs.

After telling her personal story Nathike delivered the statement on the compact saying that the NGOs she represents “appreciate details on follow-up measures.”

“Similarly, we hope the GCR can specify what is meant by ‘collective outcomes’ or suggest a timeline for reaching a shared understanding of outcomes and context-specific targets,” she noted.

Nathike also said that “we believe the draft still fails to emphasize accountability towards refugees. Promoting accountability will particularly require facilitating the participation of refugees in national and regional refugee coordination structures, where they can directly influence program decisions.”

Joint Catholic-Lutheran Commemoration of the Reformation