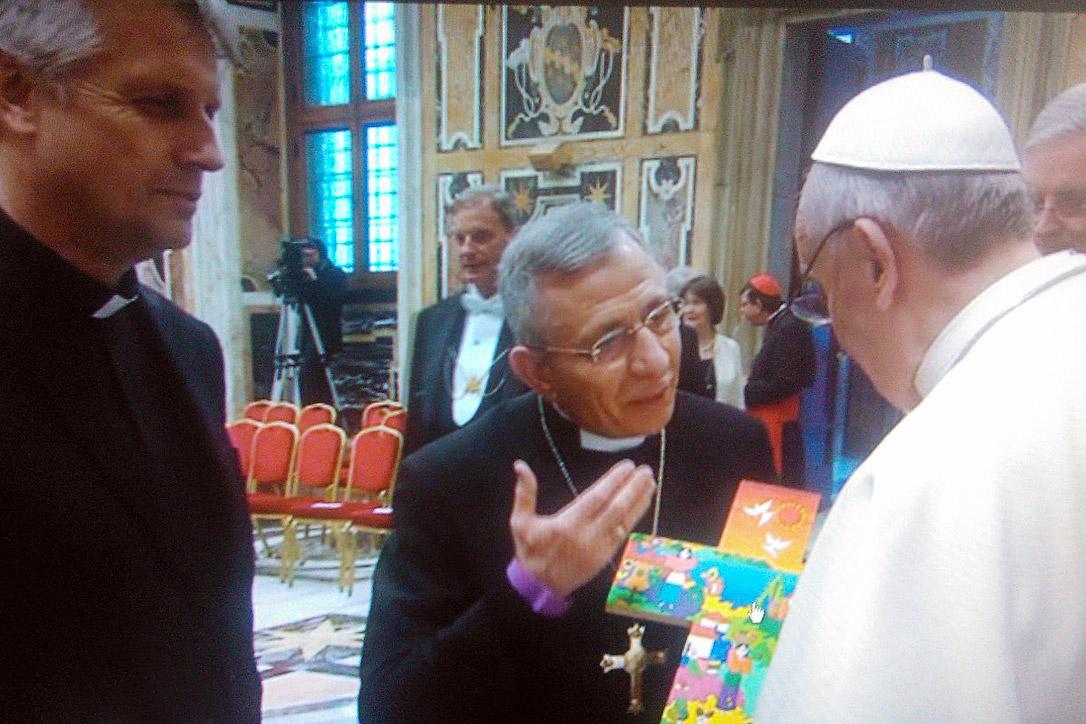 (LWI) – The Lutheran World Federation (LWF) President Bishop Dr Munib A. Younan has called on Lutherans from around the world to join him in praying with Pope Francis, Israeli President Shimon Peres and Palestinian Authority President Mahmoud Abbas for peace in the Middle East on Pentecost Sunday.

During his visit to Jordan, Palestine and Israel last month, Pope Francis secured a promise from Peres and Abbas to meet with him at the Vatican to pray together for peace on 8 June. Younan, also Bishop of the Evangelical Lutheran Church in Jordan and the Holy Land is the only non-Catholic leader from Jerusalem invited to be part of the delegation.

“I believe it's prayer that can change our world and this is the reason that I would say very clearly that, as the Pope is praying with Jewish chief rabbis, with the Muslim mufti of Jerusalem, with some of us Christian leaders there, as well as with Mr Peres and Mr Abbas, I would ask all the Lutherans in the world to support us in their prayers during Sunday services that God will change the minds of people towards peace,” Younan said.

He underlined the importance of the LWF not only in joining him in prayers at the Vatican but also the fact that “for more than a quarter of a century, the communion has made decisions that only support peace based on justice for both peoples.”

The LWF Council resolution from June 2012 called upon member churches to advocate for a halt to “expansion and creation of settlements.” The Council also urged an immediate resumption of peace talks that should lead to resolving the final status question about the conflict, end the occupation, and enable a viable Palestinian state alongside Israel, with peace and security for both Israelis and Palestinians.

“For me, when I go to pray as a Bishop of my church, I am emphasizing the role of my church in building peace in this country, either through education, through interfaith dialogue, or through our reconciliation ministry,“ Younan said.

“At the same time, I know that I have a communion behind me that is serious to see a change in the current situation.” Referring to the 142 member churches of the Lutheran communion, he added, “They believe in justice for this country. They want both nations to live side-by-side, with their own states, on 1967 borders, with peace and justice and reconciliation and equality. And they want to see that Jerusalem is a shared city between three religions and two nations. When I go to the Vatican, I know that I'm not alone.”

During his 24-26 May visit to the Middle East, Pope Francis visited key sacred places in the old City of Jerusalem and stopped to pray in Bethlehem at a section of the Separation Wall.

“For me, what the Pope has done is very symbolic and it's very important. It's very important that there was a Muslim and a Jew with the pope coming here. That we, religious leaders, maybe cannot bring peace to the Middle East, but we can pray and we can be prophetic in speaking out for justice,” Younan said. “Peace based on justice won't come without religious leaders. We have a role to teach our people: to love the neighbor, so that Israelis will see the image of God in me, a Palestinian, and that I will see the image of God in the Israeli.”