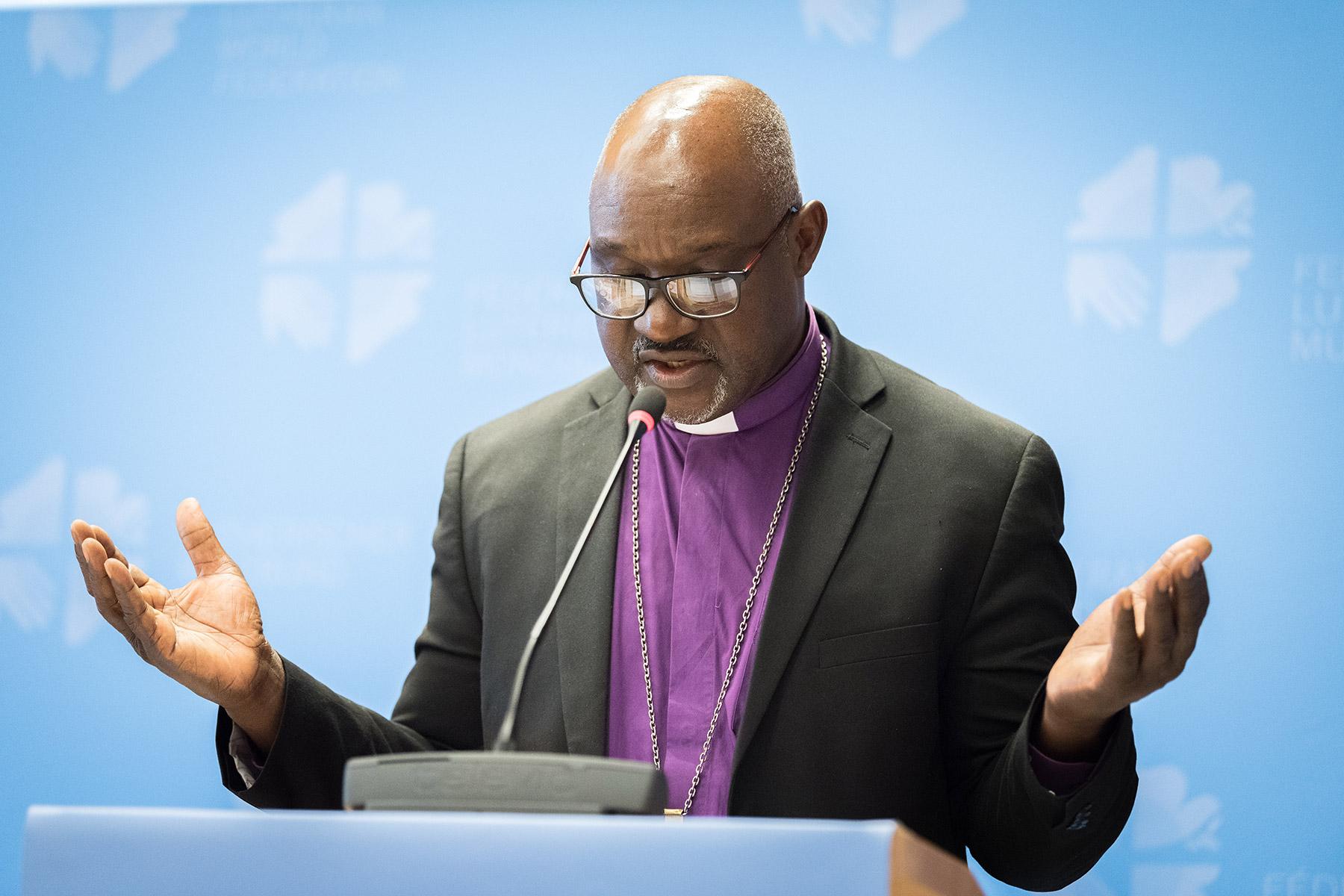 (LWI) – Oppression does not end when we look away from it. On the contrary, by looking at violence, evil, and oppression, we can address it, said the Lutheran World Federation (LWF) President, Archbishop Dr. Panti Filibus Musa, in a Bible study at the 3rd Ecumenical Kirchentag this weekend.

The 3rd Ecumenical Kirchentag took place from 13-16 May. This time it was mainly an online event, gathering thousands of Christians from different denominations in Germany under the theme “Take a look” (Schaut hin) which refers to Jesus’ appeal to “Go and see” in Mark 6:38. President Musa’s Bible study was a pre-recorded video message delivered from his home country Nigeria.

Reflecting on Genesis 6:12-22, the story of Noah and the ark, the LWF president pointed out its connection to the theme of the Ecumenical Kirchentag. “You are gathering under the theme ‘take a look’. And this is what God does in our biblical story, as God observes human violence spreading and unfolding. God does not look away. God looks at it.”

“For the sake of peace, ‘tolerance’ or being politically correct, we often look away from violence. But what sort of peace could this be if it tolerates violence in its midst?” Musa asked. “It is by looking at violence, evil, and oppression that we have the chance to at least take it up, address it, and maybe also transform it.”

As examples of this, he cited the churches’ diaconal and public action to address atrocities in Nigeria and the LWF’s naming of “the unspeakable violence that the people of Syria, Yemen, Afghanistan, Myanmar, Mexico, and so many other countries” are suffering. At the same time, he commended the “strong voice” of the Evangelical Church in Germany (EKD) in naming the “untenable situation and offering practical support to people both on the Mediterranean Sea and in Germany.”

Addressing another issue of concern, Musa cited the unequal access to vaccination against COVID-19. That 75 percent of the vaccines administered until now have been distributed in only ten countries in the world is “an expression of structural corruption and violence that may cost thousands of lives.” Indifference and a lack of solidarity could eventually “become suicidal,” Musa said. “Until all are safe, no one is safe.”

The God of the new beginnings

“God’s disappointment and anger about human’s corruption and how it denies and destroys life violently is huge,” Musa said. However, God does not want the “annihilation of God’s creation” but instead “a new beginning.”

Creation is meant to “come closer to its initial and final intention: to bring forth life anew,” Musa said. “I see here a beautiful parallel to what we see God doing much later, when God offered His own Son Jesus Christ, God’s only Son, so that the world could find life (John 3).”

The rainbow (Gen. 9:12-13) symbolizes the new beginnings “for the world and humankind to come closer to its original meaning and vocation, for life to be transformed towards more justice, more peace, towards being reconciled.” And: “Christ, the Crucified and Risen, is the sign and seal over this promise.”

“There is no inevitability in corruption and violence,” added the LWF President. “It is not what we are eventually being made for. God offers new beginnings interrupting a spiral of violence which would eventually consume everything.”

As baptized Christians, he concluded, we are brought into a “journey of ongoing transformation, living deeper into God’s call and will, and therefore unfolding the full richness of human life.”