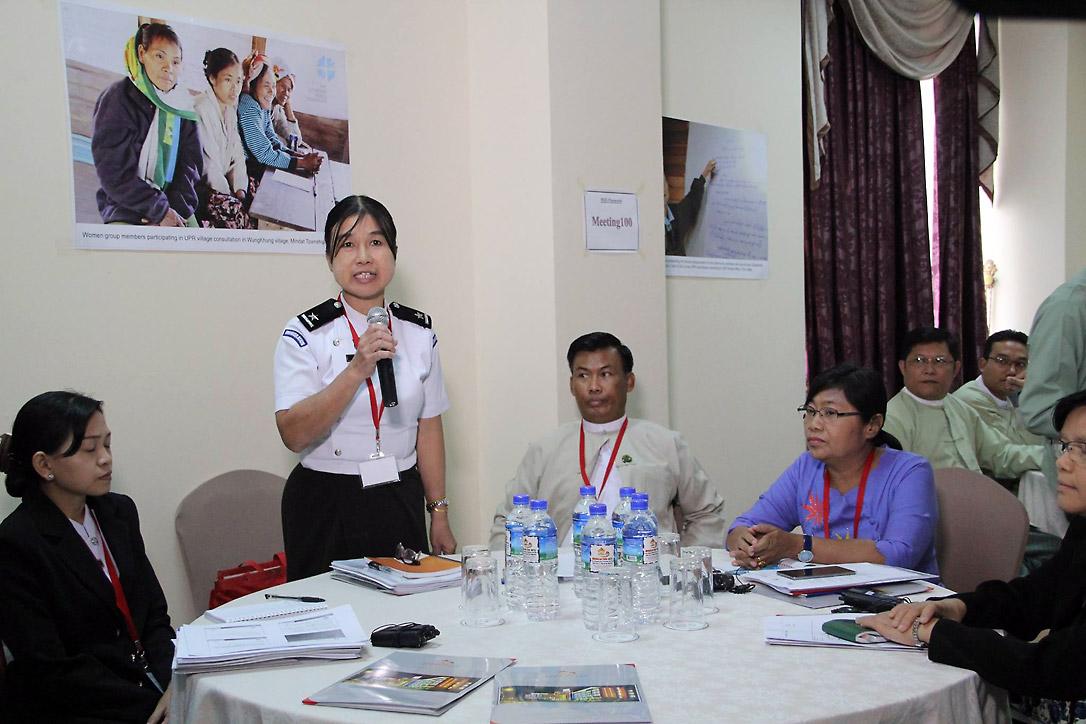 A participant from the Myanmar government contributes to the human rights discussion, at a meeting organized by LWF Myanmar. Photo: LWF Myanmar

Government, civil society draw up recommendations for the country

(LWI) - The major outcome of a recent workshop organized by The Lutheran World Federation in Myanmar is that the government of Myanmar should set up a national steering committee to promote human rights.

The Myanmar National Human Rights Commission and LWF Myanmar jointly brought together high ranking government officials and members of civil society organizations to work out how to put in place new United Nations human rights recommendations for the country.

Participants in the 9 - 10 August workshop included four parliamentarians, high-level directors of almost all government ministries including the Ministries of Defense and Home Affairs, as well as the UN Human Rights Office and the Embassy of Switzerland.

A recent UN human rights review, known as the Universal Periodic Review (UPR), made 166 recommendations which the Myanmar government accepted. Participants of the workshop met to suggest who should lead, follow up and implement the recommendations.

Organizers will submit a report to the State Counselor's Office requesting the government to appoint a national steering committee to lead the process of putting the UPR recommendations in place. It will suggest parliament and ministries appoint a focal person to deal with the UPRs, encourage the government to submit a report voluntarily to show its commitment, and insist the process should fully involve the citizens of Myanmar.

The Head of Political and Economic Affairs at the Embassy of Switzerland in Myanmar said the workshop was an important milestone, which advanced the question of how to implement the UPR recommendations.

Agnès Christeler said the Swiss embassy is open to helping the LWF conduct similar UPR or human rights workshops in the future.

LWF regional representative, David H. Mueller said the workshop was a milestone, noting it was a “new and unique” approach never before tried in Myanmar.

“Although there are many sensitivities, and even tensions between stakeholders, the normative nature of the workshop helped get the participants past those and engage in problem solving and practical solutions.

“Everyone involved agreed that more needs to be done. But they also seemed eager to continue the process. LWF will do its best to keep the process moving forward as part of the local and global UPR project."

The LWF will continue to take part in processes that make progress on human rights for all, he said.

Every four years, the UN examines the human rights record of every country. Myanmar came up for review last year. The LWF was one of a number of civil society organizations to make suggestions for the Myanmar UPR review. Eventually, 166 UPR recommendations were accepted by the government, including calls for measures to improve birth registration and citizen verification, improve the land registration system, improve protection for women, children and vulnerable groups, enhance women’s rights, and combat discrimination and violence against ethnic, religious and other minorities.

The government’s responsibility for respecting, protecting and fulfilling human rights for all people inside its borders was shown, in part, by its goodwill and attendance at the workshop.

“The people of Myanmar have a big stake in the UPR process. They have a role to play in working with government to both hold politicians accountable and to take part in programs that realize and strengthen human rights," Mueller said.