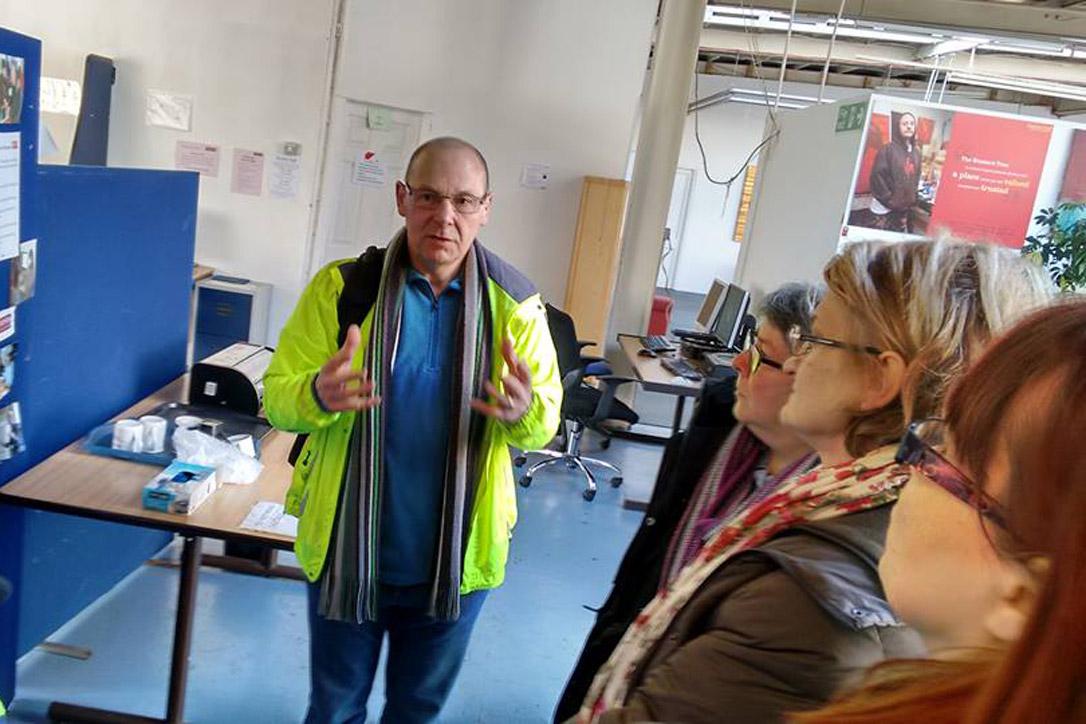 Dave Smith, founder of the Boaz Trust, which works with asylum seekers and refugees in Greater Manchester, explains the organization's work to members of the diakonia

Sharing and Learning Has Strengthened Collaboration among European Diaconal Actors

(LWI) – A “Solidarity Group” that coordinates sharing of practices by diaconal actors across Lutheran churches in Europe resolved at their last meeting to support the German Evangelical Lutheran Church in Ukraine (GELCU) in assisting vulnerable people and those affected by the conflict in that country.

Participants at the 2-6 March meeting on “Convivial Economy” in Manchester established a working group that is looking into options for a solidarity visit to the Ukrainian church. The 28 diaconal actors from 19 countries included Ms Luba Galimova, leader of GELCU’s diaconal work, who expressed gratitude for “the strong wish of the members of the conviviality group to help people in Ukraine.”

The Lutheran World Federation (LWF) European Diaconal Process began in 2011 and its series of workshops is in its second phase of elaborating and sharing concepts and practices of conviviality, the art and practice of living together, in solidary and enabling sustainable communities.

The Manchester gathering incorporated a visit to Salford district where the ecumenical social justice group Church Action on Poverty is working with people experiencing poverty and stigma by encouraging them to share their stories and challenges both locally and through the media.

The conviviality process emphasizes sharing and learning across the different regions in Europe. Still, the need to move together and encourage each other to put the concept into practice by sharing the struggles, assessments and good practices with the wider Lutheran communion is being explored. Two participants from Africa and Asia joined this year’s workshop and affirmed its relevance for all LWF regions.

From the regional working groups, the Central Western Europe diaconal actors said it was important to advocate more in the churches and public arena on how a convivial economy relates to a convivial society. They noted the emerging open public aggression of people living with mental health problems, dementia, learning difficulties, disabilities or those from migration backgrounds. These issues reflect how neo-liberal perceptions and harsh approaches creep into overall public attitudes, and therefore challenge the church and diakonia to raise local discourse at the local level on issues such as debt and dignity, food and dignity, while also engaging in concrete projects and sharing.

The Nordic group members said discussions at parish level will be promoted and the publication Seeking Conviviality: Reforming Community Diakonia in Europe will be used in order to share this new concept beyond the individual approaches. Existing meeting opportunities will provide space for further lobbying and raising awareness.

The global “Solidarity Group” initiative for GELCU was part of the Central Eastern Europe regional discussions which addressed common issues especially war and its link to poverty, debt and migration.

In Ukraine, the post-traumatic problems among soldiers, medical assistants at the war front and their families, need to be urgently addressed by volunteers and professionals, the regional group noted.

Collaboration across countries was emphasized in dealing with the massive influx of Ukrainians to Eastern Hungary where the local communities face the challenge of hosting refuges, overcoming prejudices and raising awareness about the physical and mental situation of refugee life including traumatization. Strategies and concepts for peace making were identified as critical for living together—in families, neighborhoods, towns and church communities.

The impact of the neoliberal economic model on marginalized people, livelihoods and social security across generations was discussed in all the groups. A presentation by Dr Peter Szynka, Diakonisches Werk Hanover, Germany, elaborated how austerity measures affect the weakest in society by deregulating employment, reducing social support structures and individualizing systemic economic problems.

Participants noted that in comparison to liberalized social service businesses, church diakonia still provides stable, reliable and dignified employment. Still, advocacy is needed to raise awareness about the values of diakonia as part of the commitment to justice by both social service providers and the people they serve.

Rev. Dr Eva-Sibylle Vogel-Mfato, LWF area secretary at the Department for Mission and Development (DMD) said the Manchester workshop was another important step in deepening analysis and reflection together on meaningful and sustainable practices of diakonia.

“The overall atmosphere was strongly collaborative, based on growing relationships throughout the five-year diaconal process. The level of reciprocal trust achieved thus far proved to be strong enough to also address conflictual issues, political disagreements and fears, and struggle together over them while staying together as sisters and brothers in Christ.”

DMD leads the diaconal process which in 2016 will focus on convivial theology.

Living together in times of fragmentation
news

‘People on the move’ strategy for diversity
news