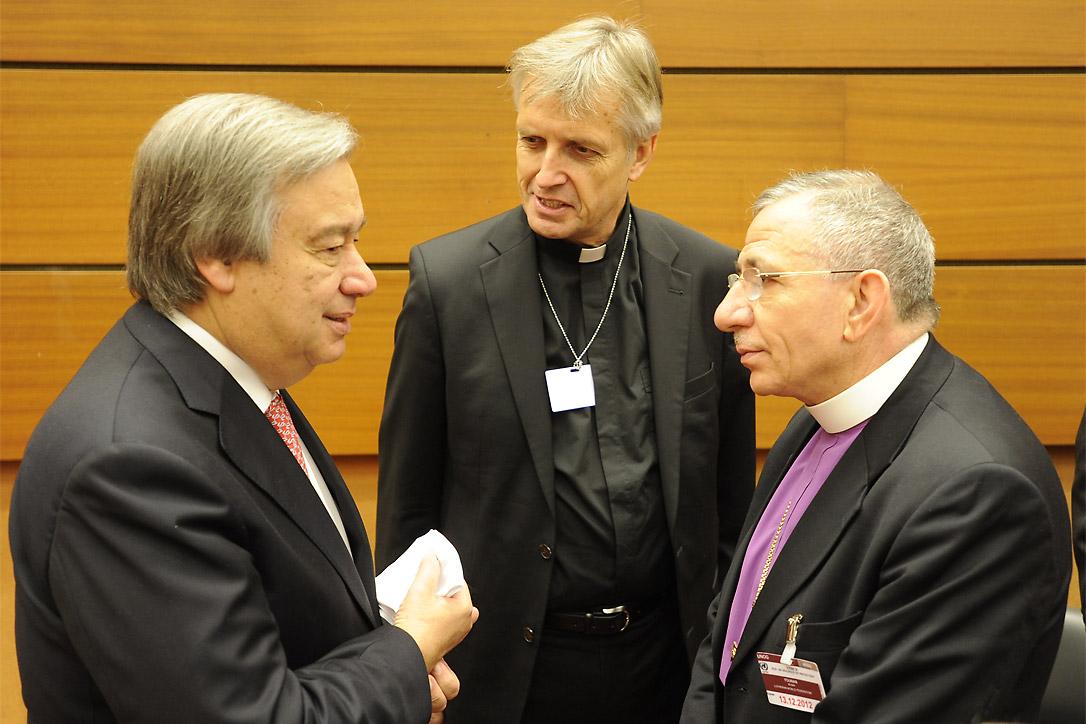 (LWI) - The Lutheran World Federation (LWF) congratulates the new Secretary General-Designate of the United Nations, António Guterres, the former Prime Minister of Portugal. The incoming head of the UN is the immediate past UN High Commissioner for Refugees (UNHCR).

In a joint letter to Guterres, LWF President Bishop Dr Munib A. Younan and General Secretary Rev. Dr Martin Junge pledge their support and pray that God will continue to bless him with courage, integrity and compassion.

Guterres was elected Secretary General of the UN by the General Assembly today following a unanimous recommendation from the Security Council.

“We … deeply appreciated your leadership as High Commissioner for Refugees. You never lost sight of those for whom UNHCR is there to serve. You consistently spoke out for the ‘least of these’, speaking truth to power, calling on those with influence to do the right thing,” they say.

The LWF has worked as a UNHCR partner for many years. Younan and Junge expressed their gratitude for Guterres’ effectiveness in mobilizing great financial, human and political resources in the service to refugees during his 2005-2015 tenure as High Commissioner.

“And you were an inspiring partner, welcoming and encouraging us and other friends of refugees and of UNHCR to do more together than we could have otherwise,” they write.

The LWF letter to Guterres notes that the Lutheran communion was grateful for the incoming Secretary General’s way of engaging with faith communities and faith-based organizations on refugee matters, including through the High Commissioner’s Dialogue on Faith and Protection.

“You helped make for peace by using your convening power to bring together such a broad and diverse representation of the world’s religions. You underlined that … the world’s religions have in common a deep sense of compassion, of love and care for fellow human beings, and a special concern for showing hospitality to the stranger in need.”

In your new role, as you well know, even more will be expected of you. Know that the LWF will be among the many who will strive to support you in your leadership.

The LWF leaders say this background of dealing knowledgeably with the pain suffered by refugees would inspire Guterres for the difficulties that lay ahead of him as Secretary General of the UN.

“In the High Commissioner’s Dialogue, you spoke about how meaningful for you has been the Bible verse: to whom much is given, much is expected. In your new role, as you well know, even more will be expected of you,” the Lutheran leaders recalled. They added, “Know that the LWF will be among the many who will strive to support you in your leadership.”